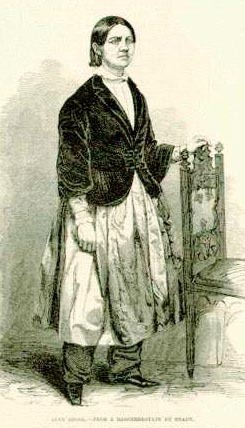 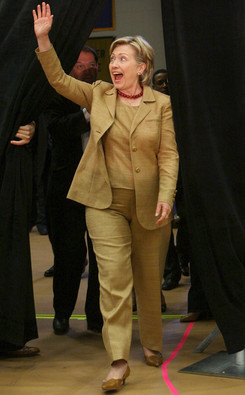 In the past week, two men, arguably the two men closest to Hillary Clinton and her presidential campaign, have offered public revisionist takes on her public persona.

The less egregious was running mate Kaine who, in his co-interview with Hillary on "60 Minutes," interrupted her reasoned dismissal of Trump and GOP-ers' unrelenting attacks on her, with his own defense:

"She's done a good job of letting the, you know, water go off her back on this. That's not the way I feel. When I see this, you know, 'Crooked Hillary,' or I see the, 'Lock her up,' it's just ridiculous."

Caine edges right up to assuming the role of protector - even though she's just said (and has said repeatedly) she doesn't want or need this. Even though she's proven herself over and over that she's perfectly capable of defending herself.

Bill Clinton goes on to paint Hillary (at length) as the object of his romantic pursuit, framed as a determined male quest (in which of course the outcome must be that the man gets the object he desires). In his story, Bill wins big time when she finally agrees to marry him. He calls her a girl more than once and - I just checked the transcript - never refers to her as a woman. Rachel Mallow called his words "shocking and rude." I found them downright demeaning.

When did Hillary get demoted from intelligent, assertive, powerful woman to girl? When did she go from being object of opponents' hate and derision to soft, fluffy, potentially vulnerable female who just may need a big strong man to take care of her? (I apologize to Kaine - he did not step over the line - but his jumping to her defense suggests he might at any time.) Moreover, when did her team - at a critical time when nobody is taking a single step in this campaign without thinking many chess moves ahead - decide her public image needed a little touch-up to make her more feminine, perhaps more "appealing?"

Hillary Clinton has been criticized for nearly everything in the universe, in particular for being cold, calculating, and brazen (all words that would be less critical if applied to a man), but the strong public persona she has crafted and held onto has gotten her this far. Does she have to reveal a softer side now to be elected - even worse, does she need to have it revealed by others?

The women's movement emerging when Hillary was coming of age argued that available options for smart, ambitious women were dismal. The traditional route to success - acting like a man - denied any value to her own gender. The acceptance of traditional female roles - frilly and feminine - risked her ability to be taken seriously. Women of Hillary's generation (I know because it was my generation also) were urged to reject both options and instead to create genuine personas. More importantly, they were cautioned to resist any attempt to be defined by others.

I've always thought that the pantsuits Hillary wears are her chosen in-your-face signature - an wink-wink acknowledgement of what many think she wants to be - the woman who wears the pants, just as the bloomers worn by 19th-century suffragists who donned their imitative male clothing were putting others on notice that they were ready to assume roles and gain rights previously denied them because of their gender.

The bloomers were more than a statement; they were also utilitarian, making the women who wore them more mobile in their quest to enjoy, of all things, riding a bicycle. But the suffragists, wisely, didn't go the whole route of adapting actual men's clothing - that would have been false. Similarly, Hillary's pantsuits do not make her a man, but they do make her more mobile: look how she's climbed all the way to the glass ceiling - without showing her girly panties.

Bill says we're getting the real Hillary, not the cartoon Hillary that Trump and GOP-ers love to demean, but the Hillary portrait he has drawn is just a cartoon of a different flavor. Hillary Clinton doesn't need to be dressed up like a girl to get elected president, not by her husband, not by her running mate, not by anybody but the woman herself.