Mathematics is the queen of all sciences because it is the foundation and language of the scientific world. At its core lies an ever increasing set of facts (theorems) which have been proved without a shadow of scientific doubt. For every theorem, there exist multiple, equally interesting and significant unsolved problems. To explore Mathematics, often, one needs only imagination, some skill, and a bare minimum list of gadgets (pen, paper, pencil) 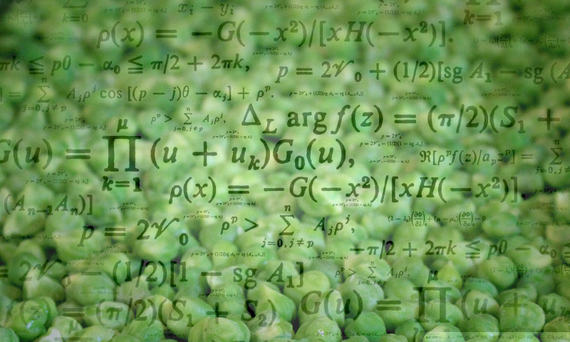 We are what we eat and food is my metaphor for life. To prepare good food, often, one needs only imagination, some skill, and a bare minimum set of (good) ingredients.

Here are my food theorems, in no particular order, inspired by some well-known theorems of Mathematics. They are presented light-heartedly and without proof because unlike Mathematics, when it comes to food, one person's proof is another's counterexample.

2. Traveling Salesman Problem
A traveling salesman's biggest problem is that he rarely enjoys a home-cooked meal, but he can rest assured that his travel is efficient and easy on the wallet.

3. Central Limit Theorem
Upon slow roasting in a dry pan, the average flavor of a sample of spices from a large collection of stale spices is within acceptable standards, despite the inadequacy of each individual spice.

4. L'Hopital's Rule
Challenging the limit of a recipe's ratios can sometimes land you in a hospital.

5. Handshaking Lemma
In any food system network, the total number of instances of inflow & outflow of ingredients is equal to twice the number of collaboration links. The vertices consist of consumers, producers, and distributors.

6. Fundamental Theorem of Arithmetic
Every dish is a product of ingredients and steps, including repetitions. The final flavor is unique up to the order of steps and proportions of ingredients.

7. Fundamental Theorem of Linear Programming
Consider the problem of optimizing the flavor of food subject to the constraints of varying, but bounded palates. An optimal solution is the result of adding an extreme ingredient or lies along a balanced approach with optimal ingredients and techniques.

9. DeMoivre's Formula
The five senses of any food related-experience (salty, sweet, sour, bitter, and savory) contribute to the most important consideration of good food: taste. In the equation which relates these five senses, it is reasonable to assume that salty=essential (e), savory=i (imaginary unit), sweet = pi, sour = 1, and bitter =0. And just like in the mathematical world, it remains to be shown that salty^(savory*sweet)+sour=bitter. The difficulty will be in defining the operations in the formula as it relates to food and/or its consumption.

10. Binomial Theorem
The sum of all possible choices made in a mom and pop restaurant is a result of the collective power of the two forces.

I'm the Chef & Co-Owner of Cress Restaurant. I am also a tenured Associate Professor of Mathematics at Stetson University in DeLand, FL.