Warning: Don't continue if you haven't read "A Storm of Swords" or "A Feast for Crows."

"Game of Thrones" fans have it rough.

The show, based off of George R. R. Martin's fantasy book series, is known for shocking its fans with plot twists and major character deaths each week, but if you aren't part of the "A Song of Ice and Fire" book club, it takes a supernatural form of discipline to steer clear of spoilers for every episode. Avoiding the Internet, shutting down social media apps on your phone and generally cutting yourself off from any form of human interaction is simply necessary if you're planning to watch the latest airing on DVR or if you just want to be surprised on Sunday nights.

And now, non-book readers should add one more thing to their "GoT" fasting regimen: Instagram. The photo-sharing service that launched the age of the selfie is usually a great way to keep up with some of our favorite members of the "GoT" cast -- if you haven't checked out Maisie Williams account yet, you're missing out on the best Hodor photo ever! -- but what happens when we can't even count on cast members to keep the secrets of the show under wraps?

Lena Headey, who plays Cersei Lannister on the HBO drama, might have just snuck a major spoiler past us with a photo she posted over a month ago on her Instagram account. 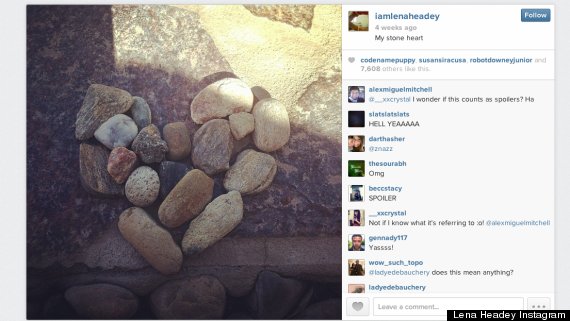 A seemingly harmless picture got fans buzzing about potential spoilers for the season finale. Headey's caption "My Stoneheart" might be a reference to a character in the series "Lady Stoneheart." You'll recognize her better if we called her by another name, Lady Catelyn Stark. Although she was killed during the events of the Red Wedding, Lady Stark is brought back to life in the books to seek her bloody revenge on those who wronged her family. So, did Headey just foreshadow one of the biggest plot twists for the fourth season of the show? We just don't know.

Honestly, although we're just as guilty as the next fan trolling the Internet for any hint about what's next for the series, we doubt Headey would slip up and post something so revelatory about a major character comeback. In all probability, she, like many other cast members, has no idea if/when they'll bring Michelle Fairley back (it's not uncommon for something that big to be kept from pretty much everyone, even actors on the show). And even if she did, we doubt producers would let the photo stay on her Instagram account if they thought it would ruin anything for both TV and book followers.

But since we're not ashamed of a little speculation, if this is a tease of what's to come for the last episodes of this season, can we say how excited we are that momma Stark might rise from the grave!?