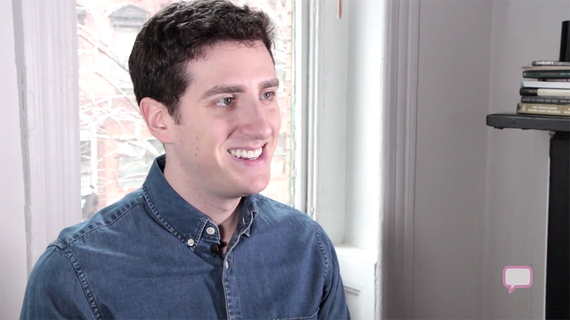 Khalid el Khatib grew up in the conventional town of Dubuque, Iowa, but in an unconventional setting that became a bigger part of his life in high school. He explains:

I was different than everyone else, not because I was gay but because my father was a Palestinian immigrant that came to the United States in his late 20s and married my mother, who was an all-American girl that was born in Wisconsin and grew up in Iowa. My dad didn't start practicing, or did not become incredibly devout, until he was sort of middle-aged. I was in high school, and just before my parents divorced, my father was praying four times a day.

Even after coming out to his closest friends and mom at 19 years old, he still struggled with telling his father. He says:

I went to a therapist just for one session. The circumstances were unique because this therapist was part of my dad's practice, because it was a small town and there were only so many doctors. And he, knowing who my father was, sort of said without saying, "If I were you, I wouldn't come out to your dad. Your dad is a tough guy. He's stubborn." And at that point my father was paying for my school; I was financially dependent on him.

Not knowing how to approach his father was something that still plagued Khalid even after he moved off to New York City and began dating, but he finally decided he had to come out to his father. He recalls:

I decided to fully rip the Band-Aid off, to fly home to Iowa, where my dad was still living, and to come out to him. You tell yourself internally, "I'm going to count to 5, and then I'm going to say it." So I was constantly counting to 4, never quite making it to 5, just saying that "I flew home to tell you--," and a sort of look of panic washed over his face, and I couldn't get it out, and he finished the sentence for me and said, "--that you're gay?"

Even though his dad rolled around on the ground and offered money to Khalid in an attempt to change him, it was the beginning of a renewed relationship that is still growing now. Khalid reflects on the experience:

I think that anyone that sort of expects to come out to a parent, certainly one that has an incredibly complex history and difficult feelings about gayness, expecting that to be wrapped up neatly -- I think that's an unrealistic expectation. To some extent I think that the complexity of it is something that you should cherish. I think that we have his tendency to vilify people that aren't accepting or aren't understanding from the start, and I think the burden that he carries with him is just as heavy if not heavier than the one that I've always carried with me.