If you're a big Spider-Man fan, you're going to love this: A team of researchers at Stanford has developed a way to scale glass walls using pads that attach to a person's hands.

It's kind of like the webbed wonder, but a little less slick than this:

The team is part of Stanford’s Biomimetics and Dexterous Manipulation Laboratory, a research group that previously created vertically climbing robots. The inspiration behind the design was not actually Spider-Man, but the gecko, which is able to climb up a variety of surfaces using what are known as van der Waals forces. 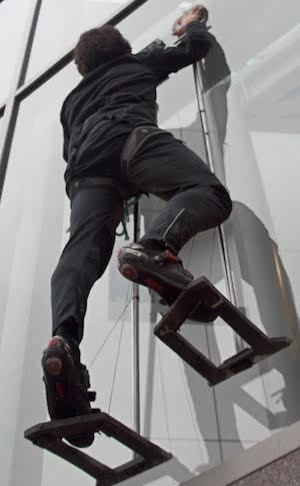 To replicate these electric forces, the Stanford team created hexagon-shaped pads about the size of pingpong paddles. They then covered them in tiny tiles made from polydimethylsiloxane -- a silicon material commonly found in water-repellant coatings. The material itself isn't actually sticky like tape or glue.

Like a gecko's toes, the tiles have tiny nanofibers that make the pads strong enough to cling to glass surfaces. Flexible springs behind the tiles help to distribute the weight. 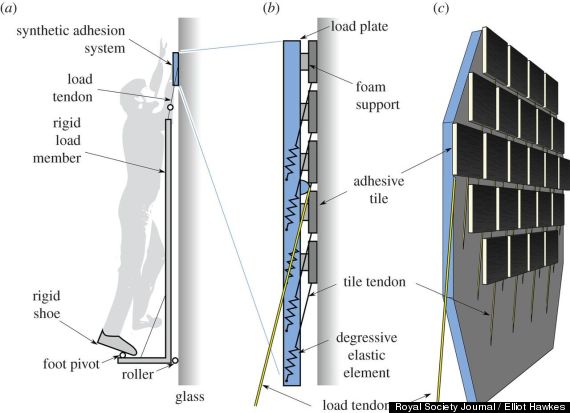 The cable system (left), loaded springs (center) and back of each pad (right) of the system for climbing glass walls.

The pads are attached by cables to solid platforms for each foot, so that as the climber reaches up he also brings his foot. You can see it in action in the video below:

Elliot Hawkes, the engineering graduate student who took the climb, said the sensation felt more like climbing with hooks than sticky tape. The adhesive tiles are able to attach and detach in just seconds. The speed of movement is limited by the climber's posture, not the adhesives, and researchers said they see potential in further optimizing the system.

The Stanford team published its findings this week in the Journal of the Royal Society. This summer, the U.S. Department of Defense showed off a similar climbing technology, but the details of it are confidential.

So will we all be climbing walls soon? Mark Cutkosky, a mechanical engineering professor at Stanford and a member of the research team, told The Huffington Post that’s not the intent, though Hawkes said he has been approached by a rock-climbing entrepreneur who is interested in the project.

For now, the team is more interested in the technology's potential ability to move large pieces of glass without much energy and without leaving residue. It's also collaborating with NASA to create adhesive-equipped robots for capturing space debris.