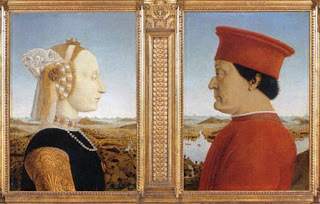 The Duke of Urbino is immortalized in a famous painting by Piero della Francesca where the artist depicts the notch in the bridge of the nobleman's nose. Urbino legendarily made the alteration to his profile so he so as to have peripheral vision after a battlefield accident in which he lost an eye. However, the Duke who attained the title of count when his brother was defenestrated and then promoted by the pope to the soubriquet he would be known for by posterity was a true Renaissance man. If you go to Urbino, you can see his palazzo. Even though the House of Medici was well represented in Florence, Urbino created a palace that was essentially a town within a town, containing stables, saunas, hot and old water, sewage disposal and a number of other elements which enabled him to keep his court close at hand. Many of the amenities of the Ducal palace could be found at the highpoint of Roman civilization, but the ambitiousness of his project which included totally building over indigenous architecture made him a kind of 15th Century Robert Moses. There is a portrait of Urbino by the Spanish artist Pedro Berruguete which depicts him in armor holding a book in his hand; both his portraits exude a ferocity that is anomalous in such an otherwise cultivated man. He was well prepared for war but also held culture in high esteem. His library contained 6% of the books in the civilized world. and his study is one of the wonders of Italian art, creating feats of perspective through the use of meticulously inlaid wood. Despite his impaired sight, Urbino was one of the great visionaries of his time.