I have a 2.5-year-old niece. As anyone who knows me can attest, she is the light of my life. On Friday, posted among videos of her playing ball with my brother and singing in the car with my sister in law was the one that stilled my heart.

She is smiling ear to ear, holding a waffle cone filled with mango sorbet. Per the caption, she'd just said "mommy I want to take my time."

It's adorable. But as a 41-year-old woman who just spent days condemning a presidential candidate for calling a Miss Universe winner "Miss Piggy" I am terrified about the body image environment this little girl and her peers are just years away from encountering. For how much longer will she be able to enjoy a dessert with such pleasure and lack of self-consciousness?

To be fair, in the three years since I created girls' body image and self-esteem campaign for the City of New York (while working for then Mayor Michael Bloomberg), we have seen an important and growing cultural movement. Powerful women - with influence among tastemakers and in the entertainment industry - like Tina Fey, Amy Schumer, Beyoncé and Emma Watson have spoken out on the unrealistic beauty standards imposed upon women. Companies like Dove and Always have increased their female empowerment advertising; Always' Run Like a Girl advertisement was especially smart. The Oscar #AskHerMore red carpet campaign was successful in calling out the sexist focus on women's attire and TV shows like Scandal, How to Get Away with Murder and this season's Pitch have added some much needed (yet still insufficient) diversity to the women we see on television.

Most recently, a young girl even asked Presidential nominee Hillary Clinton if she could help girls understand "that they are so much more than just what they look like," elevating the issue to national discourse at the highest level. (On the positive side, that is.)

But despite these advances, we've seen all too clearly there is more than enough negative, nay toxic, discourse around women. This summer saw the 2016 Olympics, during which athletes at the utmost top of their games competed. Yet not only did the media regularly give outsized credit to the male participants and downplay women's wins, there was conversation about women's bodies and hairstyles.

We also have a possibly unprecedented situation: a presidential candidate who has historically insulted women - intelligence, weight, and attractiveness - and continues to do so with a national media megaphone. Most recently, he made headlines by defending himself against charges of sexual assault by insisting the women weren't attractive enough to assault. It's horrifying on its face but - as Hillary Clinton smartly used in a campaign video before this latest onslaught - even more devastating when we realize that young girls are listening to this.

These are the same girls who we know are already impacted by the day to messages and image they take from the media - what at this point we'd probably call garden-variety negativity. Not deliberately cruel a la Trump, but poisonously insidious nonetheless.

When I was researching the girls campaign for the city, one of the statistics I found most compelling (and challenging) came from a 2010 Girl Scouts and Dove Self Esteem Fund study showing that 63 percent of girls think the body image represented by the fashion industry is unrealistic and 47 percent think it is unhealthy, YET 60 percent say that they compare their bodies to fashion models, 48 percent wish they were as skinny as the models in fashion magazines, and 31 percent of girls admit to starving themselves or refusing to eat as a strategy to lose weight.

In short girls see images, recognize them as unrealistic, unattainable, and often not even real - yet still aspire to meet and then suffer when they can't help but fail to do so.

Which is why it was - and remains - so important to me to not just help girls become more critical consumers of media (although that is certainly important) but to also actively change what the girls are consuming by surrounding them with positive representations of girls who looked like them. The New York City campaign, for example, included 26 girls who ranged in age, race, ethnicity, size, shape and ability.

Considering the current environment, Seventeen Magazine's #perfectlyme Instagram campaign could not come at a better time. Adults and young people posting photos, embracing body confidence and re-defining the social norms of beauty is the most powerful way to collectively counter the unrealistic images confronting young people day to day, as well as the more potent and downright toxic situation we find ourselves in.

I hope some of the photos are of us taking our time with an ice cream cone. 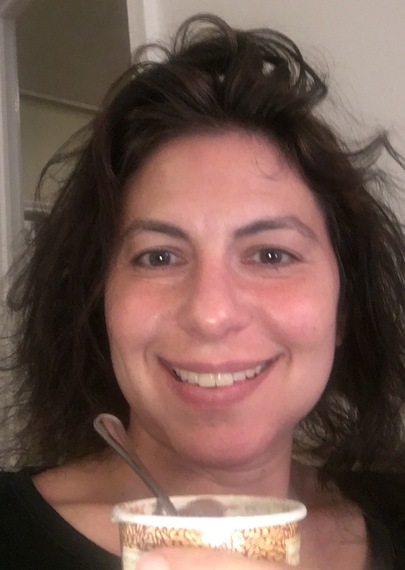