It is easy to get cynical when you watch politics today. Particularly at the federal level, very little seems to get done -- and even when something is accomplished, it feels like the awful byproduct of a process designed to remove all substance and dilute any progress. Whatever happened to the spirit of being bold, showing leadership, building large coalitions, fighting through opposition, and delivering results?

Five years ago today, a committed group of people saw their demand for action culminate in Governor Arnold Schwarznegger's signing of Chelsea's Law -- landmark public safety legislation that puts California at the forefront of states in protecting children from violent sexual predators. An editorial in San Diego's local paper proclaimed the bill's passage as a "remarkable feat." 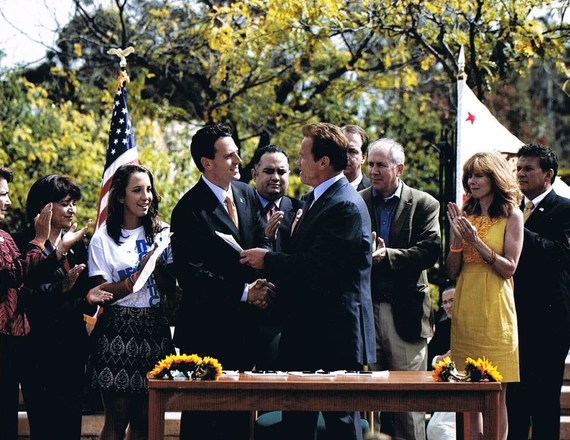 Chelsea King was a brilliant and beautiful high school student whose life was violently taken by convicted sex offender out on parole. The tragedy shined a bright light on very serious gaps in the public safety system. It was clear something needed to be done, but mere outrage at injustice had too many times failed to lead to action. This time, we vowed, would be different.

We had some advantages -- the first of which was an amazing family that was committed not to let the legacy of their daughter be her death. Brent, Kelly, and Tyler King were the heart and soul of our effort and without them nothing would have been possible. As the core messengers, they represented the face of a public policy that would -- and now does -- protect California's nearly 10 million children.

Second, we had tremendous allies throughout California State government. Assembly Speaker John Perez was instrumental in our success. He offered wise counsel, policy suggestions, strategic advice, and public support at the critical moments. Governor Arnold Schwarzenegger pledged his support out of the gate even though some in state agencies had concerns about the size and scope of what we were proposing. And Senator Mark Leno, who chaired the Senate Public Safety Committee, was in a key position to make or break Chelsea's Law. Senator Leno brought wise insight and significant additions that truly made our effort great.

Finally, and perhaps most importantly, the parents of California spoke up in the hundreds of thousands. Our movement saw busloads of parents storm the Capitol, attend rallies, call their legislators, and demand action. It was inspiring to see and a key to our success. They called themselves "change makers" and the name was appropriate. They felt empowered to participate in the political process for an issue that they had a personal stake in -- that empowerment is what drove our movement home.

Our movement had a few guiding principles. One was go big. If we saw something that needed to be reformed, we took the biggest idea available. We didn't look for incremental progress, but instead sought transformative change. This started with the cornerstone of Chelsea's Law -- a true one strike, life without the possibility of parole charge for violent sexual assaults against children.

Second, we were guided by the belief that justice was blind, not dumb. That meant we looked for the most innovative policy and focused our efforts on people we were afraid of and not mad at. Previous ballot measures had been overly broad and in addition to being unjust proved to be unenforceable. So in addition to the one strike charge, we increased penalties where the offense was a violent sexual assault against children.

The results of rigorously adhering to our tactics and principles were decisive. Among the most progressive facets of the bill, we found drug offense penalties where the charges were inconsistent with the pursuit of justice and lowered them. Not only did we help ensure low-level drug offenders could seek treatment, but we paid for any potential increases in jail time for sex offenders by reforming the California criminal justice system. We also added a major section making California the model for treatment with a dynamic containment model, and sharply improved the value of the state's online sex offender database by including risk-assessment ratings. And ultimately, the worst of the worst offenders are kept away from our kids.

By bringing together the right communities, seeking out the best information, and sticking to a set of shared values, Californians proved that our government is not broken or useless. Good things can, in fact, happen -- when it really matters to the players involved. Despite our successes with Chelsea's Law, there is still much left to do.

Today we are asking all who care about efforts like these to join us in signing a petition urging Congress to support The Child Abuse Awareness and Prevention Act. This effort is vital to ensuring the progress we have seen in California is expanded across the country. Together, we can get it done.