In case you've been living in a shoe with umpteen children with whom you didn't know what to do over the past five days or so, you will know that people across the world are up in arms over the Cincinnati Zoo shooting of an endangered gorilla after a toddler fell into its enclosure. It is a 'damn fool shame' as they say in the old south, that this glorious beast was exterminated so quickly. And it was quick. And it was a shame. Let us begin with that.

But only after a child was tossed around like a ragdoll in its enclosure, twice at that, pushed over, head underwater, permanently traumatized. And judging by the very clear video it sure looked to this parental eye like said toddler was about to get throttled and finished off by a gorilla. That boy will never be the same. Seriously, who gives a rat's gnarled ass about what his mother did or did not do? What the zoo did or did not do?

I care about that boy. He was four. Or three. Believe whichever paper you read.

Sue the zoo! Says the mom.
Stupid mom! Say the detractors.
Did what we had to! Says the zoo.

Who to believe? Expert A or B? The lady or the tiger?

As the mother of a four-year-old, all I believe is that this doesn't remotely register in my 'things that are ok' file. I believe the right decision was made at the right time by the zoo. The mom made a dreadful mistake in thinking her child was actually listening to her, and the world lost one of fewer than eight hundred members of an endangered species as a result.

Here's the real problem I have with all of this. The thing that doesn't register and why I have such a rigid and furious opinion about it all. And knowing that I don't bloody write about gorillas you may be ready to hear this. If not, sit down, buckle up and listen.

The outcry includes statistics about said endangered status of these silverback gorillas and how the world is minus one more due to the circumstances surrounding the situation. There could very well be half a million people upset by it all. Maybe more. Upset enough to argue. To 'unfriend'. To be hateful and spiteful and...just 'shouty'. About a gorilla.

Hold that there.
Put it in your cookie jar, your bum bag, your kitchen sink to soak. With the forks and the cake tins and the soggy, greasy old sponges. Soak it up.
Hold it.

Now turn around with me and look outside the Cinci gorilla moat back into the real world.

Come on in. Here is the story you should be shaking your fists about. And shrieking and arguing and unfriending. And if you're not, I am the first one to say shame the hell on you.

If you read me, you know my son Rukai has Down's syndrome. You know he is Rukai first, he is not a diagnosis, he is nothing to fear, to be ashamed of, to challenge, to question, to discard.

He is Rukai. He is a boy. He bleeds red. He feels, he learns, he lives, he loves. He is no cabbage.

Nor am I. Nor are you. In fact he bests me because he tries harder. At everything. And I sit back in awe and in some form of shame.

Yet there exists a new, non-invasive 'supersafe!" pre-natal pregnancy test about to be rolled out in the UK (has been around for zonks elsewhere) which is meant to detect Trisomy 21 (Down syndrome) minus the great big scary (risky!) needle prod to the guts. There are all kinds of shiny happy fluffy names for this test which have to do with harmony, serenity, inner peace, om shanti om-ness, you name it. 'This will make you feel glad you won't have anything other than a perfect child!' kind of juju.

'Fill our coffers with your purchase and we'll prevent your fear!! Terminations R Us!!'

I don't believe in the power society gives to statistics so I won't quote percentages (that's what Google is for) but there are plenty of them dotted about, outlining what this means, those stats and papers and talking heads and all such things which will tell you - by any stretch of the imagination - that this will undoubtedly one day entirely eradicate Down's syndrome.

The NHS - funded in part by my tax money - wants to roll out a global test to eradicate people like my son. This test is already being used as standard in other countries around the world, including my home country the USA.

And you are cheesed off about a gorilla?

My own are an abyss and they are all called Rukai. My views have changed since he came along. Before him, I was ridiculous. I was society.

That is a bold thing to say but I am bold now because I know my son.
I know 800 gorillas is a shame but 0 Rukais is a tragedy.
This I know.

There is a test.
People are investing huge sums of money into this test.
Uninformed women are desperate to have this test because they are being poisoned by fear.
Private clinics and manufacturers are counting pound signs for offering this test.
Doctors are recommending this test.
To kill off people who have the same condition as my son.

Because they supposedly have no value.

And the only people upset about it are the select few who know what a steaming pile of fearmongering feces it is. There are more people upset about the shooting of a gorilla than there are who care that people like my son are poised to be erased from humanity.

That they are not valued as human.
That they are not expected to contribute to society.
That they have such low expectations shackled upon them they are merely boxed into statistics formed back when the "best solution" for people with this condition was institutionalization.

Because they supposedly have no value.

And they are not bloody They. They are Karen Gaffney and Oliver Hellowell and Chris Burke and Madeline Stuart and Sarah Gordy and Pablo Pineda. And how long have you got?

Oh they all have value. What have you achieved today? How high have you reached? Top shelf of the fridge?

Never underestimate the power of the human spirit. That doesn't require a chromosome count, my friends.

For so many, my son's life and contribution to the world is worth less than that of a gorilla. You want to free the gorilla and deny others like my son the very right to exist.

You want to light me up? That there is rocket fuel.

Society has a hell of a lot to answer for. Google the meaning of 'Harambe' and you'll see how utterly ridiculous this all is. 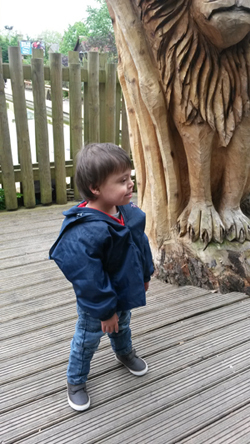 Imagine the doctor looking you square in the eye and insinuating that your firstborn will amount to nothing.

Then see what you do about it.

More:
Parenting NIPTParentsPregnancygenetic testing
Newsletter Sign Up
Raise the kind of person you'd like to know
Subscribe to our parenting newsletter.
Successfully Subscribed!
Realness delivered to your inbox