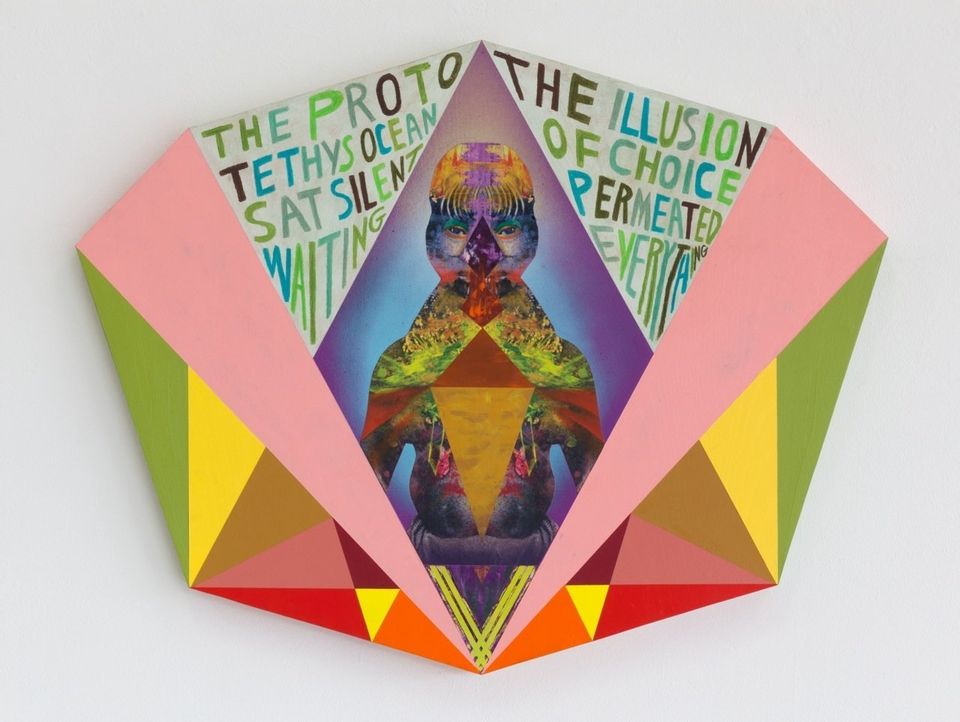 1 / 28
<strong>David Lloyd </strong>questions the nature of information, both its delivery and its reception, in a new body of shaped paintings that builds on and at the same time answers to, even seems to correct, the density and complication of his previous work. These new images have been fabricated on wood panel, shaped to conform to the irregular but symmetrical contours of Lloyds’ images. The images themselves have been compounded, assembled from discrete elements – themselves relatively simple geometric forms – each containing its own wealth of imagery. Some of this imagery is abstract, some recognizable (although its source in photography – especially downloaded imagery – is more evident in certain segments than in others), and some is purely verbal, written in multicolor and resembling, at least at first glance, the rambling screeds held up by (apparently schizophrenic) homeless people. The surfeit of references in Lloyd’s kaleidoscopic, almost heraldic compositions poses a dichotomy: does one pick through the vast array of material in order to be informed (as if the artwork were some sort of newspaper) and perhaps even derive a larger, unifying comprehension (as if it were some sort of narrative)? Or does one stand back from the clangor and allow formal relationships between the disparate elements to emerge? Lloyd’s formula sets us up to expect that doing the latter will lead to the former. In fact, that’s not at all a certainty; the avalanche of clues and cues may ultimately be sortable, but it may not be coherent. Certainly it does not conform to any standard mode of discourse. Lloyd’s paintings are meta-journals of some kind, accepting the multilevel babble of on-line information and making visual rather than eidetic sense out of it. The medium is the message – again. (Gallery KM [now Klowden Mann], 6023 Washington Blvd., Culver City CA; closed. <a href="http://www.klowdenmann.com" target="_blank">www.klowdenmann.com</a>) – Peter Frank DAVID LLOYD, Waiting, 2013, Mixed media on wood, 28 x 36½ x 2 inc