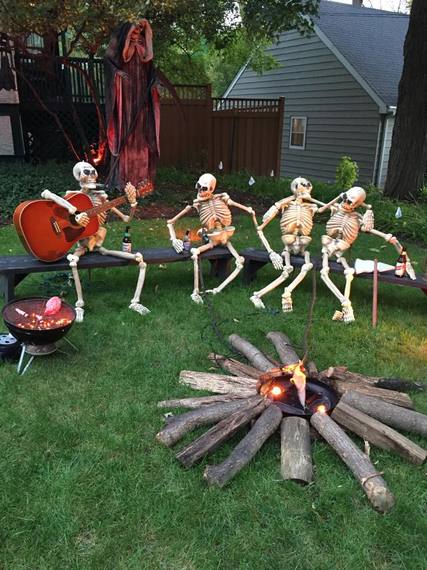 I'm going to sit here in my rocking chair on my front porch and take a break from churning butter and cross-stitching to tell my children all about Halloween back when I was a kid -- or as they call it, The Olden Days.

"When I was your age... nobody ordered their Halloween costumes online! We didn't even have an online to order from! So we made 'em! Out of stuff we found in our houses! Or our backyards!" And then I'd mumble something about "kids today," and start rocking angrily while shaking my fist at the sky.

When I was a kid, Halloween was a super fun day... and that was about it. It wasn't this huge, Christmas-like frenzy that involved ordering costumes online in September, decorating both the inside and outside your home, and party after party leading up to the actual day.

When I was a kid, I would pick out my Halloween costume the morning of Halloween. I wore the same costume for several years in a row, until I grew out of it or it split at the seams, I can't remember which came first. It was a hand-me-down, like almost everything else I got as the youngest of eight children. It was a sack, literally, that my Mom had sewn and then drew on with a sharpie marker, copying the label from the bag of flour.

And then I'd have to explain to you that, yes, that's actually me in those pictures. And yes, I know I looked like a boy. A boy dressed as a Sack of Flour, no less. Not one of my finer moments, admittedly. But a word in my defense about that weird haircut: those Dorothy Hamill haircuts were brutal for everyone, except Dorothy Hamill herself. It was because of that damn haircut that I looked like a boy until I was about eleven years old.

You also may notice that the little Sack of Flour Boy bears no resemblance to the leopard-print-everything, cleavage-loving, big-haired redhead standing before you in high heels. This, my friends, is the perfect example of over-compensation: when you grow up looking like a scruffy boy with a weird haircut, you spend your entire adulthood proving you're a woman. So thank you, I guess, to my Sack of Flour Halloween Costume: you inadvertently created my adult persona!

Another good (but very un-P.C.) costume that I remember wearing -- also for a couple of years in a row -- was my homemade Hobo costume. A stick from the back yard with a red bandana tied around the end of it and actual dirt rubbed onto my cheeks: all ready for Halloween in fifteen minutes flat! And one year, I carried my own violin case, wore my big brother's Confirmation suit, my Mom drew a scar on my cheek and boom: I was Al Capone. Perfect for a Chicago girl!

My kids use cute, plastic pumpkins that we store in a bin year-round so they can bring them out on the Big Day. When I was a kid, I grabbed the pillowcase off my bed and ran feral through the neighborhood, leaving a trail of flour behind me everywhere I went. Everyone used pillowcases! Other kids have personalized, embroidered Trick-or-Treat bags from Pottery Barn that I see all over my neighborhood.

My neighborhood rocks at Halloween. We moved into our home here ten years ago this month. I was pregnant with our second and our oldest was two-years-old at the time. All we knew of modern-day Halloween was from the city, where we took our firstborn trick-or-treating by riding up and down the elevator in our small building, with our neighbors waiting with goodies since he was the only child amongst all these empty-nesters. It was awesome, like how I imagine Trick-or-Treating would be if you were the Prince of a small but wealthy nation.

The biggest indication that Halloween was very different here in Mayberry was when my husband walked in from work and told me that the train -- his usual one -- was almost completely empty. Where could everyone have gone, we wondered. I was only able to come up with dark, apocalyptic reasons for no one being on the train: "Did you see any zombies? Think carefully." But he was convinced it was a fluke.

It turned out that most of the parents in our new town either work a half-day or stay home completely on Halloween. We marveled at the thought of either of our Dads taking off work for Halloween when we were little. I have no memory of either of my parents' Trick-or-Treating with me -- we were on our own for Trick-or-Treating, running in large gangs of siblings and friends, heading home only when our pillowcases got too full of stale milk duds.

When we took our son to Trick-or-Treat that year in our new town, we were meeting many of our neighbors for the first time since we had just moved in a couple of weeks before. We couldn't believe how friendly everyone was, inviting us to the big neighborhood Halloween party and also, handing out adult treats to us when we trick-or-treated at their homes.

That's right, a lot of the houses had bowls of candy for the kids... and kegs of beer or other haunted spirits along with red solo cups, for the parents. The greatest Halloween House I've ever seen in my whole life is right here in our Mayberry neighborhood. These neighbors spend weeks decorating their huge yard and it's filled with skeletons, a huge graveyard, a cannibal cookout around a campfire, giant spiders and zombies as far as the eye can see. My kids talk about it all year long and on October 1, they start walking over to watch our neighbors' begin to put it all up. It takes them a couple of weeks to finish, and we get a constant report of their progress at dinner: "The skeleton is up on the roof and the tombstones are up, but the moaning lady isn't in the tree yet," is how a typical report goes.

I remember one neighborhood Halloween party I went to when I was little, in someone's backyard. We all went bobbing for apples -- good old-fashioned fun! I remember getting my face and hair wet in the metal tub and not caring at all, gulping mouthfuls of water trying to get my apple. And then I also remember getting all achy, burning hot, my stomach lurching as I ran home just as fast as I could. I had a high fever, probably because the apple water I was gulping was filthy from every kid in the neighborhood dunking their snotty, virus-filled face into the tub.

That would never happen today, can you even imagine? No parent in their right mind would let their child dip a pinky, let alone their whole damn face, in a barrel full of murky (unfiltered, non-artisan) water and bobbing for (non-organic) apples that had been marinating all day in a germy, E Coli and Influenza-A stew.

So instead of bobbing for MRSA apples, we go with our children to our decked-out neighbors' house, where everyone gathers for a post-Trick-or-Treat party every year. They have their teenage kids and their friends 'work' the party by scaring the younger kids -- jumping out from behind tombstones or trees. This can go on for hours into the night, to the absolute delight of our kiddos.

And the candy they get! Growing up, you got bite-size minis, or a hard piece of bubble gum. My kids now know which houses to hit where they give out full-on King Size bars. They store this info away for 364 days and then pull it out on Halloween, like birds remembering their migratory pattern at the change of seasons. The former Principal at our kids' school would also give out full size bars and basically the entire school would trek to her house to get them. The kids try and visit as many teachers as they can, because they always give out the best treats to their students.

This year is the first year that we may not all be trick-or-treating together as a family; our seventh grader wants to go off with all his friends. He and his friends have been texting about their plans for this night since mid-September. They don't want us walking behind them, like we always did, the adults hanging back at a respectable distance: even that's too close now. I don't like that, but aside from putting on a full gorilla costume and sneaking out to follow him, I think we have to let him go out on his own.

Last year, he wouldn't use a plastic pumpkin to hold his candy in, either. He said it was only for little kids, but he didn't know what to use instead. I told him I had just the thing for him and gave him a pillowcase. He loved it.

More:
homemade-halloween-costumesHalloween trick or treatParentsDorothy Hamill
Newsletter Sign Up
Raise the kind of person you'd like to know
Subscribe to our parenting newsletter.
Successfully Subscribed!
Realness delivered to your inbox