As a member of the Board of Directors for The Cougar Fund, and also because I've studied various predators for decades, I'm always amazed at how some people casually write off these amazing nonhuman animals (animals) as being "dangerous" and "violent" pests who should be killed -- in some cases intentionally tortured -- whenever it's possible to do so. Indeed, this is the mission of Wildlife Services, a government organization that is responsible for horrifically killing tens of thousands of animals yearly, including predators, in the name of coexistence, and also under close scrutiny for their killing ways (see also the award-winning film called EXPOSED - USDA's Secret War on Wildlife). I've also had what I call three "close encounters of a lion kind," and while I prefer not having any more of these up and close personal meetings with these remarkable beings, I also would never want any other animal to be killed because I happened to trespass into their home. 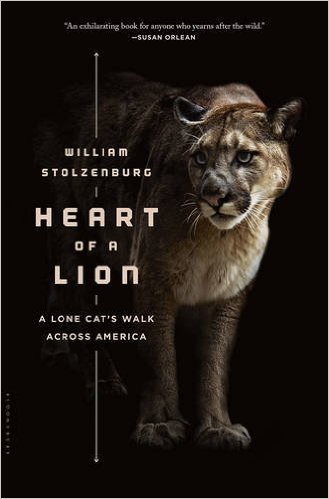 So-called dangerous predators deserve much better treatment and respect, and I'm thrilled to see the publication of noted author William Stolzenburg's new book called Heart of a Lion: A Lone Cat's Walk Across America. The book's description lays out what this outstanding book is all about, and below is an interview I was able to do with Mr. Stolzenburg.

Late one June night in 2011, a large animal collided with an SUV cruising down a Connecticut parkway. The creature appeared as something out of New England's forgotten past. Beside the road lay a 140-pound mountain lion.

Speculations ran wild, the wildest of which figured him a ghostly survivor from a bygone century when lions last roamed the eastern United States. But a more fantastic scenario of facts soon unfolded. The lion was three years old, with a DNA trail embarking from the Black Hills of South Dakota on a cross-country odyssey eventually passing within thirty miles of New York City. It was the farthest landbound trek ever recorded for a wild animal in America, by a barely weaned teenager venturing solo through hostile terrain.

William Stolzenburg retraces his two-year journey--from his embattled birthplace in the Black Hills, across the Great Plains and the Mississippi River, through Midwest metropolises and remote northern forests, to his tragic finale upon Connecticut's Gold Coast. Along the way, the lion traverses lands with people gunning for his kind, as well as those championing his cause.

Heart of a Lion is a story of one heroic creature pitting instinct against towering odds, coming home to a society deeply divided over his return. It is a testament to the resilience of nature, and a test of humanity's willingness to live again beside the ultimate symbol of wildness.

My interview about Heart of a Lion and this amazing and courageous individual went as follows:

Why did you write Heart of a Lion?

To honor this heroic creature, who crossed an impossibly huge and dangerous swath of North America looking for a mate. When I first became aware back in June, 2011, that a mountain lion had been killed in Connecticut, I assumed like many others that it had to be somebody's escaped pet. The nearest breeding population resides in southern Florida. When I later learned the truth--that he had set out as a barely weaned teenager from the Black Hills of South Dakota, spending nearly two years on the road before passing within twenty air miles from Manhattan--I at first didn't process the enormity of it. Maybe it was just too much to imagine. It took a while, but I finally realized my duty to see that his legacy was not left to some ridiculously inadequate headline reading, 'Big Cat Walks Long Distance, Dies on Connecticut Parkway.'

What would you like people to learn from your newest book?

Know that what this lion accomplished amounts to far more than simply walking a long way. He swam great rivers, he crossed some of the busiest superhighways in America. He fed himself on the fly in a foreign land. And all the while he was threading his way through a culture that hadn't tolerated his kind for a century or more. That he survived as far as he did is no small miracle. But what he revealed about ourselves along the way, is every bit as big a story. Here is a creature whose fellow lions we are shooting by the thousands every year, so often on the presumption that it's either us or them. This lion walked past hundreds of pastures, barnyards, and corrals offering easy meat, and so far as we know he ignored all the invitations. He passed through cities and towns, walking among thousands of us who never had a clue, and he never so much as cast a threatening glance. He was the perfect contradiction to our zero-tolerance culture. He was the antithesis to the beast of all blame. He didn't come looking for trouble; he came looking for two honorable things that should evoke empathy in all of us: A hospitable place to live, and a mate.

How does it follow up on your previous books about human-wildlife encounters?

It's the third in my unplanned trilogy of predator sagas. I've been focusing on predators and people for the last ten years: Where the Wild Things Were was a tale of discovery documenting the chain of ecological wreckage we've engineered by driving our greatest predators from all but the farthest reaches of the globe; Rat Island was the Wild Things' twisted sequel, visiting other wreckages where we've shipped predators to places they were never meant to be. Heart of a Lion is my most intimate look yet at the walls of misunderstanding we've built between us and the big fanged beasts, and how some of those walls are starting to come down. There's still a world of hardened prejudice and hateful maltreatment of our big cats, but there's also a place where it seems a brightening philosophy of tolerance is taking root.

First off, I'm hitting the road to continue sharing the lion's story with anybody who will listen. But I've also started digging on a new story exploring the psychology of cruelty and compassion. It is inspired by a relatively new member of the family, a burned and abandoned puppy whom I literally ran across a few years ago. He and others like him have since opened my eyes to the bewildering human capacity for brutality against some of our most affectionate and forgiving companions. But he has also introduced me to some of this planet's noblest champions of kindness. I just hope, if not for the sake of humanity then for my own sanity, that the good guys win this one.

Killing lions and other animals is bad biology, makes for ecological wreckage, and is ethically indefensible

As Mr. Stolzenburg puts it, this remarkable and awe-inspiring wandering lion was "looking for two honorable things that should evoke empathy in all of us: A hospitable place to live, and a mate." Furthermore, his books document "the chain of ecological wreckage we've engineered by driving our greatest predators from all but the farthest reaches of the globe." I hope that Heart of a Lion enjoys a broad international audience because killing the fascinating animals with whom we share our magnificent planet is an ill-conceived plan that doesn't honor who they are and how important they are to maintain the integrity of diverse ecosystems. It will help humans to "rewild" and to become reconnected and re-enchanted with other animals and their homes. Peaceful coexistence with the other animals will benefit us and them. It's a win-win for all. Not only is wantonly and brutally killing so-call "dangerous" animals bad for the planet and the individuals themselves, it also is bad biology and ethically indefensible.