Chicken John (aka John Rinaldi) would like to send an oceangoing boat built of trash down the Ohio River this August. The question is: Will you support him on this foolhardy mission?

The project has only a few more days left on Kickstarter, and the brave crew needs major monetary help for transportation, insurance and all the not-so magical parts of building a boat for forty people. They are set to sail, and will perform "Bigfoot: The Musical" for free along the way. The pledge rewards alone are also worth supporting. For $25 you get "Thing we found on the ground, over there." $100 gets you a 15-minute junkyard shopping spree, and $350 gets you $700 worth of novelty vomit. (More on that later.)

The boat, named The Inconvienance— yes, spelled just like that — is made of old books, a piano and a two-story Ferris wheel. The enchanted shanty looks more like the mythical boat from Howl's Moving Castle than anything I've ever seen in real life. What started seven years ago as a collaboration with street artist Swoon has become an ongoing summer adventure enough to make anyone with a nine to five incredibly envious. I asked Chicken John a few questions about the project, and his answers are below. The San Francisco legend used to be a guitarist for GG Allin's band, The Murder Junkies. John was also a key player in the beginning of Burning Man, as well as a San Francisco mayoral candidate. He had just returned from Camp Tipsy, an entirely other adventure from, you know, the whole giant trash boat thing. Scroll down for images.

HP: What exactly is Camp Tipsy?

CJ: It is a boat building contest and campout. There is a contest with judges and whoever builds the worst boat wins. i did bring my junk boat to Camp Tipsy but i didn't include it because it wouldn't win. We build real boats. Camp Tipsy is like temporary boats, like a door ducktaped to an intertube... Boom! It's a boat.

HP: Do the boats have to work?

CJ: There is a category for boats that just sink. But the boats we build to go down the rivers, we call them forever boats. We have to build them 40 times the tolerance of what we normally need. Winds, currents, there is no fucking around. They need to be as good or better as boats they have in the store.

HP: Is it built yet?

CJ: It is built. It is awesome. It is the best boat we have ever built; it is also the fastest boat. When we first started we were building boats that were about three miles an hour. Now we know some more about nautical engineering and this boat is going at about seven naughts. It's about twice as fast as you walk.

HP: So, if you don't make all the money on Kickstarter what are you going to do with the boat?

CJ: That's a good question. You know, I certainly don't have anywhere to put it. And I can't do the project without the money; it's impossible. So I don't know. I like to think of these projects as a motorcycle doing a pop-a-wheelie. The wheelie can't end... wheelie all the way. It's wheelies all the way or total wipeout.

HP: Is Swoon involved in the project?

CJ: Not as much as the other projects. She is in Haiti right now building houses. Which is what she does when she is on vacation... some people play golf. Last I heard she said she was enthusiastic to come out for at least a week. Not for design, in the past she has designed the boats. It was a great relationship we have between "creative" and "creating." But she wants to come and be on the crew. She is a great morale-booster, she is a bundle of positive energy. She brightens up the room.

HP: I'd like to hear about "Bigfoot: The Musical." Can I get a quote or teaser?

CJ: "Bigfoot: The Musical"... the president of the logging company, his daughter falls in love with a Sasquatch. Then it comes out that his wife left him for a Sasquatch which is why he became a logger, for revenge. The costumes are great, the Bigfoot costume. I don't think it's going to win a Tony but, you know. Imagine you are someone in West Virginia and here comes this boat, made of bullshit, with a 20 foot high pedal-powered Ferris wheel on it. And they are like "come to this free show later." And you go and there are a bunch of idiots performing this great musical. It is pretty much the most unlikely thing. This will be our seventh trip and I can't imagine a summer that we wouldn't do this, it's just so much fun. You have an idea on a napkin and a couple months later you're standing on it, and you're going on a river to destinations unknown.

HP: Why is novelty vomit so expensive?

CJ: Let me tell you, novelty vomit is not easy to buy in large quantities. I did a little publicity stunt when I was annoyed that the city of San Francisco was allowing private businesses to rent space in public parks. So I told them that me and my friends were going to go to the park on a certain day and stick our finger down our throats and fill the entire park with vomit and wash the trailers away in a river of puke. Everybody was very nervous. And we ended up giving the kids in the park this novelty puke but there was so much puke and not very many kids. So we have like half a wine barrel of novelty vomit.

If you donate $350 bucks you get $700 of vomit, so you're getting it at half price. And since I bought so much of the vomit at once I actually cornered the market on novelty vomit and caused a price increase. It's one of my great contributions to humanity.

HP: What is the difference between an artist and a showman?

CJ: We define 'art' simply as anything that is pointless and intentional. We define a showman as someone who lives their lives as art -- when you can take the mundane and turn it into the magical.

Check out their Kickstarter and let us know your thoughts in the comments section below.

Here's a slideshow of the fun to come: 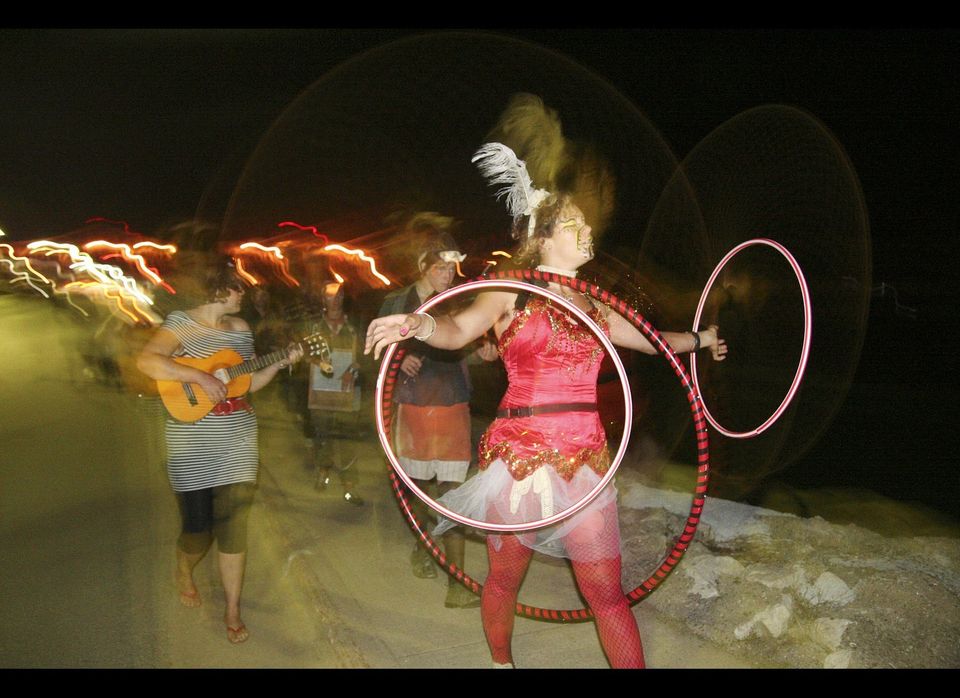