It's no secret that women are underrepresented in Hollywood. From "The Wolf Of Wall Street" to "Star Trek Into Darkness," many films lack developed female characters -- or any real female characters, developed or not. But according to a new report by Vocativ, featuring complex ladies in films is actually good for the bottom line.

Vocativ writers Versha Sharma and Hanna Sender analyzed the 50 top-grossing feature films of 2013 using the Bechdel Test. Named after American cartoonist Alison Bechdel, the test evaluates gender bias in films by whether a movie features two or more women who have a conversation about something other than a man. (Seems simple, but many, many films don't pass.)

Out of the 50 movies, 24 passed the Bechdel Test. Seven of the 24 were deemed "dubious" because the majority of the dialogue between the female characters was about men. The films that passed made a combined $1.56 billion more in box office sales than those that didn't. Those numbers speak for themselves. 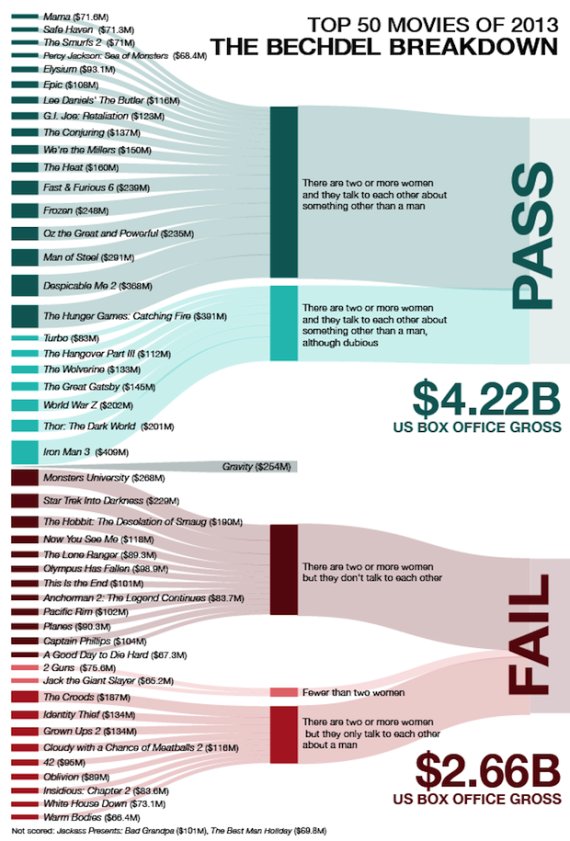 However, Sharma and Sender noted that out of the 50 films, only one was directed by a woman -- "Frozen," which was co-directed by Jennifer Lee. This statistic is just more evidence of the gender disparity found both in front of and behind the cameras.

It seems pretty clear that films that feature women as more than props for male characters sell just as well -- if not far better -- than those that don't. It's about time Hollywood got the message and acted accordingly.