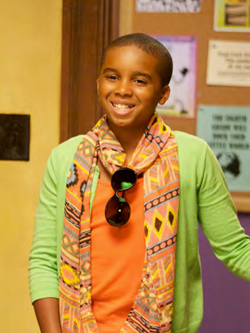 When I set out to write a son for Marty Kaan, Don Cheadle's ethically challenged character on House of Lies, I thought, "What kind of kid would just undo this guy? What kind of kid would unbalance and upend Marty? What kind of kid would take him out of his role as smug superman who can solve any "case" using a variety of consulting tricks and genuine analytical genius?" And I came up with Roscoe, based loosely on several children I've met over the years whose gender identities have come differently from those of the majority of their peers. He's a kid who'd rather play Sandy than Danny Zucko in Grease -- for now. And in creating a challenge for Marty, I've also encountered a barometer for the varying attitudes and preconceptions of the audience. An entire segment of the audience simply dismisses Roscoe as gay. Another immediately jumps to pushing him into a transgender role. Some just think he's weird. How about this: he's just Roscoe.

In Diane Ehrensaft's thoughtful HuffPost piece "Look at Him, He's Sandra Dee: What House of Lies' Roscoe Can Teach Us About Gender-Nonconforming Children," she makes what is perhaps the most important distinction between sexuality and gender identity: "gender is who we go to bed as, whereas sexuality is who we go to bed with."

As our own children are bombarded with increasingly sexualized images and iconography from an ever-younger age, the pressure to self-define begins earlier and earlier. The children on whom Roscoe is loosely based began their exploration of their own gender identities in preschool and kindergarten. And as an outside observer of the phenomenon, it looked as natural as any piece of play in any classroom environment. And for these children, it was as natural as the way in which our unconscious informs our dream life informs our waking life, as natural as picking up some clothing from the dress-up box in the classroom and trying it on. It's when our own adult, sexualized, fixated perspective is imposed on our young charges that things get wonky. So while these kids were making this very honest survey of their own gender, their very identities, the witch hunt in the classroom began. A committee of "concerned" parents was formed. Threats were made to pull children out of the expensive private schools. Lines were drawn, political, social and sexual prejudices dutifully trotted out. Terrible, terrible things were said: the adult projection onto the children, the objectification of the Other, was underway.

As Thornton Wilder says so succinctly in the final moments of Our Town, "Wherever you come near the human race, there's layers and layers of nonsense." I would amend this slightly to limit it to the adult human race and exclude the pure and untarnished world of a child's honest exploration and inquiry.

We are tasked with the guardianship of our kids as they strive to define themselves in a fast-moving, complicated time. Isn't it up to us to hold the tension and discomfort, to whatever degree it exists in each of us, as our children do their own very difficult jobs of seeking a self, an identity -- even if it's different from the one on their birth certificate?

As for Roscoe, his job in Season 2 will be much the same as in Season 1, and much the same job as all our kids ask of us: to challenge his dad to dig deep and give him the best of himself, even if it kills him.

Playwright, director, and novelist; creator, executive producer, and writer of 'House of Lies'