One day, while my daughter was happily distracted with her own marker drawings, I decided to risk pulling out a new sketchbook I had special-ordered. It had dark paper, and was perfect for adding highlights. I had only drawn a little in it, and was anxious to try it again, but knowing my daughter's love of art supplies, I knew if I wasn't sly enough, I might have to share. (Note: I'm all about kid's crafts, but when it comes to my own art projects, I don't like to share.) Since she was engrossed in her own project, I thought I might be able to pull it off. 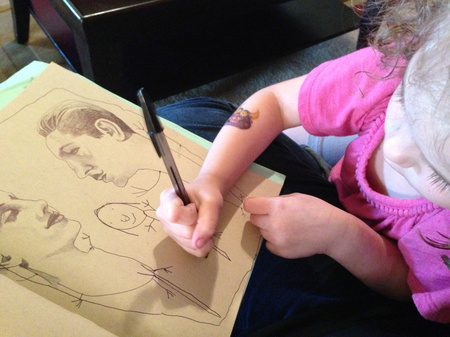 I should have known better. Not long after I had drawn my first face (I love drawing from old black-and-white movie stills), she swooped over to me with an intense look.

"OOOH! Is that a NEW sketchbook? Can I draw in that too, mama?"

I have to admit, the girl knows good art supplies when she sees them. I muttered something about how it was my special book, how she had her own supplies and blah blah blah, but the appeal of new art supplies was too much for her to resist. In a very serious tone, she looked at me and said, "If you can't share, we might have to take it away."

Oh no she didn't! Girlfriend was using my own mommy-words on me! Impressed, I agreed to comply. "I was going to draw a body on this lady's face," I said.

"Well, I will do it," she said, and grabbed the pen. I had resigned myself to let that one go, to let her have the page, and then drop the matter. I would just draw on my own later, I decided. I love my daughter's artwork, truly, I do! But this was MY sketchbook, my inner kid complained. 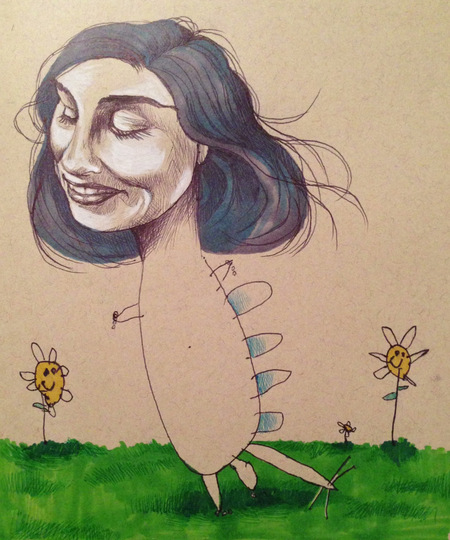 Not surprisingly, I LOVED what she drew. I had drawn a woman's face, and she had turned her into a dinosaur-woman. It was beautiful, it was carefree, and as much as I don't like to share, I LOVED what she had created. Flipping through my sketchbook, I found another doodle of a face I had not yet finished. She drew a body on it, too, and I was enthralled. It was such a beautiful combination of my style and hers. And she LOVED being a part of it. She never hesitated in her intent. She wasn't tentative. She was insistent and confident that she would of course improve any illustration I might have done... and the thing is, she DID.

Soon, she began flipping through my sketchbook, looking for more heads.

"Do you have any heads for me today?" she would ask me each morning. So, I began making a point at night to draw some faces for her (which was my pleasure -- faces are my favorite part, anyway). She would then pick up a pen with great focus and begin to draw. Later, I would add color and highlights, texture and painting, to make a complete piece. Sometimes, she filled in the solid areas with colored markers, but I would always finish with acrylics later on my own. 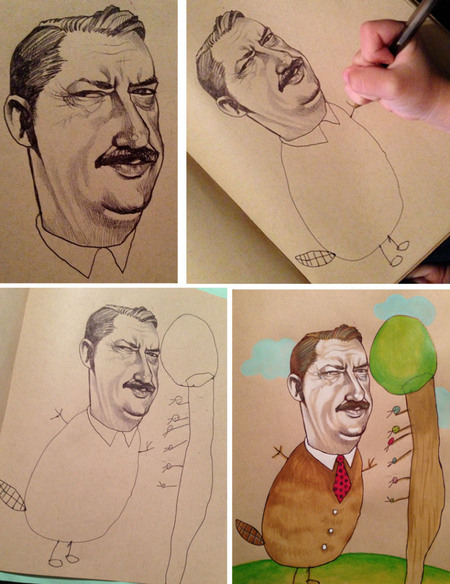 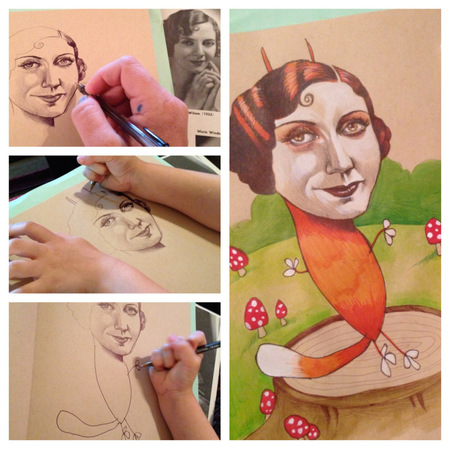 Sometimes, I would give her suggestions like, "maybe she could have a dragon body!" but usually, she would ignore theses suggestions if it didn't fit in with what she already had in mind. But since I am a grown-up and a little bit (OK, a lot) of a perfectionist, I sometimes would have a specific idea in mind as I doodled my heads. Maybe she could make this into a bug! I'd think happily to myself as I sketched, imagining the possibilities of what it could look like. So later, when she'd doodle some crazy shape that seemed to go in some surrealistic direction, or put a large circle around the creature and filled the WHOLE THING in with marker, part of my brain would think, What is she DOING?!? She's just scribbling it all up! But I should know that in most instances, kids' imaginations way outweigh a grown-up's, and it always ALWAYS looked better that what I had imagined. ALWAYS. 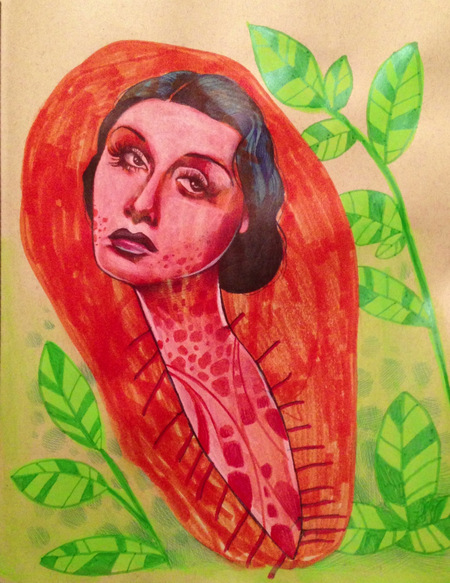 For example, the filled-in marker of the one above, she told me, was a chrysalis, for the caterpillar to transform into a butterfly. Of COURSE it is. I never would have thought of that. And that's why kids make awesome artists. 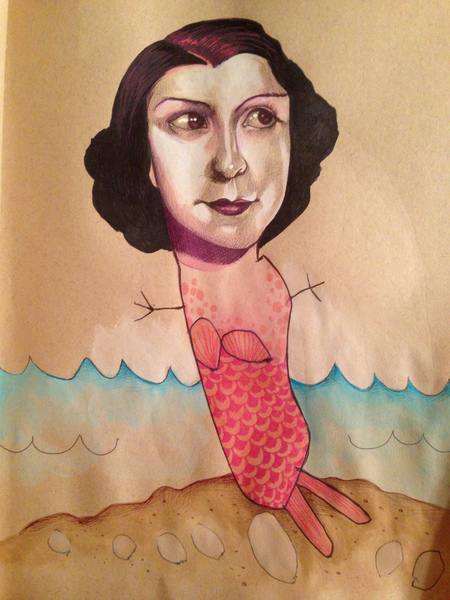 Later, I would show her what I had done with our drawings -- the painting and coloring. She seemed to critique them pretty harshly. "That's silly, mama," or, "you put WATER behind her?" But for the most part, she enjoyed them. I enjoyed them. I LOVE them. 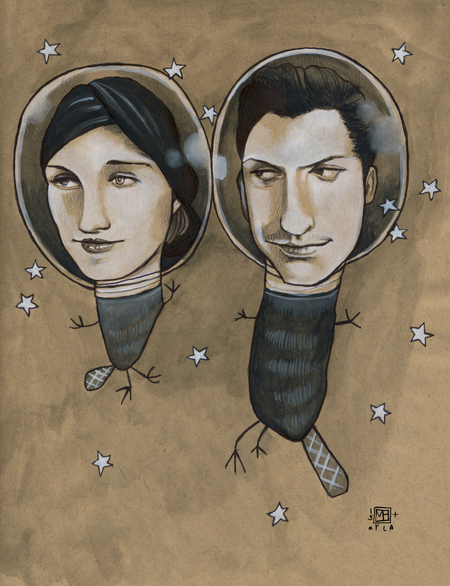 And from it all, here are the lessons I learned: 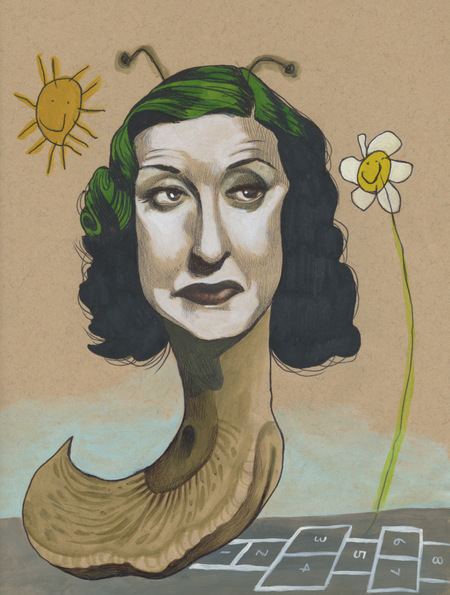 To see more collaborations between Mica Angela Hendricks and her daughter, click through the slideshow below, and visit Society 6 where they are available for purchase.

Collaborating With A 4-Year-Old
More:
Parentspreschoolersparents-moms
Newsletter Sign Up
Raise the kind of person you'd like to know
Subscribe to our parenting newsletter.
Successfully Subscribed!
Realness delivered to your inbox