With Festivus coming up next month, I'm starting my list of grievances. The woman who touched my baby's face at the grocery store. What a giver -- she shared her germs without asking for anything in return. And the guy who parked in a space reserved for expecting mothers. Dude, a beer belly does not entitle you to claim that you're pregnant.

My favorite business author, Dan Pink, is on a mission to fix these kinds of problems. He's the host of a new show on National Geographic called Crowd Control, which uses social science to change some of the most irritating behaviors that we see in everyday life. After writing bestsellers like Drive and To Sell Is Human, giving a wildly popular TED talk, and serving as a chief speechwriter in the White House, Dan is uniquely qualified to make our days a bit less miserable.

In the first episode, he takes on speeding drivers, jaywalking pedestrians, and people who go one ugly step beyond stealing spots reserved for pregnant women: they park their cars in disabled spaces. Here's a sneak preview of three lessons learned:

1. Fear isn't always the best strategy. To scare jaywalkers, he puts a sign on the ground: "Be late. Not dead." Some pedestrians stop in their tracks, but others ignore the warning: they don't believe they're in danger.

Instead of highlighting the risks of walking early, Dan finds a clever way to increase the benefits of waiting. He builds a game of virtual tug-of-war, where pedestrians compete against the people waiting to cross from the other side of the street. The number of jaywalkers per hour drops by 90 percent. Some citizens get so absorbed in the game that they forget to cross the street for multiple lights. And there's a side benefit of the friendly competition: strangers who would normally walk right past each other now have an excuse to interact.

2. Offenders need to see their victims. A suave guy parks his sports car in a disabled spot. Dan's team pulls up with a truck, blocking him in to watch disabled people roll out in wheelchairs. It's enough to embarrass the guy -- he even starts helping to push wheelchairs -- but it's not scalable. To fuel empathy by bringing more drivers face-to-face with their victims, Dan designs a new sign for handicapped spaces: 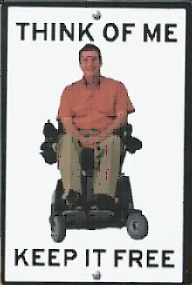 All of a sudden, people start doing the right thing. After a full month of surveillance, not a single violator parked in a space with one of these signs.

3. Don't underestimate the power of intermittent rewards. Dan's team is able to cut speeding by a third without ever issuing a ticket. How?

He posts a sign announcing that drivers who obey the speed limit will be entered in a lottery to win $100.

After filming 12 episodes, Dan has tackled a wide range of issues -- getting Jersey Shore vacationers to use sunscreen, motivating New Orleans residents to clean up Bourbon Street, creating a talking elevator that shames people into taking the stairs, making sure people don't double-dip a chip, and even adding a bit of entertainment to the wait at the Department of Motor Vehicles. To find out what else we can expect to learn, I asked Dan a few questions:

1. What was your biggest surprise?

Dan: When we were shooting the show, I spent a lot of time watching people in the wild, folks just gliding through their regular lives -- on the street, in the office, in a shopping mall, wherever. What amazed me was just how much of the time we operate unconsciously -- guided by default behaviors and largely oblivious to what's happening around us. I'd previously read the research on inattentional blindness, but to see it in action day in and day out was a stunner. It presented a real challenge in changing behavior -- which is why we often used novelty, surprise, and sometimes even shock.

2. How do you recommend handling repeat offenders?

Dan: You know, that's a tough one. I wonder if some form of social pressure would work. Perhaps we could get a few confederates to approach jaywalkers and say, "Hey, you know you just jaywalked. That could be dangerous." That might be worth trying in season 2 -- though we should probably roll it out in the Midwest rather than, say, the Bronx.

3. Which takeaway have you applied most often in your life outside the show?

Dan: Explaining why. In one episode, we rewrote in-flight safety announcements so they explained, in vivid terms, why passengers needed to, say, put up their tray tables. That had a big effect (when we simulated an air crash and evacuated passengers.) Again, I'd read the evidence in the academic literature -- but there's something powerful seeing in real life. Now if I want someone -- whether it's my kids or a work colleague -- to do something, I'm much more likely to explain why rather than just sternly command or gently suggest.

Why You Should Watch It

The show is really entertaining, can deepen your understanding of behavior, and will arm you with some techniques you can use in your lives. Plus, there's the sweet satisfaction of seeing a few nasty people get a taste of their own medicine.

________________
Adam is a Wharton professor of management and psychology, and the New York Times bestselling author of Give and Take: Why Helping Others Drives Our Success. Sign up for his free newsletter at www.giveandtake.com