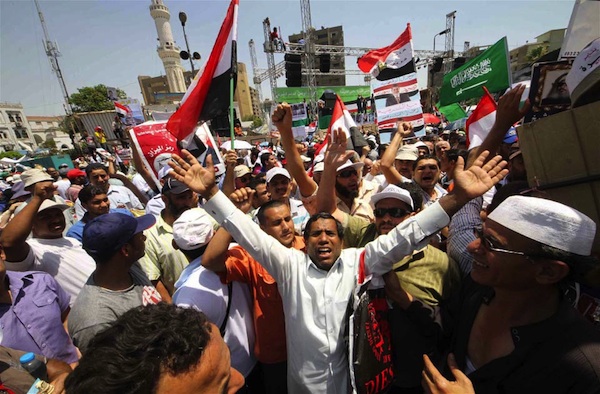 These have become the code words at UN, EU and Washington to shadow support for either deposed President Morsi of the Muslim Brotherhood or the new military-backed "national unity" government. While there was broad consensus that the Egyptian security forces had overstepped in their recent crackdown and the killings of hundreds of protesters, there has been less agreement on who has the capacity as well as legitimacy to govern Egypt.

Egypt as Field of Ambitions:

President Obama left little doubt that he implicitly favors "inclusive," thus the effective coup, over the "democratically elected" Morsi presidency. On the other side, from PM Erdogan of Turkey to U.S. Senator John McCain, the key code word has been "democracy" or "democratically elected." Saudi Arabia has painted pro-Morsi protesters as "terrorists" while along with Erdogan, other Gulf rulers, such as Qatar, have been more sympathetic of the Muslim Brotherhood. The current violence, efforts to quash the pro-Morsi sit-ins and reported attempts to incite religious conflict with the Coptic Christians not only result in intolerable loss of life and impose further economic hardship but also provide ample opportunity for both would-be religious and secular new authoritarians. Along with inclusive and democratic, the key label and environment that seems to be lacking in the Egypt debate is free and open society-political environment. Such would allow the current impasse to be reconciled via genuine debate of the past, current and most critically the future of Egyptian politics and governance. Instead, "inclusive" versus "democratic" has become the battle cry for an apparent street battle to the end where only one will prevail.

Allowing Egyptians to resolve the current crisis and define their own future would normally be the most appropriate and longer-term constructive policy. However, it is evident that some on either side of the political divide are seeking to draw battle lines. Reports of attacks upon churches to killings of police officers to killings of jailed protesters, as well as the crackdown have aided in those who want to polarize and then impose their own vision of authoritarianism, whether religious or secular/military. In this environment, the international community cannot ignore the human rights risks/abuses as well as threat to international peace and security posed especially in view of Egypt's pivotal geographic, political and cultural role.

UN as Forum for Resolution?

The United Nations stands out as perhaps not only potential but perhaps catalytic institution to help address and resolve Egypt's deepening crisis, on levels of democratic-human rights as well as Egypt's pivotal position. Even if the current violence begins to ebb, the internal unrest/conflict is likely to perpetuate, driven perhaps by legitimate grievances and over ambitious agendas. UN officials, from UN Secretary General Ban Ki-moon to UN Human Rights Chief Navi Pillay have sought to employ both code words, inclusive and democratic as to indicate a balanced approach to resolution but also evidence a divided and indecisive international community. However, that does not mean that these officials are not cognizant of the broader implications, from the implications for neighboring post-revolutionary Libya and Tunisia, to transitioning Yemen and Somalia to the yet to be effectively addressed civil war in Syria.

The legal precedent of Egypt is also relevant in a broader global context as it relates to aspiring democracies and the role of national military. As a multi-religious society, Egypt, as Syria, Ivory Coast, Cyprus, Northern Ireland, Myanmar and Bosnia, risks tearing apart the fabric of co-existence and prosperity through diversity. Finally, will there be accountability for the current violence and is it possible for the International Criminal Court to play a guiding if not direct role?

Egypt is too important for the region and beyond as well as for its citizens, and Egyptians pride themselves on being a cultural and political leader in the area and world. It is both symbolism and the pivotal geo-political position. Foreign interests/ambitions may be contributing to the current situation but an unstable Egypt will roil the region and international relations. The lessons of Syria are relevant. Foreign interference may be both tempting and perhaps desired by some, but the internationalization of the Egypt crisis is already well underway. A forum as the UN may be desirable as well as unavoidable in order to avoid the escalation and internationalization of the strife as has been witnessed in Syria.