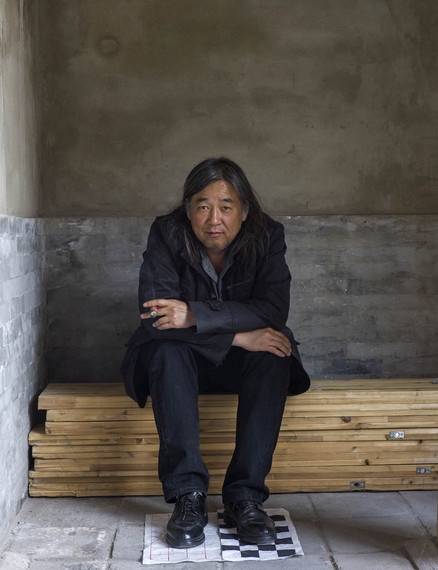 "I am not afraid of dying. I am afraid of no longer living."

"No Comment" is the title for the opening of the exhibition of Chinese artist, Yan Pei Ming, at the Center for Contemporary Art in Málaga (CAC, Centro de Arte Contemporáneo).

Yan Pei Ming (b. 1960, Shanghai) grew up during the Maoist Great Proletarian Cultural Revolution and worked as an artist to support the regime. Later on, he was part of the first group of artists to flee China in 1980. With great expectations, he arrived in France to study Fine Arts and earned a degree in that subject in Dijon, Paris and Rome. This geographical, cultural and artistic shift has had a substantial impact on his work.

The work of Yan Pei Ming stands out because of its decisively simple palette of red, white and black, and its forceful yet precise brushstroke line that sends us into his private world. His work primarily focuses on the portrait, an artistic genre that he depicts by emphasizing the psychological burden displayed by his iconic subjects. When you enter into the Parisian studio of this French-Chinese artist, you get the immediate sensation that you've not only traveled through the history of Western painting, but also that you've seen traces of the time period when he was working to support the Mao regime. All in all, Yan Pei Ming is, perhaps, one of the best examples of what it means today to be an artist in a global world -- where human beings, in a particularly dramatic way, are confronting experiences of solitude and death.

Elena Cué: You grew up in China in the midst of the Cultural Revolution and then relocated to France when you were 20 years old. You studied for five years at the National Superior School of Fine Arts in Dijon. What was the pictorial evolutionary process like going from the limitation of propagandist art to support the regime to complete freedom?

Yan Pei Ming: At that time in China, the influence on painting was from the classical tradition originating from the Soviet Union. It was propagandist painting to support the regime at that time. Those five years that I spent at the National Superior School of Fine Arts in Dijon were years of absolute freedom for me. From that moment on, I was able to combine what I learned from propagandist painting with a very individualized view of today's world. My freedom of expression is very noticeable in my current work.

E.C: How did you survive the East to West cultural shock, going from a communist regime to Mitterrand's Socialist France?

Y.P.M: In France, individuality was what stood out. In my opinion, the politics of François Mitterrand were, no doubt, socialist, but still liberal.

E.C: You graduated from the French Academy (Villa Medici) in Rome in 1993. What was your impression of Italy? What was that experience like?

Y.P.M: It was one-of-a-kind. I had an incredible year. It was as if I was in paradise, following the steps of all of the great painters that had come through this city. Those old masters help me to understand art from the past and they pave the way for me to make art that must be done nowadays. It was an unforgettable experience for me. 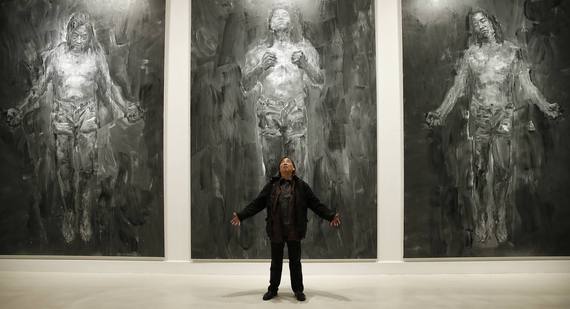 E.C: What memories do you have from childhood?

Y.P.M: My childhood was blessed, but lonely. Even from my earliest years, I was in my own universe. I always dreamed of being a painter because I could express myself without words. That's powerful.

E.C: You have painted your father several times, even dead. Tell me about him, please.

Y.P.M: I have always done portraits of my father, just as much in China as in France. I have captured him at different times in his life, and at different ages. My way of seeing him has evolved over the years. Also, there are oftentimes characteristics and defects that I've been able to find in the titles of those portraits. It's true that the way in which a child sees his father is not the same way an adult sees an older parent. I think that my portraits of him bring that to light. 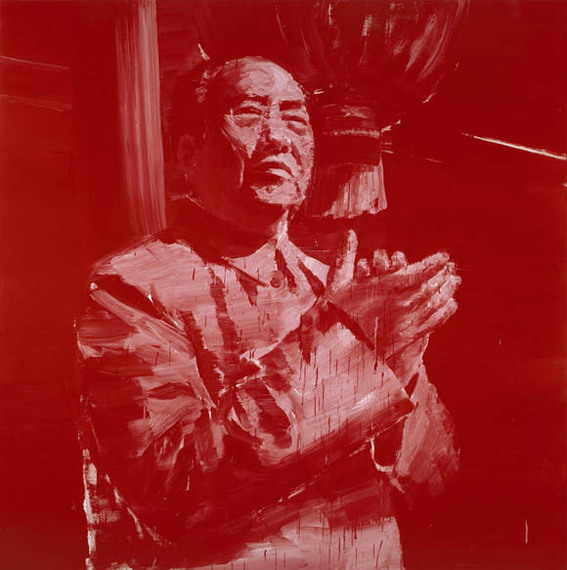 E.C: You have depicted Mao on several occasions. What does that mean and who is Mao, in your opinion?

Y.P.M: He has been present in my work since I was a boy. His was the most copied and most widespread image in China. That left a mark on me. I also remember that my first lesson at school was entitled, Long Live President Mao! He is a mythical character.

E.C: Your 2009 exhibition, "The Funerals of Mona Lisa," made you the first Chinese artist to exhibit at the Louvre Museum. A huge portrait of Mona Lisa was accompanied by four paintings: two self-portraits depicting skulls from the cranium scanner, a portrait of your dead father and a self-portrait in which you pretend to be dying, which tops off the exhibition. Why is Mona Lisa crying? Can you explain this peculiar scene?

Y.P.M: It is a piece that I did in 2009 for the Louvre. It is a polyptych called, "The Funerals of Mona Lisa." I reinterpreted Leonardo da Vinci's portrait to be Mona Lisa crying at her own funeral and in front of spectators. My expression is similar to that of Marcel Duchamp after adding a few whiskers. 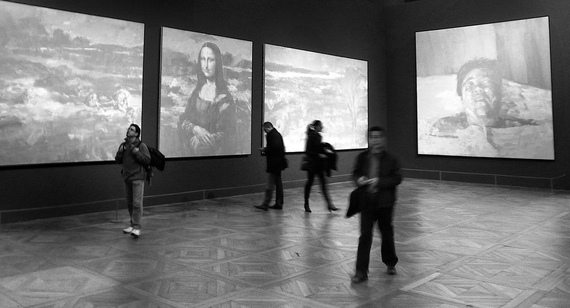 E.C: Your existential concern began at a very young age. The ongoing presence of death in your thinking is constantly represented in your work. Does the idea of death make you reaffirm life?

Y.P.M: A lot of emotional states appear in my work: my anxiety, my pain, my uncertainty. It is important for death to be present as well -- and, of course, energy and life. I don't need to sugarcoat or make things fancy. Paintings aren't for cuddling.

E.C: What worries you most about death?

Y.P.M: When I think about death, I rise up. From that point on, I work even harder to fill up on life. I'm not afraid of death. I'm afraid of no longer living.

E.C: Iconic paintings of art history and celebrities, your self-portraits and the representation of your father. Do you think that it is a way to transcend?

Y.P.M: I'm interested in everything, just as much art history as historical figures and the anonymous. The construction of history and sociopolitical issues interest me a lot. They all form our world as well as my painting. 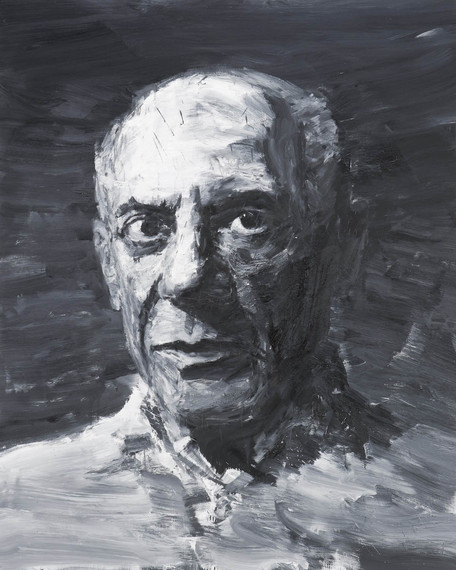 E.C: Much of your work involves portraits, primarily figures, politicians or celebrities with sometimes serious and solemn expressions, yet kind and friendly other times. To what extent do portraits relate to the passing of time, as it does with Rembrandt?

Y.P.M: You're right. Rembrandt is a master portrait artist, especially the self-portrait. He's an important artist in my eyes. He's not the only one. There are also French, Italian and Spanish painters like Goya, El Greco, Velázquez and Picasso.

E.C: The revealing and fierce strength in your pictorial expression, combined with the huge sizes of the canvases and the drama of your simplified color palette of white and black or white and red really emphasize the emotional burden that's conveyed by those depicted. What are you most interested in drawing out from each character? 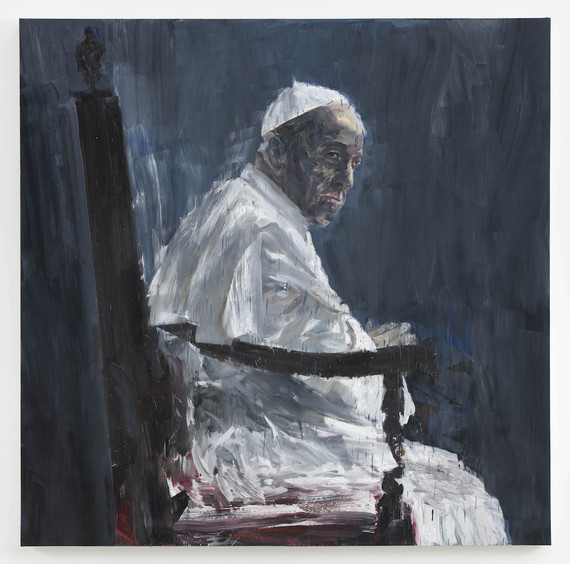 E.C: You stated on one occasion, "What interest me about a person are their attitudes, fears and lives, which are often tragic." Is the goal to feel less alone when facing one's fears and one's existence?

E.C: In your series on killers -- people that randomly snatch life away -- what is it that interests you about them?

Y.P.M: Animals have always fought to survive. I think that the same thing happens with man. Conflicts, wars and injustices are characteristic of man. 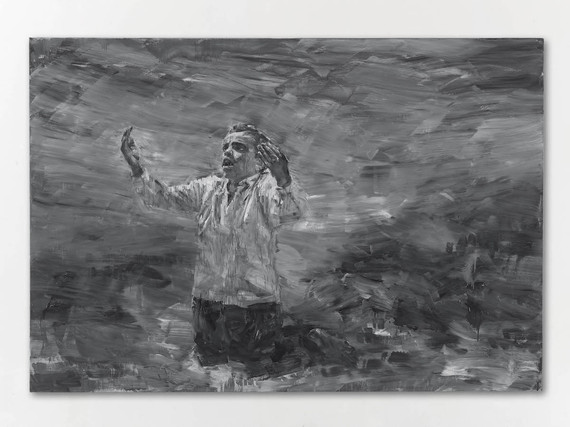 E.C: As an artist, where do you see beauty?

Y.P.M: To me, beauty is found in painting.

E.C: Your interest in Goya shows up in your reinterpretation of The Executions of May 3 or in Picasso, whom you've depicted. Have you been to the Prado Museum? What do you think of our Spanish masters?

Y.P.M: I've visited the Prado Museum several times and it has impressed me every time. When I was at art school in Dijon, one of my professors, Jaume Xifrá, made quite an impact on me. He was Catalan and spoke to me a lot about the Spanish painters. 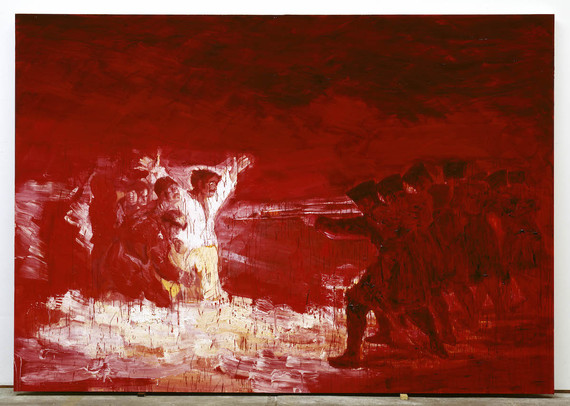 
E.C: Do you believe that there's a dividing line, or at least some difference between the Chinese artists that left China after the Cultural Revolution and those that stayed?

Y.P.M: There are differences between the artists that departed and those that remained. Without a doubt, their environments and lifestyles are different and therefore, their work is as well. In regards to myself, I would say that, as of today, I am a nomadic artist without borders. I am just an artist.

E.C: Your work deals with war and peace, money and globalization, capitalism and communism, with death as the backdrop. Is this your view of the world?

Y.P.M: My view of the world is pretty pessimistic. I don't believe in peace. Since the beginning of man, war has existed and it endures. It makes me think that man will continue fighting until the world is destroyed.