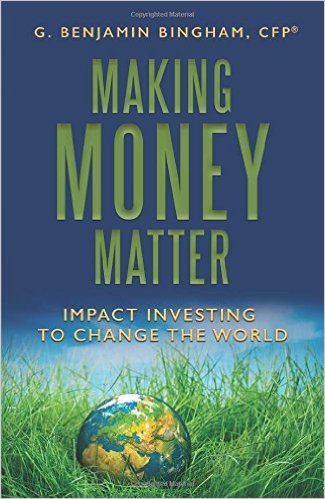 The integrity of our culture and the safety of our planet are waning under money's perpetuation of greed. Money is largely regarded as the measure of personal wealth and the pathway to material possession with little regard for its potential to halt societal and environmental degradation. In his recent release Making Money Matter: Impact Investing to Change the World, G. Benjamin Bingham invites readers to reevaluate their relationships with money, and to consider it a tool for positive change.

The book chronicles Bingham's personal and financial journey to contextualize his philosophies of Positive Impact Investing. His path to becoming an impact investing fund manager began as a student of biodynamic agriculture. Bingham worked at his uncle's farm while establishing his own, and eventually founded an intentional community based on agriculture that provided work, housing, and acceptance to young adults with developmental disabilities.

Bingham's connection to the land and its inhabitants guided him as he began his financial career at mainstream investment firms. He writes that his "training in sustainable agriculture became the framework for most of my work, right down to how I think of financial portfolios as ecosystems." In an industry that often "fixates on money for money's sake," Bingham developed a philosophy that instead considers money an extension of an individual's ethics and a catalyst for the creation of a better world.

Making Money Matter: Impact Investing to Change the World imparts a humanistic approach to investment. Bingham authoritatively presents the follies of greed while maintaining a tone of compassion. The genuineness of Bingham's writing reveals his altruism and inspires readers to actively guide the world economy onto a pathway of morality. He argues that at stake is the intactness of our environment and continuation of humankind. "Will we invest to survive, or better, for future generations to thrive?" he writes. "You will decide with your money! How it is spent, loaned, borrowed, gifted, or invested will determine this planet's future."

In order to combat "global weirding" and promote societal justice, Bingham offers high-impact investment solutions. His strategies are straight-forward, pragmatic, and universal, focusing on long-term impact in place of the "short-term reactive emotions of greed and fear." Bingham also explains that generating returns and doing good are not mutually exclusive; investors can make money while supporting the prosperity of our planet.

In an era of environmental crises, wealth disparity, and social upheaval, Bingham's Making Money Matter: Impact Investing to Change the World is a timely call for ethical investment to summon peace. Drawing parallels between nature's processes and economic functions, Bingham redefines our perceptions of money and our roles in the preservation of this earth. He speaks to his readers as a friend, gently guiding them toward self-reflection to spark change. Bingham's words and advice profess his belief in the potential of humankind to incite harmony in this world we share.