After the horse meat scandal shook consumer confidence across Europe, we were wondering: Is it legal to buy and eat horse meat here in the U.S.? And if so, what does it taste like?

So we set out to buy some.

While it's legal in most states to buy and sell horse meat, we couldn't find a supplier here in the U.S., where the last horse slaughterhouse closed years ago. However, we were able to find a wide selection of horse jerky from a small company in Wales and have some shipped to our offices in New York.

Cowley's Fine Food, which sold us the horse jerky, buys its horse meat frozen from Kezie Foods, an exotic meat supplier in Scotland. The meat is marinated and air-dried to make it into jerky. 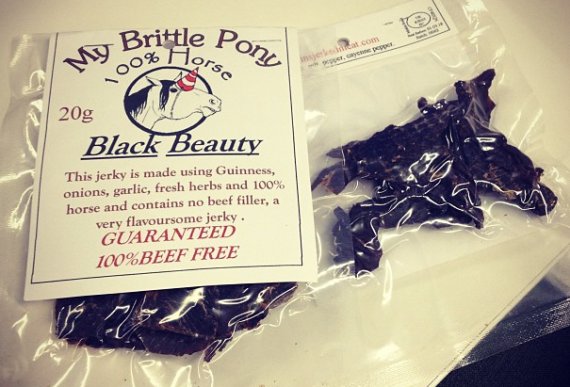 But is it any good? We decided to do a blind taste test to see if people could tell the difference between horse and beef -- and to see which they liked better.

While most of our fifteen contestants (66 percent) were able to correctly identify which meat was which, the beef jerky's taste earned only slightly higher ratings than the horse. Some contestants actually preferred the horse.

Click the video above to watch the horse meat taste test.

Although we bought our horse jerky from the U.K., horse meat is not common there. Indeed, British people seem to have the same cultural aversion as Americans do to eating horse. Nevertheless, there are a handful of horse slaughterhouses operating in the U.K., whereas in the U.S. there are none.

President Obama, however, re-authorized funds for horse slaughterhouse inspections in 2011, and a horse abattoir in New Mexico is scheduled to open at the end of April.

Making horses into meat was effectively illegal in the U.S. from 2006-2011, but for years the U.S. has allowed horses to be shipped to slaughterhouses in Mexico and Canada, where eating horse meat is more popular. A proposed law would end the practice of shipping horses outside the U.S for slaughter.

Animal rights groups say that horses sometimes endure cruel treatment while being transported and can suffer unnecessarily prolonged deaths at such slaughterhouses.