Unlike fans of the Beastie Boys, we didn't have to fight for our right to party. As we boarded the S/V Mandalay in St George's Grenada for the beginning of our 5 day sailing trip, the crew welcomed us aboard, then thrust rum swizzles into our hands and continued to ply us with drinks for the rest of the evening. And we still had a good 15 hours to go before pulling away from the dock.

It was near the beginning of the sailing season and Windjammer Sailing Adventures, my host for this trip, was in its first year of operation after the venerable Windjammer brand ran aground after several years of financial turmoil. Same ship, new owners. Many onboard were there to relive earlier adventures on their beloved Mandalay, a classic three masted schooner built in 1923. 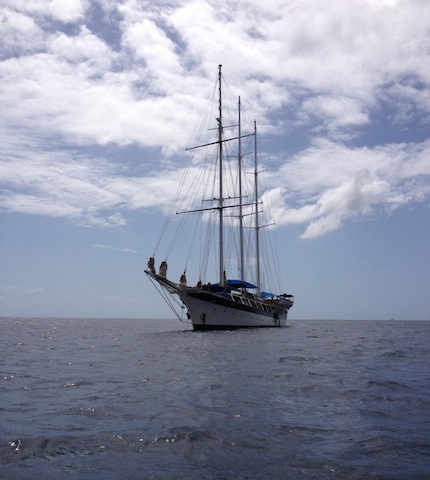 For the next several days, I spent hours on deck looking at the wind-filled sails framed against the sky. The deck surged beneath my bare feet as the boat powered through the swells, and the music of the lines vibrating in the wind filled my ears. As the days unfolded, I melted. Everything felt looser -- my clothes, my limbs, my mind. 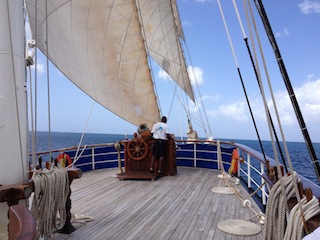 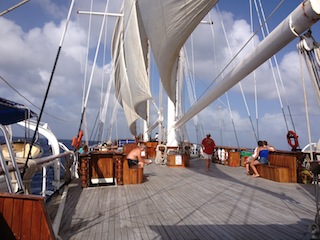 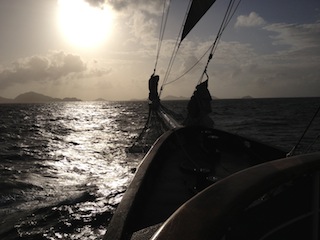 There was also plenty to do besides eat, drink, nap and gaze with heavy lids at the sails and scenery. I went snorkeling twice, once on a sliver of sand, aptly called Sandy Island, with great snorkeling just a few feet off shore. 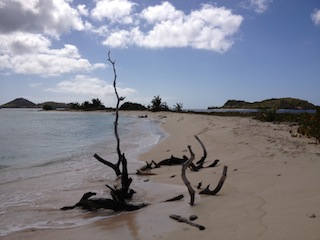 My favorite spot was the Tobago Cay Marine Sanctuary. It was less scenic, more crowded, had fewer and less colorful fish, but it had one very important plus -- big sea turtles. On my first attempt I saw nothing but surf, sand and seaweed. Then someone pointed out where she had spotted a couple of turtles a few minutes before. I gave it another try. After only a minute or two, a turtle swam by me just a few feet away in the murky water. I followed her (him ?) for almost a minute, then spotted another, then another a minute or two later. In total I saw four, including two that were more than three feet in length from snout to tail.

We also visited some of the islands - the Old Hegg Turtle Sanctuary on Bequai; sleepy, laid back Union Island; and Carricou for great views of an off shore reef and cays filtered through a haze of moist heat that added to my loose, lazy, relaxed state. 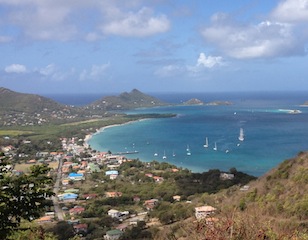 All of that was part of the plan. But it was the moments off the plan, when serendipity took over, that were the most memorable. One day we visited Kingston on the island of St. Vincents, one of the largest cities in the Grenadines. As we wandered around the town, we passed a preschool and stopped to watch the kids play. I couldn't help but notice how attentive and caring the teachers were as the kids ran around, squealing with unfettered delight.

Then we headed across the street to St. Georges Cathedral to eavesdrop on an assembly for several hundred students from kindergarten to high school, part of a literacy program for the schools on the island. One of the speakers urged the students to read books instead of texting on their cell phones or playing video games. She led them in a chant; "Be the change, READ! Be the change, READ!..." Many of the students fidgeted in their seats.

Later, after the assembly ended, they could no longer contain their pent up energy and ran around and chattered away while their teachers tried to herd them into orderly queues. The teachers never scolded or scowled, smiling instead and speaking softly as they lined them up and led them back to their schools.

Afterwards we looked for a place to eat lunch. On a side street off the main drag we discovered "Gail's Cuisine," a colorful hole-in-the-wall with a sign featuring its dish du jour, stewed chicken on rice. Now that might not sound all that appetizing to you, but it was delicious, especially when sprinkled with hot sauce and washed down with a cold beer. 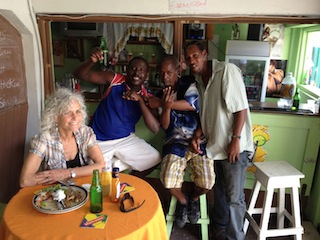 But it was Gail and the other customers that really made the place special. Within a couple of minutes they were treating us like old friends. Maybe it was the hot sauce - I loved it and they seemed pleased that I did. I've learned from years of traveling that having a genuine interest in other people's cultures, especially their food, is the best way to connect with them. Easy for me, I love to eat.

In fact, even with the sun, sand, sailing, swimming, and snorkeling...and, of course, the drinking...this was the part of the trip I remember most fondly. The people of the islands were some of the friendliest, most playful and entertaining people I have ever met. With a smile on their face and a twinkle in their eye, they warmed my soul even more than the sun, the sand and yes, even more than the hot sauce on my plate of stewed chicken and rice.