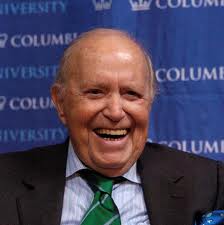 John Kluge, entrepreneur extraordinaire and one of the great benefactors to Columbia University, the University of Virginia, and the Library of Congress has passed away.

Of modest means and son to a family of immigrants from Germany, (where he himself was also born), Kluge was given a chance at a college education by Columbia University in the early 30's- receiving a scholarship that allowed him to attend and receive an Economics degree in 1937. He was never to forget this opportunity and its significance to his life.

The cumulative donations he has made to Columbia during his lifetime, and now, upon his passing, total in excess of $500 Million. All of this money was donated by him for the express purpose of providing financial aid.

There are many stories today that cover his extraordinary entrepreneurial career in the press. You can find a few of them here, and here.

I will simply leave you with a few simple references to quotes he made in the rare interviews he granted over the years. I need not also elaborate on how important I think it is for Universities to do all they can to encourage and cultivate the entrepreneurial spirit in their student body.

"Work isn't really work for me, I didn't think I've ever really 'worked' in my life, because 'work' to me means that you're really doing something that you don't like. I hate to tell you this, but I've never liked the weekend in my life. I was enthusiastic about Monday morning from the day I left college."

John Kluge (as told to Forbes Magazine in a 1990 interview)

"Young entrepreneurs should spend an awful lot of time thinking about what they want to go into," he added. "The last thing you want to do, unless it's a very unusual situation, is to invest money. You should have a fund of knowledge of something and out of that you make up your mind. Money is not a fund of knowledge."

"Kluge "wasn't particularly a man who wanted to be rich or enjoy a grand life," Patricia Kluge, one of his ex-wives. "He took a small idea and turned it into something grand."

As told to Washingtonian Magazine by Patricia Kluge, one of his ex-wives, in 1990.

"In 2007, Kluge pledged a $400 million donation to his alma mater, Columbia University in New York City, designated for financial aid to students. The gift was the largest in Columbia's history and, according to the Chronicle of Higher Education, the largest ever to be earmarked exclusively to help students afford tuition."