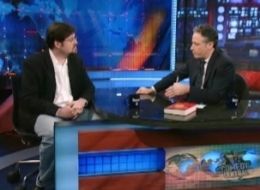 Conservative politicians and authors have always had a place on The Daily Show, and for better or for worse host Jon Stewart has always welcomed them to the set warmly for a debate that, while often spirited, usually doesn't veer into the hostile. Last night, however, Daily Show viewers noticed something odd: An edited-in intro to the interview by Stewart warning viewers that they were about to see an edited version of the interview that was "choppy as hell," cut down from "about 18 minutes" to a standard 6-minute length. "We did the best we could," apologized Stewart.

Well, congratulations must be in order to Jonah Goldberg because he broke the mold. Stewart's program is taped and, while there are occasional coy nods to that fact, this fourth-wall-breaking type of address has never been done before in the history of the Daily Show . Comedy Central representative Steve Albani confirmed that fact, and also told us that, while it's "rare" that interviews run long, they are obviously cut for time as required. Albani also confirmed that 18 minutes was particularly long for such an interview.

So — what happened in that interview that made it so difficult to edit seamlessly and necessitated such an unusual intro? We've put in an email and a call to Goldberg for his side of things, because apparently that's the only way we're going to get the story, since Albani say there are no plans as of yet to post the full, unedited interview online. He did confirm, however, that Jon Stewart had read the book.

We'll get back to you with Goldberg's response when we get it (we know he'll be in touch because we met him in New Hampshire and he was very jolly). In the meantime, enjoy this choppy interview! The Daily Show did the best they could.