On June 22, 2002, I interviewed Julia Child at her home in Santa Barbara. After ten minutes of ringing the front doorbell, I timidly ventured round to the backyard to find her seated on a patio vibrant with plantings and comfy outdoor furniture. She greeted me with a hand wave and smile, gesturing that I should join her.

I came bearing gifts: an apron I'd sewn especially for Ms. Child and a bottle of champagne. Ms. Child unwrapped the apron -- all ruffles and at least 10 sizes too small -- held it up and in her distinctive voice said, "Oh, dearie, dainty doesn't do in the kitchen." Then she sweetly handed it back to me. I quickly produced hostess gift #2. Sliding the bottle from its bag, she rewarded this present with a nod and murmured notation that this gift she would not be returning.

Seated across from one another at a small, cloth-covered table, we talked while she ate a simple lunch of an unadorned hamburger patty and sipped a pint carton of milk through a little straw. We conversed about my apron journey, the storytellers whose apron memories I'd collected and her personal apron story. In case my tape recorder failed to capture every syllable of her priceless recollection, I took down her words on a little notepad, utilizing a sort of frantic shorthand I hoped to God would later be decipherable.

Ms. Child told me that she hadn't had much experience in the kitchen and hadn't even worn an apron until she met her husband. Newly married in 1949, they moved to France, where she tasted French food and knew right then she wanted to learn about French cooking. Following the tradition of the Cordon Bleu cooking school, she began wearing the chef-type blue denim apron with a towel draped over the waist ties. "When Paul and I cooked together, he wore the same type apron, only folding the bib at the waist and hanging a towel from the apron pocket," she told me.

As soon as she began talking about her husband, sadness misted her face, and I was no longer sitting across from an icon. I was in the presence of a woman who'd lost the love of her life. "Paul and I always had breakfast and most of our meals with one another. After his retirement, we often ate at home in our kitchen. Upon his death in 1994, Paul and I had eaten together for almost fifty years." Fifty years.

Perhaps it was her sigh, or the controlled tidying of her cutlery, but in that instant she was my mother, also widowed and emotionally adrift without her prince charming. And just as quickly, my nervousness left me and for the next hour, we conversed easily, like old friends.

With Ms. Child in the lead on a shiny blue walker with handle bars, hand brakes and a basket, we walked single file from the back patio through the house. Graciousness personified, she acquiesced to my request for a photo of her in the doorway of the kitchen -- a miniature replica of the kitchen in the home she and her husband had lived in that is now housed in the Smithsonian. 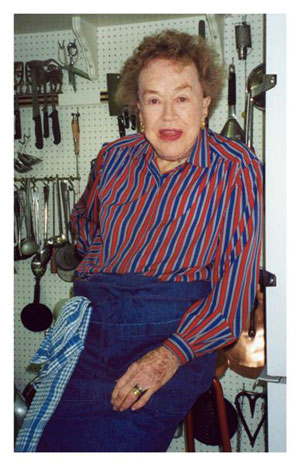 Tying on her apron, she perched on a stool and noted the wall-mounted microwave as more an annoyance than convenience. Kitchen chitchat with Julia Child. I was in heaven.

The digital recording of that interview has been in a fireproof box for a decade, so fearful am I of erasing it. 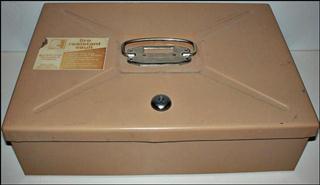 Recorded is over sixty minutes of conversation, revelation, poignant recollection and homey, personal advice and wisdom that I've integrated into my life. Julia Child was a teacher of more than cooking. 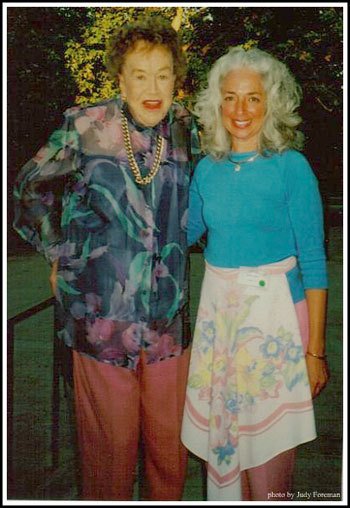 Since misplacing the key years ago, I've decided to just let that day stay as is: locked away from sight, but not of memory.

Author, "The Apron Book, Apronisms, and The Kitchen Linens Book"