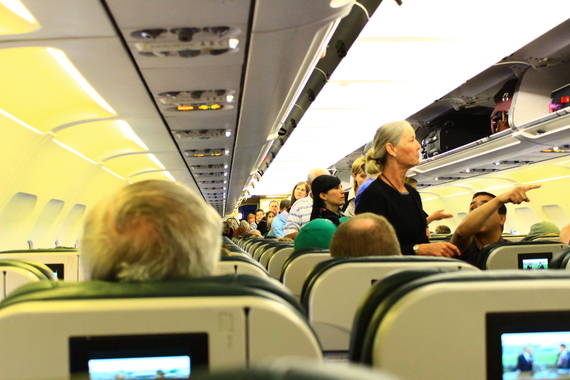 There I am again, shuffling down the jetway with my laptop slung over my shoulder, the line barely moving. We're 10 minutes from our scheduled departure, but the flight will undoubtedly be delayed -- we're only on Boarding Group TWO!

And once we do finally take off, despite the captain's comforting reassurance over the intercom that we'll be traveling back in time and/or making it up in the air, we'll probably still arrive late. Forcing all those people with tight connections to rush to the front, while the rest of us take an hour to deplane.

And whose fault is it? The airlines? The FAA?

No, it's all the people with those goddamn roller bags. Seriously.

Rollerboards, or more specifically, the people who brag about "NEVER checking bags" are ruining flying. And it's not just because boarding is only slightly slower than a 7-Eleven line on PowerBall day. It's because now that we have to pay baggage fees, everyone thinks they can bring a full suitcase on board so long as it fits through the TSA X-ray machine. Completely ignoring the fact that rolling a trunk filled with your pet rock collection might, just might, impact other people. Those inflexible bags (and, honestly, giant duffel bags, too) and that me-first mindset are the root cause of our biggest gripes about flying. 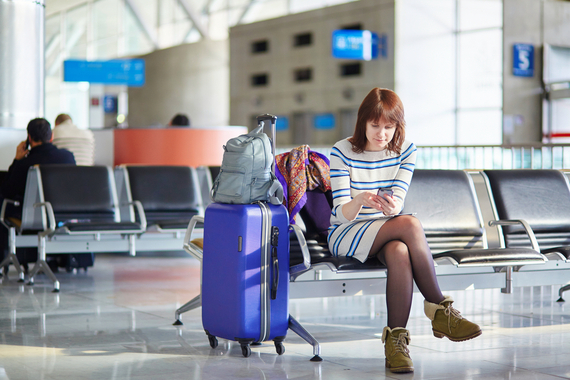 Seat recliners: it's not all their fault
OK, so you're probably saying, no way dude -- screw the airlines for charging me a checked-baggage fee, carry-ons FOREVER! And even still, seat recliners are a much bigger problem than roller bags.

Well, you have half a point. In a recent survey from Expedia, 32% of travelers rated them as the worst people on the plane. But are they really? Think about it: When a passenger decides to stuff two weeks' worth of clothes into an obese bag and then takes 10 minutes trying to cram it in the overhead bin (wheels out, dammit, wheels out. No, no, not sideways!!!), what should traditionally be his "carry-on" (you know, that bag with his laptop, iPod, and copy of Divergent) now must go under his seat, leaving no room for his legs. Which are then, of course, crushed when the guy in front of him decides to lean back.

And there you go, carry-on bags equal fistfights, chokeouts, and quite often diverted flights so that unruly passengers can be removed.

Maybe I exaggerate, but if we all just checked bags like sane people, put our small duffles with essential items in the overhead bin, and relaxed a little, I'm guessing the seat-reclining wars would end. Or at least subside a bit.

More bags EQUAL more delays
But wait, in that same Expedia study, "people who rush ahead to the front of the plane" were rated as the most irritating passengers by a full 35% of respondents. A lot of those folks, however, have tight connections, made even tighter by the slow boarding and deplaning process caused by, you guessed it, the abundance of roller bags.

Yes, delays are caused by a lot of things. But the most common, according to the US Department of Transportation, is late-arriving planes from other destinations. A number of factors go into that, but interminable boarding times are definitely among them.

See, when you can't find bin space for your rigid rollerboard and then ignore the flight attendant's first three suggestions to check it -- before inevitably checking it when... whoa, look at that, there's STILL no space -- that causes a delay. And it's not so much the one guy holding up the line by trying to fit a small dishwasher into an overhead compartment, it's that SO. MANY. PEOPLE. are doing it. Multiply those extra minutes by 15 passengers, and you're approaching a significant delay.

And that's only the departure. When the plane lands, two dozen elderly women will no doubt be waiting in the aisle for a kindly person to help them lower their bags full of antique mahjong tiles. And if you've got a flight to catch, that's infuriating.

Obviously, you see the point I'm making: If boarding didn't take so long, and deplaning wasn't a half-hour procedure, people wouldn't be in such a mad dash to beat their fellow passengers to the front. And we would hate them less.

To find out more reasons why you should check your bag while traveling, get the full story at Thrillist.com!