KABUL, April 19 (Reuters) - A Taliban suicide bomb and gun assault on a government security building during Tuesday morning rush hour in central Kabul killed at least 28 people and wounded more than 320, in the deadliest single attack in the Afghan capital since 2011.

President Ashraf Ghani condemned the assault "in the strongest possible terms" in a statement from the presidential palace, located only a few hundred meters away from the scene of the blast.

The insurgency led by the Afghan Taliban has gained strength since the withdrawal of most international combat troops at the end of 2014, and the Islamist group is believed to be stronger than at any point since it was driven from power by U.S.-backed forces in 2001.

With nerves on edge in Kabul, a second explosion hit the city in the evening but no serious casualties were reported from the blast, which was caused by an improvised device, according to Interior Minister spokesman Sediq Sediqqi.

Police chief Abdul Rahman Rahimi said civilians and members of the Afghan security forces were among those killed and wounded in the morning blast, when a suicide car-bomber blew himself up outside the wall of a National Directorate of Security (NDS) office.

"I was here when a huge explosion happened," said Amir, who works in a nearby restaurant. "I saw three boys with severe head injuries. My uncle was injured and my brother is missing, I don't know what happened to him."

It was the worst single militant strike in Kabul since 2011, when about 60 people died in a suicide blast outside a mosque, and will reinforce concerns in Afghanistan and the West that the country is being dragged into a worsening spiral of violence.

Rahimi said one attacker had tried to slip into the NDS building through a destroyed wall after the blast, but he was discovered and killed.

The Taliban said on their Pashto-language website that they had carried out the suicide bombing on "Department 10," an NDS unit responsible for protecting government ministers and VIPs.

They said a suicide car bomber blew up the main gate at the front of the office, allowing other fighters, including more suicide bombers, to enter the heavily guarded compound.

Taliban spokesman Zabihullah Mujahid said in a separate statement that the attackers engaged in a gunbattle with Afghan security forces inside the building. He said as many as 92 security staff and soldiers were killed.

The Islamist group often exaggerates details of attacks against government and military targets.

A thick plume of black smoke was seen rising from the area near the sprawling U.S. embassy complex nearby immediately after the blast.

Warning sirens blared out for some minutes from the embassy compound, which is also close to the headquarters of the NATO-led Resolute Support mission.

The U.S. embassy and the NATO mission both said they were not affected by the blast.

The Taliban announced the beginning of their spring offensive on April 12, and fighting has raged around the symbolically important northern city of Kunduz since then, although the capital had been relatively quiet.

Kunduz, Afghanistan's fifth-largest city, fell briefly to the Taliban last September in the biggest blow to Ghani's Western-backed government since NATO-led forces ended their combat operations at the end of 2014.

Taliban fighters have also been making territorial gains in the southern province of Helmand, further stretching Afghan forces who have struggled to contain the insurgency.

Tuesday's blast came days after a United Nations report said urban warfare had caused a spike in the number of deaths and injuries among women and children in Afghanistan this year.

The U.S. embassy said the attack underscored the harm the Taliban continued to inflict on the Afghan people.

"Afghanistan deserves peace and security, not attacks that victimize parents taking their children to school, workers on their morning commute, and people who have stepped forward to help defend their fellow citizens," it said in a statement. 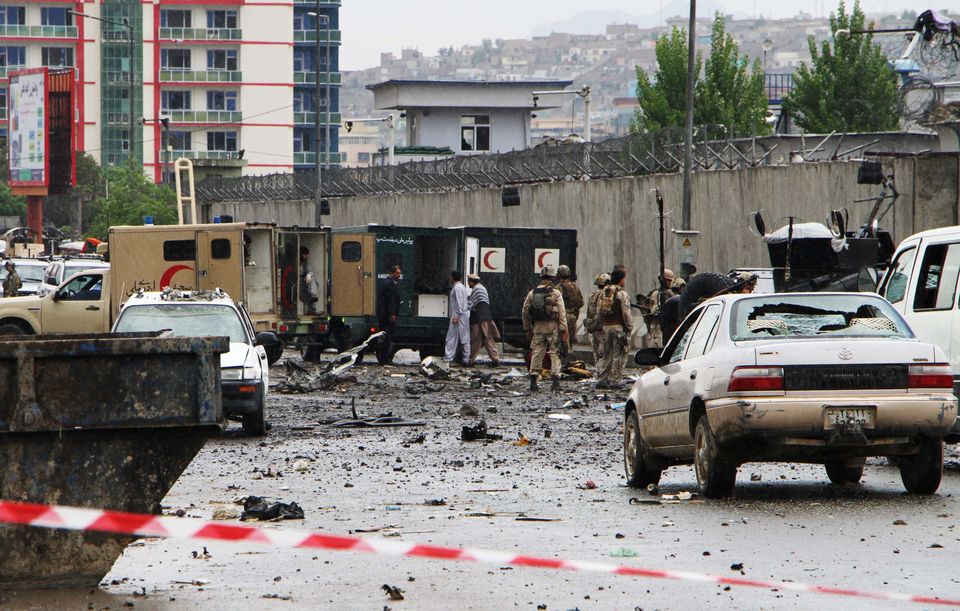 1 / 8
Policemen and officials inspect the site of an attack in front of a&nbsp;government&nbsp;office in Kabul, Afghanistan, on April 19, 2016. The Taliban claimed responsibility for the&nbsp;attack.
Haroon Sabawoon/Anadolu Agency/Getty Images