One Sunday morning earlier this month one of the most popular and most respected Vine users, Keelayjams, or Kyle M.F. Williams, tweeted away his password and account name, effectively letting anyone use his Vine account.

Overnight the account devolved into chaos as people tried to imitate Keelay's distinct videos, which often involve ridiculousness such as a saxophone on wheels rolling down the sidewalk or pasting a lifesize cutout of Michael Jordan on a wall advertisement of Kate Moss while wearing a custom leather jacket that says "KATE MOSS AND SOME MICHAEL JORDAN" on the back. Besides basic attempts at imitation, users posted obscene photos (because this is the Internet/of course) and a few even ended up changing his password to lock him out.

For those who are fans of Keelay's work like myself, I had a sort of nerdy desire to get the fuller story of what happened. Below is Keelay's long account of the night he temporarily "broke Vine" accompanied by some of Keelay's best Vines.

"Last weekend I met up with a lot of people from Twitter and Vine who just happened to be in the city so obviously a lot of the conversations were about nerdy social media stuff."

At some point late Saturday night I felt a bit overwhelmed with how much talk was focused on internet things and had a bit of an "I don't give a shit about any of this" moment so I tweeted out my email and the password to my Vine account. 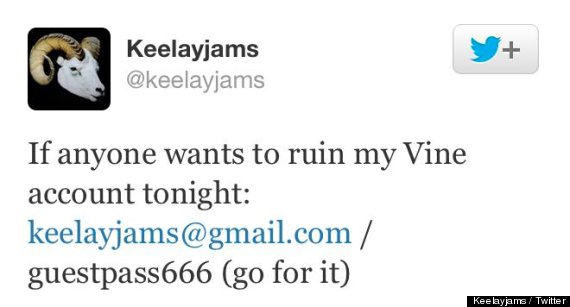 Then my phone's battery died.

I cabbed home and fell asleep. The next morning I plugged my phone in to charge and was welcomed with a barrage of notifications. My wife was already up and scrolling through my Vine account, confused. There were over 30 videos posted from about 3 AM to 7 AM of various quality on my account (and possibly more that were deleted as people logged in and took over).

They changed my display name and avatar, subscribed to themselves, unsubscribed from people I had been subscribed to, revined whatever they wanted, and created their own videos that got blasted out to the 64,000 followers I had. Though I wasn't awake for any of it people claimed I "broke" Vine with the amount of content running through my account.

Of the videos made by strangers on my account a lot of people poked fun at my style of Vines (single shots of strange items, throwing food on things, things on fire, referencing past Vines I've done). Other videos were selfies, some short monologues, songs, some people's pets, a slow pan over a field of hand drawn dicks with soft rock playing in the background. And the comments were brutal.

I lost around 3,000 followers that night plus I was locked out of my account.

When I tried to login with my email and password (which I reset) I was brought to a user named Landon. He had 123 followers and his quote and location below his account name read "I love God. Ephesians 6:11. Earth" and the account was full of revines from very popular Vine accounts. No matter how many password resets I did I still ended up in this kid’s account. I asked for some help on Twitter and got a response from a Vine developer who effectively reset everything back to normal.

I downloaded all of the videos from the stunt, threw them up on a tumblr (hackedjams.tumblr.com), and deleted them all from my Vine feed.

I have fun with the internet but it gets stale. I was spending too much time conceptualizing and creating 6 second videos.

I got hooked on "likes" for a little while and created content that I thought would get that kind of attention. But then, right before I tweeted "If anyone wants to ruin my Vine account tonight: keelayjams@gmail.com / guestpass666 (go for it)" I just didn't give a shit.

I like to think that the 4,000 followers I shed during the "hijack" were the teens and tweens of the "I don't get it," "this is dum," "you just wasted perfectly good food" comment-camp, but they're still there and multiplying. Most people saw it for what it was: A stunt, a performance piece in a way, seeing what would happen if you just let anybody take control of something that you've spent months creating and curating.

The last user to login somehow locked me out. No one deleted any of my previous work or commented hateful things on other accounts while using my name (I don't think). I got a couple missed phone calls and a heavy-breathing voicemail from people who found my phone number on the "Settings" page.

A week prior I had given the same password out to 4 people I enjoyed watching on Vine and they were going to create videos on my account merging their styles and mine. It was fun and they all got more followers and eyes on their work. But it was very structured and I had rules for my guests to follow, so each day another person would login to my account, create a Vine, post it with their name, and log off. All of those Vines were well engineered and artful. This hijack stunt was a shit-show.

I love to fuck with the format and Vine is perfect for that because of its simplicity. Record this part, don't record that part, post it. And people have done really cool things with it and getting "internet famous" on it, but as the follower count grows so does seriousness and ego. I had to take a step back, give a little ¯\_(ツ)_/¯ and realize that they're just 6 second videos, who cares."