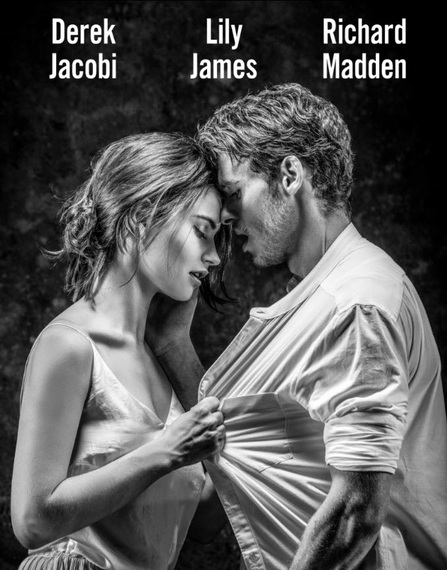 Romeo, Romeo wherefore art thou Romeo? How many women throughout time have uttered these words with the ardent wish to experience perfect love? For fair Juliet, it is love at first sight that compels her to call out into the night and we all wait with her in the dark for HIS response.

Thursday evening, Kenneth Branagh's Shakespeare Company's Romeo and Juliet will screen nationwide through Fathom Events, the company that brings filmed live productions of theater, opera and more. The stage show will continue to run in London at the Garrick Theatre until August 16.

Branagh gave us King Henry in 1989 and his talent was off and running. With co-director Rob Ashford, this Romeo and Juliet stars Downton Abbey's Lady Rose and Richard Madden (Game of Thrones) as the star-crossed lovers. Meera Syal plays the Nurse and Sir Derek Jacobi is Mercutio, best friend to Romeo.

I have tried hard not to read the reviews, though two notes could not be avoided... Lily is terrific as a teen-age Juliet and Jacobi's command of his instrument and long experience performing Shakespeare makes for a not-to-be missed performance.

I had the opportunity to speak to Sir Jacobi moments before he was gearing up for the next performance.

His voice is soft and with perfect elocution. I asked him how he was able to capture a younger Mercutio from his revered age of 77.

He told me a story about George Orwell's trip to Paris. There, he and his friends meet an older man sitting at the café, with his drink. The group all gets on famously and when the older man leaves, the bartender shares with Orwell, that the man, a regular, was none other than Oscar Wilde. He was just like one of the boys, witty and sharing stories from his own experiences, much like Mercutio's reflections of his own life, where in his Mab speech, he displays all sides of himself. He sees the fun side of life and makes jokes, usually of a questionable, if not Elizabethan, sexual quality.

Mr., Sir, Jacobi's, technique is to find his emotional anchoring in a character. He can't start a role until he's established this anchor, inside himself. Of course, though anchoring is different with different characters, he insists that there is only one spirit, one imagination that comes through all of his characters.

I had read that he is part of a community that believes William Shakespeare did not write any of the plays. He concurred, and though positive that the "man from Stratford" is not the author we all revere, that no one yet is certain who the real Shakespeare is.

Not to worry. Romeo and Juliet is a beautiful teaching of love and hate and redemption. And how great to see it live on the screen. Save your popcorn napkin to catch the tears.