Sure, we've heard of grand theft auto. But what about grand theft donut? That's the best (or worst?) joke we could think of about the recent theft of a Krispy Kreme donut truck, which was loaded with the fried treats.

Police say James Freddy Major jumped into the truck as its driver unloaded a delivery at the Quick Stop convenience store at an Exxon gas station in Dacula, Ga. What followed was a nearly 15-mile chase by police down Highway 316 and Interstate 85, with Major reaching speeds of up to 70 miles per hour. He appeared to be under the influence at the time.

Major eventually drove himself into a dead end in a residential neighborhood, where he plowed into a mailbox before attempting to flee on foot. Police and K9 dogs soon caught up with him, and it was off to jail for Major.

According to local station WSB-TV, Quick Stop store worker Susan Patterson was flabbergasted by the whole thing. "Could you imagine going down the interstate and seeing the Krispy Kreme donut truck with the cops chasing behind it?" she said. "Flashing lights? What would you think?"

Shop owner Peter Thakkar at least had a sense of humor about the whole thing. "Nobody would like the donut that much he would steal the whole truck,” he told WSB-TV.

Check out a news report on the incident below. Just a warning: donut jokes abound. 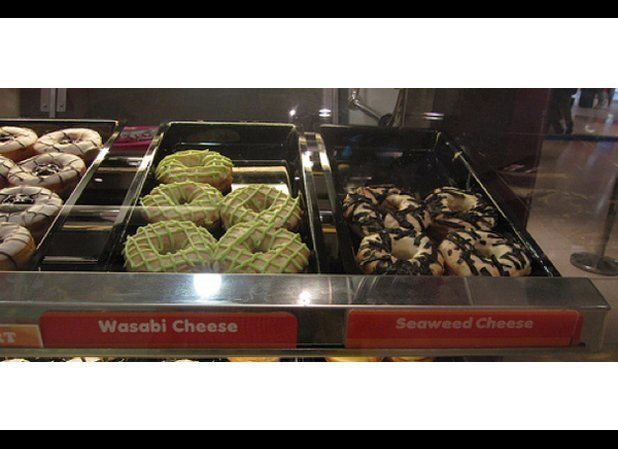 1 / 6
Wasabi-Cheese and Seaweed-Cheese
<strong>Where to get them: </strong>Singapore   <strong>What it is:</strong> No official word on what exactly these creations are, but we imagine they're pretty self-explanatory. Wasabi paste or dried seaweed and cheese on a doughnut? Hmm...   We imagine: Philadelphia sushi rolls (with cream cheese) are relatively popular in America, although not very traditional. Perhaps that’s the appeal?  <a href="http://www.thedailymeal.com/top-picnic-destinations-america-slideshow?utm_source=huffington%2Bpost&utm_medium=partner&utm_campaign=crazy%2Bdunkin%2Bdonuts" target="_hplink"><strong>Slideshow: Top Picnic Destinations in America</strong></a> <em>Photo Credit:</em> © Coltmonday