Eight random areas of downtown L.A. have been marked with what appear to be official city plaques, offering elaborate background information about the dumpsters, city blocks, and signposts to which they are affixed, reports The Lost Angeles Times. The plaques are even equipped with faux-signatures from Mayor Antonio Villaraigosa and MOCA director Jeffrey Deitch, and allude to A-list artists and directors like Yoko Ono, Jean-Michel Basquiat and Werner Herzog as alleged designers of the city's downtown spots.

But the mysterious art project, which goes by the name of "Art Appears," is really just a giant hoax. We hate to break it to you, but the dumpster on Traction Avenue was not designed by Andy Warhol. The so-called "Thirsty Palms" exhibit on 2nd Street? Not by Chris Burden, says Curbed LA.

So what was the point of this gigantic misattribution project, you ask? “His only intention is to bring art and culture to the streets of Los Angeles by any means necessary," states Stephen Zeigler, owner of the L.A. art space 118 Winston, in an email to The LA Times. "Look, the mayor's name has shown up on much worse things than my stupid little signs."

What do you think of Wild Life's signage efforts? Was it a creative way of bringing attention to the oft-overlooked pieces of L.A.'s landscape? Or did the artist go too far?

Check out a slideshow of L.A.'s top street art stories below. 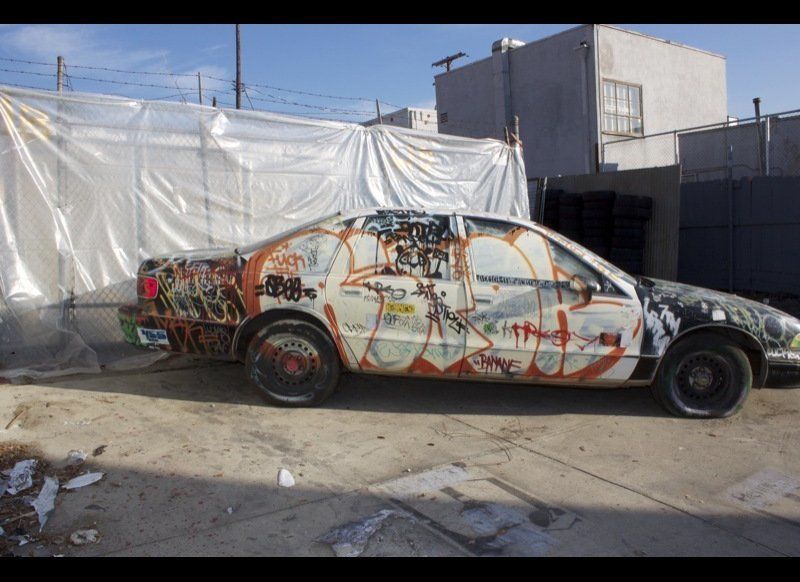 1 / 10
#10 Revok Gets Arrested
After the resounding success of MOCA's "Art in the Streets," a lot of people were discussing whether graffiti and street art were art or crimes. The local news was reporting an upsurge in graffiti around the museum during the exhibition, but the LAPD had no arrests to show for it. Then, one of the artists in the MOCA show, Revok, was arrested and made an example of by the LAPD. Revok <a href="http://melroseandfairfax.blogspot.com/2011/04/real-reason-revok-was-arrested.html" target="_hplink">was arrested</a> trying to board a plane to an art show and was booked on an exorbitant <a href="http://blogs.laweekly.com/informer/2011/04/revok_tagger_arrested_lax.php" target="_hplink">$320,000</a> bail. Revok did some time and eventually got released from jail. Even though he did his time, some city officials have since <a href="http://revok1.com/blog/2011/06/i-love-l-a/" target="_hplink">told</a> the artist that he will never be allowed to paint in L.A. again</a>, legal walls or not.
MELROSEandFAIRFAX