Demographers quantify the growing Latino presence in the United States but the 12 photographers in LATINO/US Cotidiano, curated by Claudi Carreras for the Museum of Latin American Art, qualify it. The work of these established as well as emerging photographers of Latino descent describes the challenges of forging an identity on foreign soil.

The idea behind the show is illuminating. Carreras wisely doesn't ascribe any one trait to the work on display as representative of the Latino experience in America. Instead, he states that the experience is too complex to condense and offers instead a range of responses. The result is a fascinating introduction to the ways in which these artists articulate their new lives.

The exhibition presents images whose subjects go about their daily rounds. They describe what they do, what they see, and what they feel. Besides their Latino heritage, what binds them together is the degree to which they assimilate themselves in a new culture. Sometimes the transition is seamless; sometimes it's not. Some images are sad and refer to memory and emotional loss. Some are upbeat and refer to the future and financial success. And some are humorous. Among the humorous are Carlos Alvarez Montero's series of images of successful people (including a make up artist, an architect, a graphic designer) who, by looks alone, could pass for norteamericanos. Dulce Pinzon's photographs feature people dressed like the superhero that parallels to their particular job: Aquaman, for instance, works in a fish market; Spiderman washes windows; Captain America is a police officer.

Each piece is animated with cross-cultural tensions. It's not the sort of urban melancholy and alienation with which De Chirico imbues his paintings; it's more of a jarring acknowledgment of the way that American culture appropriates and cannibalizes Latino references and turns them into something else. Hector Mata juxtaposes a Coke ad with an image of the Mother and Child; an Apple ad ("Think differently") with a photo of Cesar Chavez; a young woman dressed in traditional Latino garb with one dressed in blue jeans and a stars and stripes shirt; and a poster of Nirvana with one of Frida Kahlo.

Without the context of the show, the people in these images could be of any nationality: there's the experience of a first snowy winter, the hustle and bustle of a street scene, people at work, people at a meal, people at recreation. These are the things that, in the aggregate, define a cultural identity. Add to it the immigrant dynamic of trying to create, refine, or redefine an identity -- or else just fit in -- and you have a show that resonates far beyond the gallery walls to describe the experience of generations of people who, for whatever reason, leave one homeland to create another, not as students or tourists but as citizens. 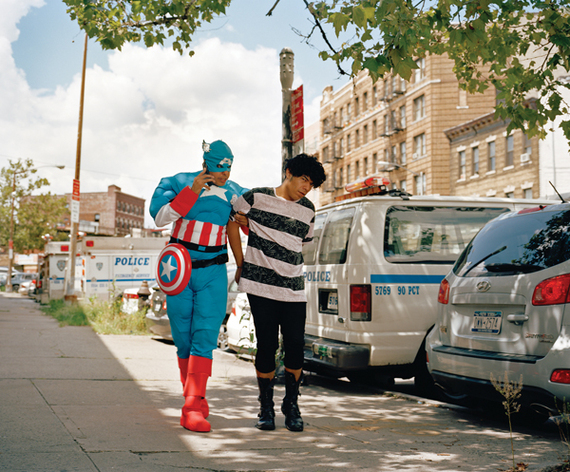