A leopard has been on the loose in the Indian town of Meerut for about two days.

According to the Hindustan Times, at least seven people have been injured in incidents involving the wild animal.

The leopard, which was first spotted in a market Sunday morning, according to reports, likely wandered into the town from a nearby forest. Attempts to catch the big cat have been unsuccessful so far. 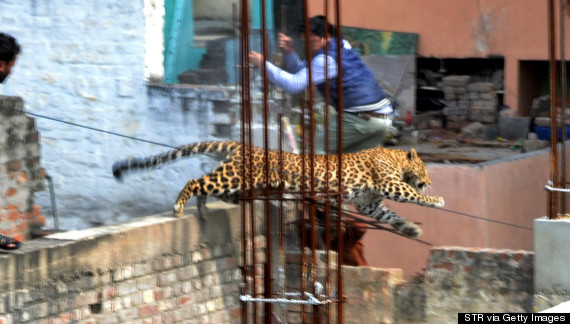 A leopard leaps across an under-construction structure near a furniture market in the Degumpur residential area as a bystander moves out of the way in Meerut on Feb. 23.

"Despite our best efforts, we have been unable to track the leopard down. We have launched a massive hunt for the beast," additional district magistrate S.K. Dubey told the Agence France-Presse.

Schools and shops in the area were closed Monday as a precaution, NDTV reports. Police are also asking residents in the Indian district, home to some 3.4 million people, to stay indoors until the predator is captured.

"The leopard may turn into a man-eater due to violence and hunger. We are appealing to the residents to remain calm so that we could rescue it from its hideout and take it to a safe place," said S.K. Rastogi, the region's chief conservator of forests, according to the Indo-Asian News Service.

A team from the Wildlife Trust of India was enlisted to catch the big cat. Wildlife experts managed to briefly tranquilize the leopard and trap it in a hospital, but the predator recovered and ultimately escaped. 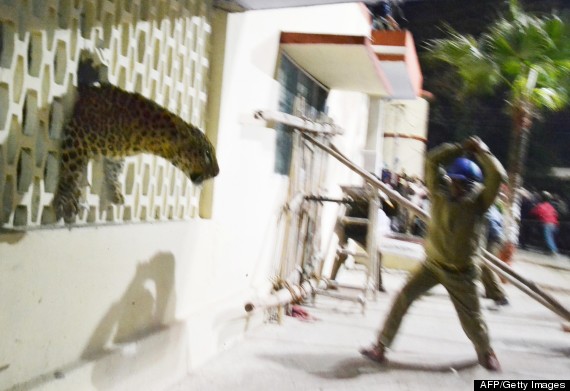 A leopard squeezes through a hole in the wall of the Meerut Cantonment Hospital as an official approaches in Meerut on Feb. 23.

"He got a bit drowsy, but he was so powerful that he could break a concrete wall and jumped out," Mayukh Chatterjee of the Wildlife Trust of India told The New York Times. "In my last 16 years of work, I have not seen such a long and powerful leopard."