By Guy Horton click here for the original article on ArchDaily 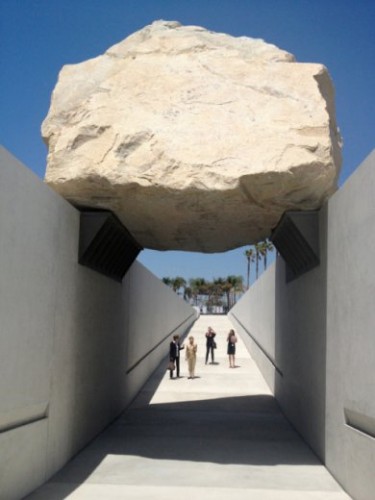 The various feelings of enjoyment or of displeasure rest not so much upon the nature of the external things that arouse them as upon each person’s own disposition to be moved by these to pleasure or pain.

Immanuel Kant, Observations on the Feeling of the Beautiful and Sublime (1764)

Levitated Mass, Michael Heizer’s new installation at the Los Angeles County Museum of Art, is a complicated piece for being what it is: a rock. It’s a very large rock. A megalith, to be precise.

To me, “megalith” conjures something prehistoric, the specter of dinosaurs and the great extinction event that swept them off the Earth. Flowing lava. Desolate pre-human landscapes. Those opening scenes from Stanley Kubric’s 2001: A Space Odyssey. These are things Mr. Heizer, the darling artist of the architecture world, is master of with his land art.

But, there is something wrong with this rock. 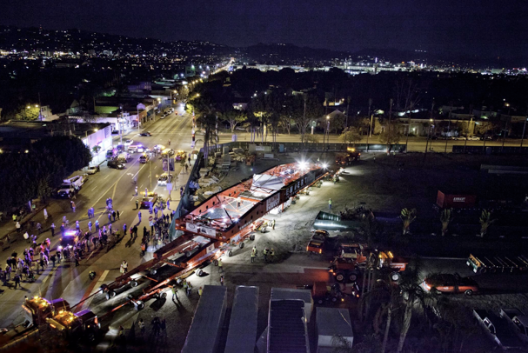 Did Mr. Heizer and the institution that believed in his project enough to wrangle $10 million out of wealthy donors to get it “off the ground” (sorry, that pun was too easy) simply get it wrong? Did they miscalculate the public’s interest? Who were they trying to fool?

It’s not a levitated mass at all. At least not in the literal sense. Los Angeles Times Art Critic, Christopher Knight noted the “frequently voiced sense of being gypped.” Of course, that is what he gets for asking people what they think. Maybe we shouldn’t care what people think. It’s a rock. Who cares what people think about a rock. I certainly don’t care what someone who expects to see a truly levitating rock thinks. As far as I’m concerned, that’s like expecting Prometheus to be good.

It’s a big-ass rock held up on huge thingamajigs that you can walk under. That’s it.

So now the giant letdown has descended over the city like the summer marine layer. The Wilshire corridor flows with disappointment all the way from Santa Monica to the cracked sidewalks of Silverlake. Even homeless people and junkies from Echo Park scoff at the rock as they push their shopping carts past. They feel cheated and they didn’t even purchase tickets. Our sense of reality has been denied its cinematic bump. I was promised a levitating mass and damn it I expect to see a levitating mass! 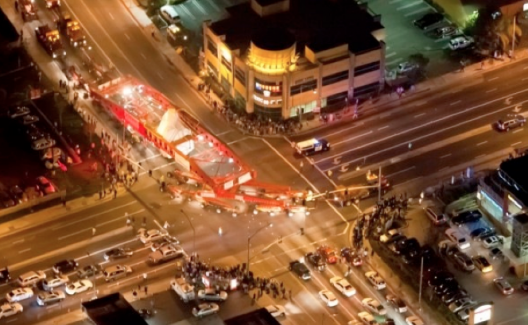 Normally the view for crimes in progress as seen from police and news helicopters. LA Beat.

Is there something wrong with us? Are we getting it all wrong? Do you think this could be possible?

What makes Levitated Mass art (and Mr. Heizer, you can send me that check now) is that it embodies the memory of its journey to this artificial setting where people can now ogle it and criticize it for not actually floating in the air. It’s being criticized for doing what it naturally does.

The brilliance of it, Mr. Heizer, is that it makes people confront their disappointment with reality. And how real is this? This is the very heart of reality and of being human—our potential for disappointment at just about everything. Nature and it’s objects, rocks included, constantly remind us of what is real.

It’s a huge thing that should not have moved, but did, in fact, move—and one might suppose you could move a lot of things for $10 million. It’s like those bits of Moon rock that NASA has been trying to locate. Imagine having a piece of the Moon on your desk. What is awe-inspiring about that chunk of Moon is that it comes from the Moon. It’s this sublime, impossible object resting between your soy latte and your iPad. Think of the intelligence and resources that were burned to get that piece of Moon to your desk. You, mere mortal, don’t deserve it. 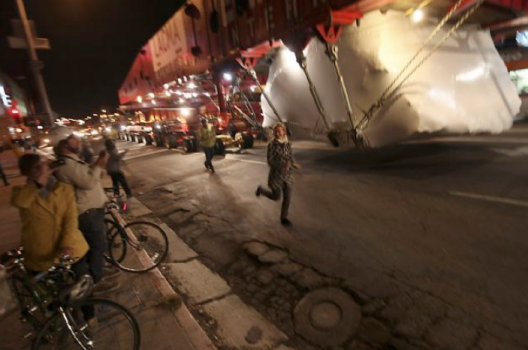 The megalith should have kept moving. This was the lost opportunity for the sublime. LACMA should have kept it strapped to that fantastic red science fiction crane-truck thing and carted it endlessly around the city. Just imagine how hipsters would have followed it like they follow their favorite fetish food trucks. In fact, food trucks would have constantly swarmed around the rock as it moved from neighborhood to neighborhood. It would have constantly snarled traffic. It would have been in daily traffic reports and eye-in-the-sky helicopter news. By day it would be at rest. But by night it would be on the move, drawing the citizens out of their apartment complexes, condos, and bungalows. The poor neighborhoods would welcome it openly as a new friend. The wealthy would have opposed it with their lawyers and city councils. Celebrities would touch it as paparazzi cameras exploded. It would cure the sick, kiss babies, bring prosperity, end war.

This rock, megalith, whatever, may simply be the embodiment of a timeline in which we humans are but a tiny dot at the end. In this sense, it transcends. LACMA, sitting in the midst of still-bubbling ancient tar pits where dinosaur bones were found, seems the perfect home for it. Perhaps calling it Transcendent Mass would have kept the hordes of critics happy and LACMA and Mr. Heizer out of trouble. It’s still just a big rock, but it’s a rock with a message in a weird, human context that reminds of other rocks. Sometimes we need reminding.

*NOTE: The word “gypped” in this essay has been modified to “cheated” due to the word’s derogatory connotation towards the Romani people. However, the use of the word has been maintained in the quote in order to maintain the faithfulness of the original source.

About Guy Horton: Guy Horton, based in Los Angeles, is a frequent contributor to Architectural Record, Architect, GOOD, Metropolis and other publications. His most recent book, The Real Architect's Handbook: Things I Didn't Learn in Architecture School is now available on Amazon. Follow Guy on Twitter @guyhorton.