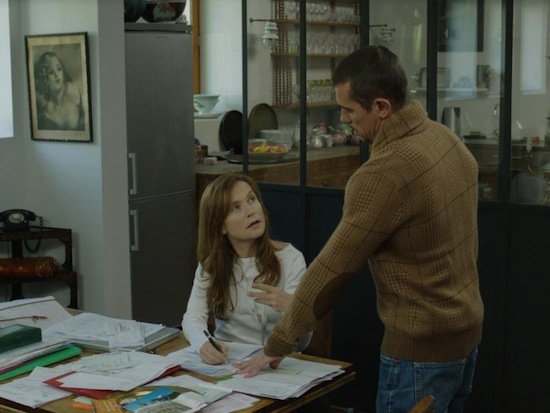 It is exactly at her stroke that her most recent film Abuse of Weakness (Abus de faiblesse) begins. The film is an autobiographical look at the filmmaker's recovery but also the strange 'love' affair, disguised as a professional collaboration, that took place between Breillat (here called Maud Schoenberg) and French con man Christophe Thierry Rocancourt (renamed Vilko Piran), portrayed brilliantly in the film by Isabelle Huppert and rapper Kool Shen respectively.

The film screened at this year's Dubai International Film Festival, with Breillat in attendance and ready to discuss both her film and her life.

While the film's title could be taken to mean something opposite, I found the movie raising in me questions about the power of an illness. It is clear in the story by Breillat -- which is only a bit different from her reality because, as she pointed out "actors bring their own interpretations" to a project and the names of the principal characters have been changed -- that illness demands. It demands of the patient, of course, but it also demands of the people around her, of the family, the friends, and even a seasoned hustler like Vilko Piran.

Maud may be unable, but she's never feeble, and the checks she writes to Vilko, which in the end amount to more than $900,000, are written willingly, with intent, never under duress or stress. She gives, perhaps to keep him around, but it feels a lot more because she needs that control, the only control she has left. She is the one who takes advantage of her weakness, to get what she needs from others. The title seems to plays on the "abuse of power" idea, which is such a prevalent sin in our society.

I sat down with Breillat at DIFF, and it turned out to be a life-changing interview, both inspiring and a bit surreal.

You never feel sorry for yourself?

You can handle anything, that's basically the message of your film.

CB: There is never any message in any of my films. If I wanted to have a message I would be part of an association or I would be into politics to advance the feminist cause or something like that. I make films because that's what I do and I am very sincere.

Why make a film about your experience?

CB: Regarding the stroke and the hemiparesis I did want to go to the hospitals and help other people because I wanted them to see that you could move on. Because when you have it when this happens to you, you have no idea if you are ever going to make it and seeing somebody who has been there and has moved on does help. This is what I wanted to do. And you don't know what a stroke is until you have one yourself, and you don't know what a disability is. So now when I see someone with a disability I know. We look at each other and we know, that we have this.

How difficult is it to direct after your stroke?

CB: I did three other films before this one, you know, there was The Last Mistress, Bluebeard and The Sleeping Beauty, and now this one. So in this short period of time I've made more movies than when I didn't have this. I'm very proud because one year after the stroke I turned in The Last Mistress and I told the professor who healed me, look this is why you healed me, this is why you do what you do. You saved me and now I was able to do this.

Do you think that illness, and you deal with this in the film, has a certain power?

I think most times in American movies they deal with illness in a very terminal way or they deal with it in a you-heal-and-live-happily-ever-after way. You make it very real but also very OK. Almost something that, if it were to happen, is not the end of the world.

CB: It isn't. And here, with you, I don't need to be standing up and to move so I don't even feel it.