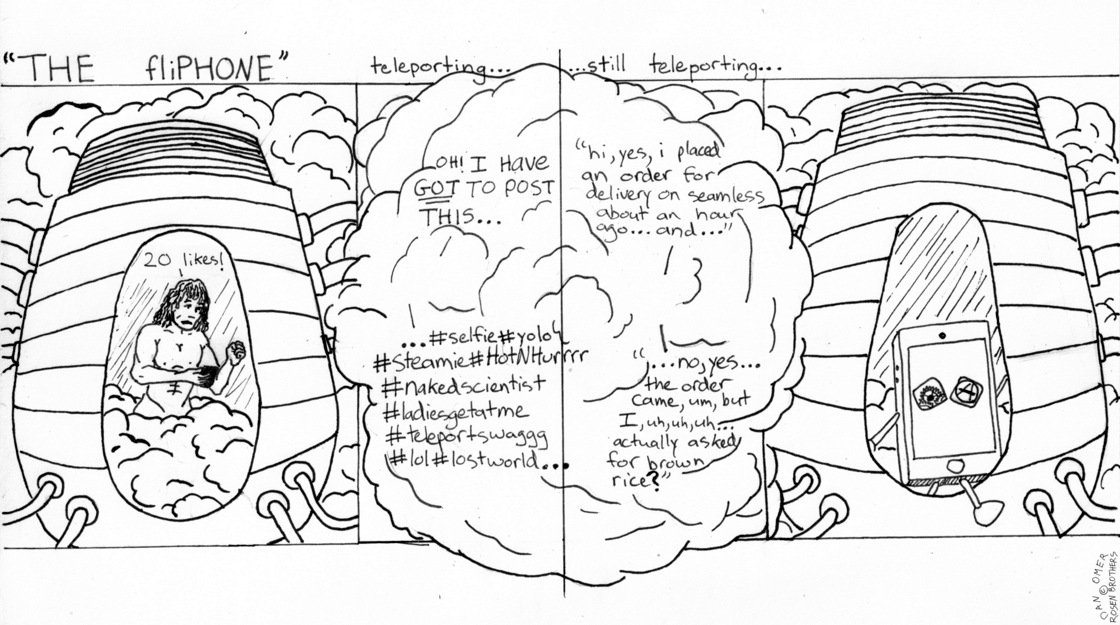 The below might not make any sense even if you have read Part 3-A and Part 3-B of this series--but it definitely won't make sense if you haven't.

If you want to know what will come to pass, simply think of what would be most convenient--that is where this all ends up. Convenience! If anything is our god it is convenience. What wouldn't we do for things to be just a little bit easier? To lighten our affairs by half a discomfort? Yes, we would sacrifice an arm to push one less button. Whatever device can be upgraded, will be upgraded. Whatever can be offloaded to a chip, will be offloaded to a chip. Our newly freed-up capacity? Dedicated to giving device more attention. The more attention we give device? The more distracted/anxious we are. (Note that this is in contrast to a history where capacity freed up by technology was used to explore new avenues of personal and human potentialities rather than to just stare at the emancipator.) Again and again this process repeats, driven by the convenience of convergence...until eventually life is so easy, until so many tasks have been handed off to chip's more capable digits, that distraction is no longer a concern as there is nothing to be distracted from, all attention now centered squarely on device, a final relief achieved. Put simpler: our ability to do a thing deteriorates as we do less of that thing, until eventually we can't do that thing, until eventually we forget we could ever do it, until it becomes vestigial, until our humanity becomes vestigial, as we repeat this with thing after thing, not resting until there is no thing, here quietly surrendering to the Borg collective and becoming thing. Put simplest: convergence of life with device is a logical end to convergence of everything in life on to device.

And we are every day, bit by bit, preparing ourselves for this eventuality, just as technology is every day improving to allow for this eventuality, device every day increasing in ability just as we every day cede it a little more control, each concession conditioning us for the merge and rendering device more vital, numbing us a little more as device gains ever more sense, programming us to never stray too far from our confederate, and so device and we stride into future, proceeding along parallel lines, but our vanishing point the same, we march towards the singular together, an end obscured by the distraction of its path, as we are every day involving device in more and more moments, entwining it with more behavior and more activity, letting it spread into yet another nook or cranny of the human-needs pyramid, pushing it towards equivalence to x or y human action by always using or carrying it during x or y human action, then yielding it yet one more thing to do in our steads, then yet one more ounce of our attention, sundry covers letting us every day deny a little more of our grotesque humanity, each electronic action and technological advance signifiers of our power, of our distinction from animality, an addition to our invincible armor of theoretical immortality, behind which we every day avoid a little more human contact, a few more instances of emotion skipped, letting that skill slowly slide away as well, the more we connect the...more we drift apart...easier to interact with device than to feel, easier to let interactions be handled by device...uhhhh...than to interface with people, people hiding a little more behind metal and wire...soon metal and wire hiding in us...us looking ever-more at screens instead of present faces...non-face-to-face conversations moving further...further from...hearing or at least reading...a clear human voice...from complete sentences...and thoughts...until we have nothing...to worry about...till...hierarchy...human needs...self-actualization...forgotten...yet...yet...strange-type...Maslow-transcendence...achieved...networked-entity...all-helping-all...working...as...1.

So forget the constant chatter about robots taking our jobs and robots gaining sentience and passing Turing tests and then passing us -- taking over, in essence. These fears are misplaced. Robots are not going to take over; we will just become them. We have rolled out the welcome mat. We have opened the front door. We are each our own Trojan horse. And every day we usher in another little electronic soldier--

--There is no way to argue with each individual step forward, no way to look ten strides ahead or even one foot in front. Each advance is clearly better, clearly makes things easier than before, and so we take it, we have no choice. We have no visibility. We beat on, boats accordant to current, hurtling blindly into the future. We rub away at friction. We scour inhumanely at friction, merciless, until friction itself is wholly abraded, till life is glossy but the wheel don't turn no more.

Please Note: Parts 3-A, 3-B, and 3-C, taken as a unit, represent a retroactive framing of mental experiences. But biological memory is frail and mine has had two years to wither. A more accurate telling of thoughts I thought at the time I decided to abandon phone might well read: "me can't concentrate. me don't sleep so good. people annoying. must smash slab. raaaah!"

In any case, either a) the immediately-above quotation or b) everything that came before it in this multi-sectioned Part 3, becomes very clear to one when one begins to experiment with phone abdication if one is just a bit crazy. So, descending down either hysterical rabbit hole a) or obviously paranoid rabbit hole b), one had no choice--one decided to pull the plug.