By this point, Richard Phillips has painted a ridiculous amount of celebrities, from Warholian versions of Deepak Chopra to a radiating portrait of Miley Cyrus. This time around, though, he worked with Lindsay Lohan, who will soon star as Liz Taylor in an upcoming Lifetime telefilm.

On June 11th, Phillips will premier "First Point," his second short film starring LiLo, at Art Basel in Switzerland, which is being presented by Gagosian Gallery. Clocking in at 5 minutes and 34 seconds, "First Point" is a sort of "surf noir" offering, influenced by David Lynch and Jim Freeman. Since this is Phillips' first attempt at film, he roped in the surf filmmaker Taylor Steele to co-direct. Thomas Bangalter from Daft Punk did the ominous score, while Jay Rabinowitz -- who worked on "Requiem for a Dream" and "The Tree of Life," edited the short film. We interviewed Phillips to find out more about the film and his work. Scroll down for a slideshow. 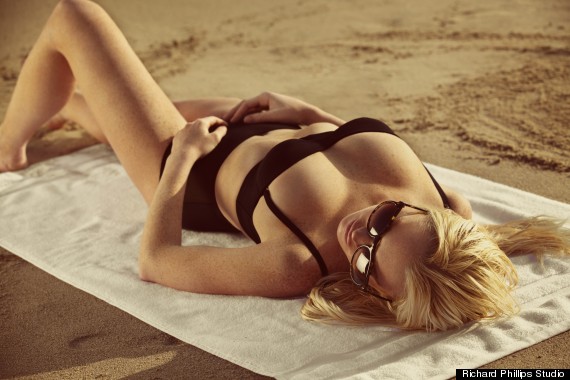 HP: When did your obsession with surfing begin?

RP: I guess in 2000 is when I began surfing in Rockaway. In October. I surfed through the winter, so it’s getting right into the winter suit and taking the train out there. I just got back from living in Hawaii and during that time I was bodyboarding and not surfing, and when I came back to New York with a friend, he said this bodyboarding thing is not going to work here, so I caught my first wave on my birthday. You have to respect [the ocean] in every way.

HP: Why did you decide to make this film?

RP: I had been a judge at the New York Surf Film Festival and I had the great fortune of meeting Taylor Steele (there). When I was asked to make a film for the Venice Biennale, I had never made a film before. I called up Taylor and asked if he would collaborate. Lindsay had that moment free, so everything came together. We shot at Malibu, but we shot in front of an infinity pool. In August, we had this idea to create a surf-noir film, where we would combine an omnious, taking the good vibes energy of the surf film and turn it on its head. My favorite film score is the one Thomas Bangalter created for "Irreversible." The soundtrack absolutely defines the daymare into nightmare feeling you get from the film.

HP: This is billed as a "surf noir" film. What were your influences?

RP: It was inspired by 90s noir of "Lost Highway." The other film was “Free and Easy” by Greg MacGillivray and Jim Freeman. The style of the surfing imagery comes from that underground surf film. Not so much the "Endless Summer," but that surfers could understand. You balance Lindsay’s iconic presence with power and surfing -- creating those oppositions. In surfing you have action scenes vs. scenes on the beach. The whole thing comes unhinged as it folds into this nocturnal realm, and Lindsay enacts the nightmarish noir person.

Since it’s appearing at Art Unlimited (at Basel), the idea of flow and what people could see in a week’s time governed the necessity to keep it a short film. The dialogue is Tomas’ soundtrack, which is quite present as a voice in the film. 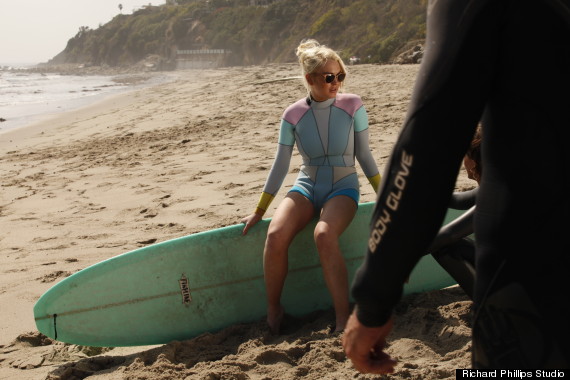 HP: How was Lindsay involved, exactly?

RP: The way that the collaboration has gone through the art director and sound and Lindsay’s participation, it’s not a portrait of but an agreed upon collection of efforts. It’s a more powerful, deliberate sense of beauty and determination. It’s a repudiation of what I said earlier of "wasted beauty." This is the undoing of the artist and muse relationship. It’s a conscious effort between myself, my co-director, and Lindsay. I had a lot to learn from her when it came to working in the film environment. It was how she was able to work in front of the camera, to create these personas.

HP: What is the art world afraid of?

We’re at an odd point, where art is checked in terms of what is definable. When we can’t determine what is art -- when you get to that point where we’re not sure, that’s the greatest likelihood that we’re actually experiencing something great. But I think that’s what the art world is most aftraid of, because you lose that security. Then we don’t know how to assign evaluation, whether it’s cultural or otherwise. In a way, this film was meant to be a destabilizing artwork. It’s not a film and it’s not a video piece. It exists in another area. It’s a zone where we were free to work.

All photos in the slideshow below are courtesy of Richard Phillips Studio.