Bonedigger is a five-year-old, 500-pound male lion. Milo is a seven-year-old, 11-pound Dachshund.

After dinner, Milo licks the food from Bonedigger's teeth.

Shih Tzu Saves a Kitten, Nurses Her Until Help Arrives
Amazing: Oklahoma Tornado Survivor's Dog Is Rescued During a TV Interview
Can You Name Your Dog's Unique Physical Features From Memory?

Some relationships between animals of different species are "unlikely" -- your average duck making friends with a puppy, for instance. Some are "unexpected" -- let's call that anything involving a housecat.

But a lion making lifelong friends with three wiggly Dachshunds? That's WTF, front to back. Sorry for the veiled profanity, but look at this: 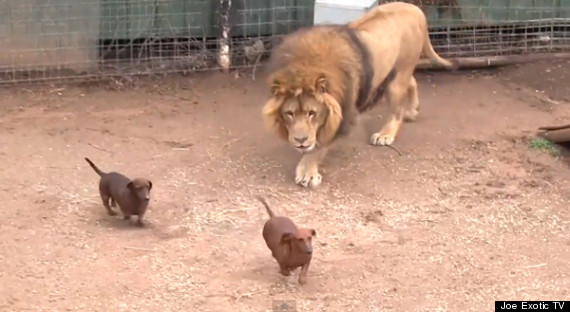 According to the Daily Mail, Milo and Bonedigger have been "inseparable for the past five years at the the Garold Wayne Interactive Zoological Park in Wynnewood, Oklahoma. Joe Schreibvogel, an animal expert who regularly posts videos from the park at YouTube's JoeExoticTV, first introduced his four Dachshund puppies to Bonedigger when he was just a 4-week-old cub.

Bonedigger is mildly disabled, thanks to a metabolic bone disease, according to Today.com. Schreibvogel figures this explains the bond the group has developed. Something has to. “The dogs thought it was just a big puppy and have loved each other since,” he told Today.com. “I also think they know the lion is not as normal as the rest.” 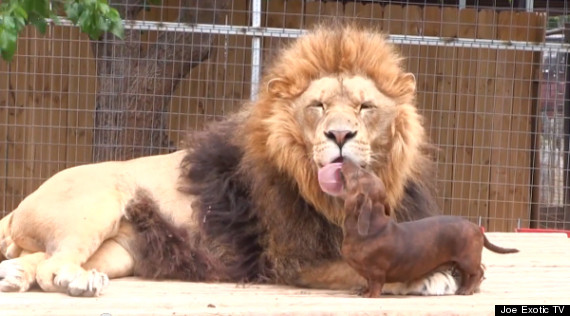 The dogs and Bonedigger also share big, hearty meals of raw meat. They spend their days with Bonedigger in his yard, and because he's a 500-pound lion, what Bonedigger wants, Bonedigger gets.

“You do not ever try to take his dogs out of the yard,” Schreibvogel said. “[It] makes him very mad. They sleep on top of him.” 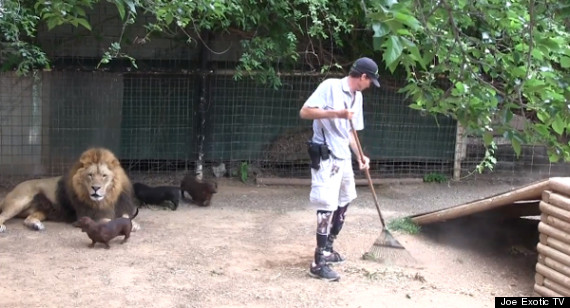 Milo, for one, may think there's more to him than 11 pounds of wiener dog. According to Schreibvogel, "Milo does his best to copy Bonedigger when the lion tries puffing to communicate with other lions in the park."

What's puffing? That's the growl lions use to speak to other prides, which can be heard more than a mile away.

Imagine: In Oklahoma, a Dachshund named Milo is talking to lions in a zoo in their own language. I wouldn't be surprised if the lights are burning late at Pixar this week. 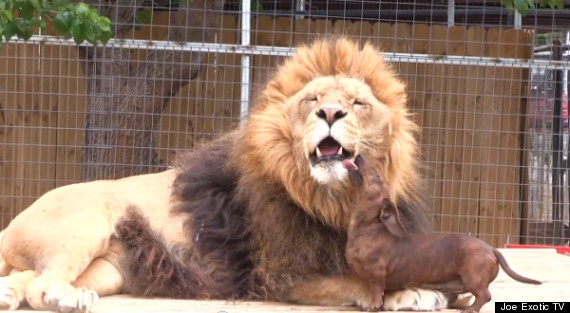 Editor's Note: HuffPost further investigated this zoo and found that it has a troubled history. Read more here.