The thing about opening your mind up to a new story idea is that you once you do it, there's no going back. All of a sudden, everything seems like it has to do with the new idea. Songs and lyrics and billboards and articles and movies and books and people seem to come at me, out of nowhere, non-stop. It can be hard to breathe. I grab at all these things and try to capture them before they are lost in the noise and shuffle of life, and I do this with little notebooks.

I keep little notebooks everywhere -- in my purse, in my car, on my nightstand. My favorite notebooks are the thin, soft Moleskine notebooks that come in colors, now (green and red and pink!) but they are expensive. 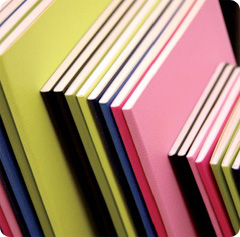 I reluctantly bought several sets of Moleskine knock-offs at Forever 21 last year for about $1 each, which are nowhere near as inspiring, but they are serviceable. I live in Los Angeles and have two teenage girls who are very involved in sports and who attend a school that's not in the neighborhood where we live, so I drive a lot. All this driving isn't such a terrible thing because I get to spend a lot of time with my kids, and because the car is a great place for ideas to brew.

Just this week, I wrote down two different series on NPR that might have something to do with my story. And last night, on the way to teach a writing workshop, I casually mentioned to my sister that I might need her help in coming up with a playlist for one of my characters' life, and I ended up with three pages of leads. My sister is a professor of music theory at a university in Connecticut. She is one of the smartest people I know. My main character is (I think! I think!) going to be a classical music critic. (This is the way I have decided to get into the Joshua Bell article, because the thing that I love about that article is how many people walked by the famous violinist as he plays. What if walking by really mattered to one person. What if walking by was the worst thing this person could have done? I am trying really, really hard not to be afraid of writing a classical music critic, and the existence of my sister is one of the things that is helping keep this fear at bay. My sister, bless her heart, did not demand to know who I thought I was writing a music critic. She did not tell me that I was a fool.)

The leads my sister gave me include a university program where critics are trained; a historical figure who is said to be the father of music criticism; several books about music theory; a significant event that happened in the world of classical music right around the time of the Joshua Bell piece; several musicians who might be of interest to my character; and a bunch of blogs and websites. My notebook is very full -- and no, I don't take notes while driving. In this particular case, I pulled of the Pacific Coast Highway into a Macy's parking lot, and took notes while my sister casually tossed off all this amazing knowledge.

And so I have a lot of work to do. You could, of course, research until the cows come home. I won't. I will sift through my notebook, see what intrigues me, follow the leads, see which pieces speak to me, and take up these pieces as I build this character and this story in my head.