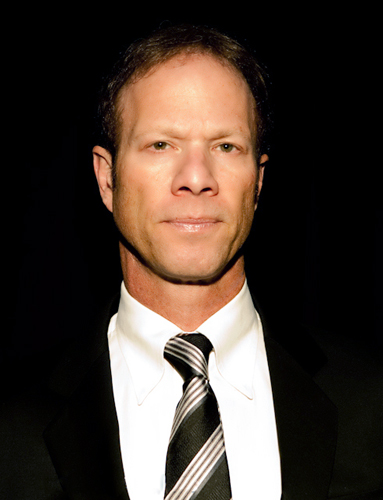 Talk to Greg Sims for just a few minutes and it is clear you're talking to a man who loves films and happily devotes his days to making them and seeing that they get shown. For those reasons, Tuesday, March 21, 2012 was a red-letter day in his life -- the day Behind Your Eyes, produced by his company, Vesuvio Entertainment, became available in the 33,000 rental kiosks owned across the United States by Redbox. It is, for any independent film producer, a very big deal.

Born in Paris, Sims lived in Okinawa and moved back to Virginia. After he graduated from high school there, he drove to Los Angeles when he was 18 to get into the movie business. He went to college at USC and UCLA.

He got a job with Heatter-Quigley Productions on their show Hollywood Squares. "My education in show business began with meeting Paul Lynde and Don Rickles. In truth, Rickles was a nice guy, always asking, ' Hey, kid, did ya eat?'"

He found Lynde, famous as the funny, pleasant personality who occupied the center square, quite the opposite in reality. "That taught me that things weren't always as they seemed."

A bonus of that job was that Hollywood Squares taped at NBC across the hall from The Tonight Show, starring Johnny Carson. "I got to meet everyone," Sims says. "I met John Wayne, Ed MacMahon, Doc Severinson and so many others. It was great."

The next step on Greg Sims' career path was a job with Samuel Z. Arkoff's American International Pictures (AIP). Arkoff became famous in the 1950s for the new genres he brought to the screen -- the beach party and biker movies as well as horror films like I Was A Teenage Werewolf starring newcomer Michael Landon.

"For a kid like me -- who always dreamed of movies -- this was a dream come true," Sims says. "I made copies, worked in the TV division and, finally, I worked for Sam, screening potential movie properties. Then I had the chance to work for Dino De Laurentiis and, coming full circle, I worked on the remake of King Kong with Jessica Lange and Jeff Bridges. De Laurentiis was certainly one of the great modern-day producers. I learned a lot there."

After working for De Laurentiis, Sims form his own company and began to manage talent and get into production. He also conceived projects and contributed to screenplays.

The first of these was for a film called Return To Horror High. The 1987 movie tells the story of events that took place when a serial killer claimed a number of victims at Crippen High School in 1982. (The high school is named after Dr. Hawley Harvey Crippen, a murderer who was hanged in London in 1910.) Now, a film crew is at the school making a movie about the murders. Also there is -- you guessed it! -- the murderer and the film's cast and crew begin, one-by-one, to be killed.

The movie is notable for a few reasons. It was George Clooney's first-ever role in a theatrical film. He is murdered in the first few minutes but, nonetheless, it marked a significant milestone in his career. The movie also featured Maureen McCormick, who was Marsha in The Brady Bunch as a cop. The title of the movie also attracted notice as there was never a film called Horror High. 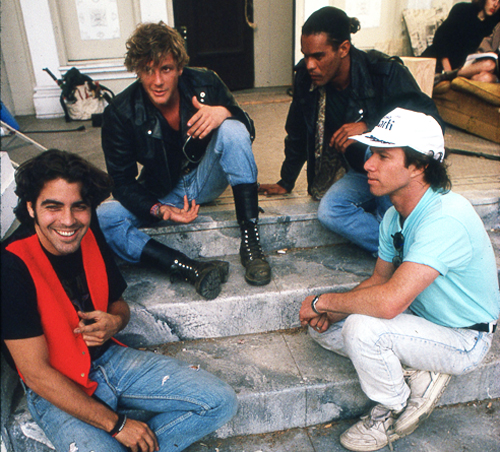 Two years later, serving as executive producer, Sims cast Clooney and Doug Savant, (who is, at the moment, playing Tom Scavo on Desperate Housewives), along with ) actor/surfer Vince Klyn and DeeDee Pfeiffer, in Red Surf, the story of two surfer dudes who deal drugs so they can afford to continue surfing. (In photo from left are Clooney, Savant, Klym and Sims.)

Among the supporting players in Red Surf were Gene Simmons and Phillip McKeon who, along with his sister Nancy, was managed by Sims.

Sims continued to work in film as producer and as the creator of stories that he turns over to screenwriters. A few years ago he formed Vesuvio Entertainment Corporation, a producer of independent films that also oversees the process of finding distributors.

Behind Your Eyes was a 2011 project from Vesuvio. In a Meet The Parents story gone horribly wrong, Behind Your Eyes tells of Erika and Steven, a couple in love, who set out on a weekend trip to visit Steven's family. Of course, on the trip they meet up with the bad guy -- played by screenwriter Daniel Fanaberia -- and the mystery and mayhem ensue.

Sims says the decision to release the movie on DVD was, in today's market, the best possible route to getting it seen.

"The business model has gone away from brick-and-mortar to kiosk," he says. "By nature it will be limited to bigger movies but there is still a latge audience for indie movies like Behind Your Eyes.

"Redbox has arrangements with studios about the movies they can take in their kiosks and there are very limited slots for really independent films. When they buy a movie like ours to be in every machine, it's a big deal for us because it immediately generates revenue and is accessible to film watchers on a national level."

He adds, "I don't dismiss the idea of the big tentpole movies" and says he's very pleased that his film hit Redbox the same day as Girl With the Dragon Tattoo and The Muppets. because it proves "there are other ways to reach people. Like a lot of businesses, this business is probably more difficult than ever but, in some ways, it's more rewarding for me.

"When people realize that not everyone can make a real movie with a limited budget and have a success as I have with Behind Your Eyes, it's very rewarding. We've found success spending less money and will, dollar-for-dollar earn more money.

"You know, I've even gotten letters from people telling me my movies influenced them to make movies, just like King Kong influenced me. That's a great feeling."

Here is a video from Voice of America about low-budget films focusing on Sims and Vesuvio Entertainment: