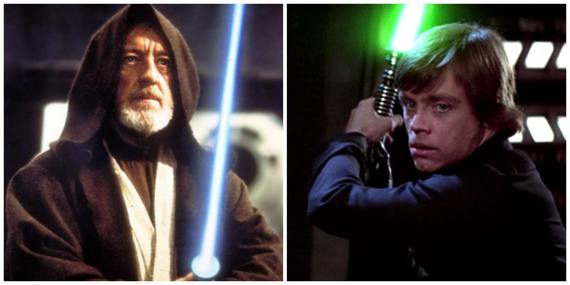 How Luke Skywalker was able to build a brand new lightsaber before Return of the Jedi may now have a real-world explanation. The original prop wielded by Mark Hamill in Star Wars Episode VI: Return of the Jedi in 1983 was in fact a repurposing of one of the lightsaber props used by Alec Guinness as Obi-Wan Kenobi in the original Star Wars Episode IV: A New Hope in 1977.

Collector Brandon Alinger presented Luke Skywalker's lightsaber to Mark Hamill on the actor's streaming show Mark Hamill's Pop Culture Quest. Though Hamill initially thought the prop was a "replica," Alinger confirmed it was in fact one of the actual props used by Hamill during the filming of Return of the Jedi. But, there was a wrinkle. Alinger also revealed it was "the same prop that was used by Alec Guinness in the first movie." This means Luke Skywalker was holding what was in essence, his master's lightsaber, albeit with some modifications and a different colored blade. 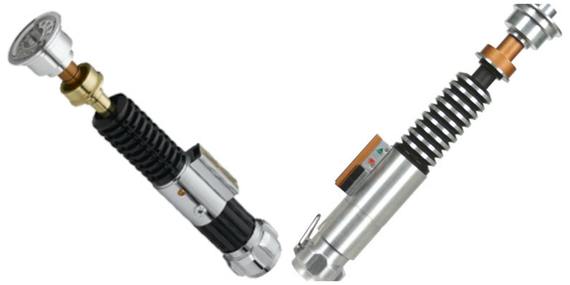 Hardcore Star Wars fans have known for a long time that Luke's second lightsaber looked way more like Obi-Wan's than his first one did. Of course, Luke didn't build his first lightsaber. It belonged to his father, Anakin Skywalker, which is why Kylo Ren says "that lightsaber, it belongs to me!" in The Force Awakens; Anakin is Kylo's grandfather. So, presumably, the older Luke Skywalker who meets Rey will still have this second Obi-Wan-looking saber in Episode VIII. This means that he totally doesn't need the one Rey is offering to him at the end of The Force Awakens. 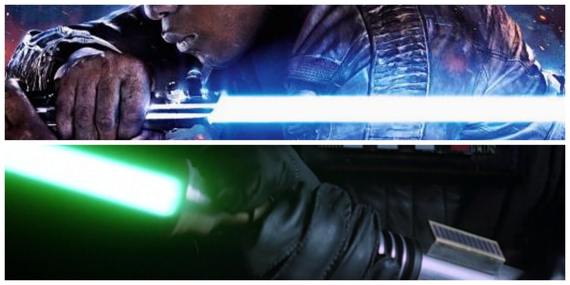 The in-universe presumption for why Luke's second saber looks like Obi-Wan's has always tended toward Luke finding extra lightsaber parts and diagrams in Obi-Wan's abandoned hut on Tatooine. These designs and parts resulted in Luke making a saber more like Kenobi's than his father's. Some fans even theorized that the reason why the blade of this saber is green and not blue is because Luke appropriated an old kyber crystal that was initially used to power Qui-Gon Jinn's lightsaber. This last detail rests on the assumption that Obi-Wan kept Qui-Gon's lightsaber after he used it to slice up Darth Maul in The Phantom Menace.

While this year's The Last Jedi probably won't have a flashback about Luke building his Obi-Wan-esque second lightsaber, it is possible that the upcoming Obi-Wan episodes of Rebels could give fans a glimpse as to what other lightsaber-building stuff Obi-Wan had stockpiled in his desert home. For now, speculation about the histories and origins of various lightsabers will likely continue well past the conclusion of the current Star Wars trilogy.

MORE FROM INVERSE:
Everything We Know About the Young 'Han Solo' Movie
'The Last Jedi' Might Mean Rey Is a New Kind of Force Warrior
Buying and Selling the Most Valuable 'Star Wars' Toys on eBay
A 2017 Theatrical Re-Release of 'A New Hope' Needs to Happen
7 'Star Wars' Concept Art Ideas That Should Be in the Movies