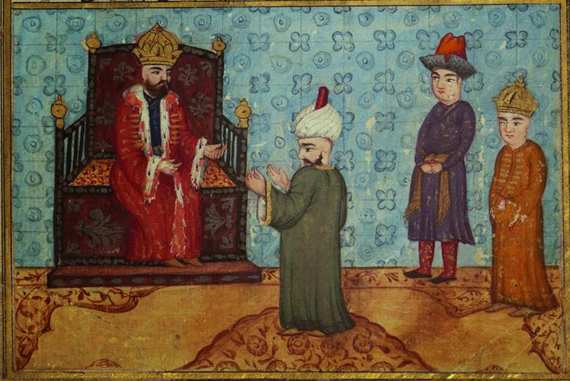 What did people used to eat in the past? Why? And how did they eat? What meanings did they attribute to ingredients, dishes, culinary techniques, and table manners? Who was invited to the table and who was excluded? Where did the food come from and how did it get to them? These are some of the questions that food historians strive to find answers to. As I have argued before in this blog, it is not just curiosity that pushes us to explore bygone practices and habits revolving around producing, trading, eating and cooking food. We also explore these past practices to reveal interesting aspects of historical events and phenomena that we would otherwise not fully appreciate. In fact, at times it was the need for regular supplies of food that determined important decisions regarding economics, commerce, war, and peace.

This semester I am teaching a course on Food History and Globalization, where we look at how commodities and cash crops such as spices, sugar, coffee, or tea actually shaped the destiny of entire populations and whole nations. We could not comprehend many significant cultural-historical events, such as slavery, many aspects of the development of banking and insurance, as well as numerous technological breakthroughs in transportation without assessing the impact of food production via the development of plantations in the Western Hemisphere in the late fifteenth century. In class, students learn to approach historical sources, trying to make sense of concepts, languages, and cultures that may be quite foreign. As we discuss readings and other materials, we reflect on how we get to know what we know from the past. While written texts provide much information, we also examine objects, archaeological remains, landscapes, and images. What we end up with are often the perceptions and the world views of the people that wrote journals, built machines, and painted visual representations of their reality.

It is not easy to reconstruct whole worlds out of fragments. It is a painstaking endeavor that requires curiosity, reflection, familiarity with the existing research, the careful evaluation of sources, comparisons with other available materials, and overall a whole lot of patience. "Foodways and Daily Life in Medieval Anatolia: A New Social History" by Nicolas Trépanier provides a great example of this kind of meticulous yet passionate work in food history. His topic, food in Turkey around the fourteenth century, may come across as arcane to many readers on this side of the Atlantic - whether researchers, writers, or food professionals. To be fair, I suspect that not many in the Old World are conversant with it either. However, this is a crucial period in which the Greek Byzantine influence was waning, while the Turkish tribes from Central Asia that had started penetrating the Mediterranean world in the previous centuries were settling down and establishing polities that, over time, would give origin to the Ottoman Empire, an important player in world history till its demise in 1922.

Like any culture in transition, medieval Turkey is extremely fascinating and Trépanier provides us a detailed account of the food-related aspects of daily life. He does it by explaining at each turn what sources were available (very little visual material, it turns out), how he used and interpreted them, and how he cross-examined them with other sources to assess their validity and the information they provided. Besides its methodological qualities, the book is also interesting because the Anatolian society of the time was dealing with many phenomena that we now consider as the result of modern phenomena of globalization: although they had various origins, spoke distinctive languages, worshipped different gods, and enjoyed unequal access to power, the populations of Anatolia found ways to share the same geographical spaces, both in urban and rural environments. Foodways were both intensely indigenous and exposed to the vagaries of migrations, wars, and trade. The elites - and to a certain extent, also the commoners - were influenced by very different cultures (the Arab, the Persian, and the Turkish ones), negotiating their own local responses and values.

Trépanier provides the portrait of a world that is much less simple and monolithic than we would suspect. His choice of using food as an entry point allows him to make complex issues accessible to us, while helping us to better appreciate how food, rather than just being the reflection of a society, actually constitutes one if its main engines.