It was a discovery of mammoth proportions.

On Wednesday, Russian scientists reported that they had extracted blood from a 10,000-year-old woolly mammoth carcass discovered frozen in the Arctic. The researchers estimated that the prehistoric mammal was about 60 when it died, according to a statement issued by North-Eastern Federal University in Yakutsk.

The mammoth was found in a remote location in the New Siberian Islands in the Arctic Ocean, where temperatures can dip to minus 10 degrees Celsius (about 14 degrees Fahrenheit).

"We suppose that the mammoth fell into water or got bogged down in a swamp, could not free herself and died," expedition leader Semyon Grigoryev told the Siberian Times. "Due to this fact the lower part of the body, including the lower jaw, and tongue tissue, was preserved very well."

When Grigoryev's team broke the ice around the mammoth's belly, they were surprised to see dark, thick blood flow out. 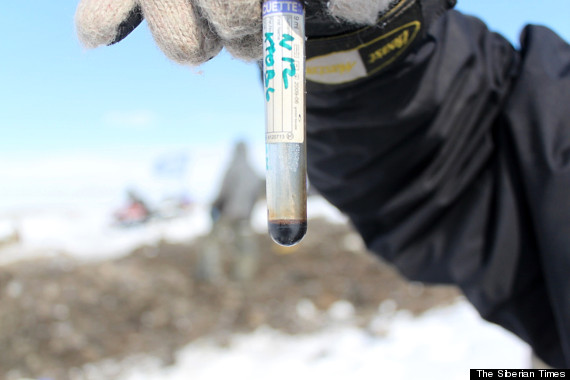 "This is the most astonishing case in my entire life," Grigoryev told the Agence France-Presse. "How was it possible for it to remain in liquid form? And the muscle tissue is also red, the color of fresh meat."

In addition to finding blood, the Russian team recovered teeth, bones and muscle tissue, according to the statement. The samples were sent to the university labs in Yakutsk.

Discovery of such well-preserved samples may one day help researchers clone a mammoth, according to the AFP. In 2012, North-Eastern Federal University signed a deal with the South Korean foundation that cloned the world's first dog in 2005.

A separate 2012 AFP report details what cloning a mammoth might entail:

By replacing the nuclei of egg cells from an elephant with those taken from the mammoth's somatic cells, embryos with mammoth DNA could be produced and planted into elephant wombs for delivery ...

Some researchers have suggested that mammoth blood acted like a sort of antifreeze, allowing the creatures to keep their bodies oxygenated in freezing and high-altitude climates, the Guardian reported.