NASA's Mars rover Curiosity has detected no methane in its first analyses of the Martian atmosphere — news that will doubtless disappoint those who hope to find life on the Red Planet.

Living organisms produce more than 90 percent of the methane found in Earth's atmosphere, so scientists are keen to see if Curiosity picks up any of the gas in Mars' air. But the 1-ton rover has come up empty in the first atmospheric measurements taken with its Sample Analysis at Mars instrument, or SAM, researchers announced today (Nov. 2).

"The bottom line is that we have no detection of methane so far," Chris Webster, of NASA's Jet Propulsion Laboratory in Pasadena, Calif., told reporters today.

"But we're going to keep looking in the months ahead since Mars, as we all know, may yet hold surprises for us," added Webster, who is instrument lead for SAM's Tunable Laser Spectrometer. [Mars Methane: Could It Mean Life? (Video)] 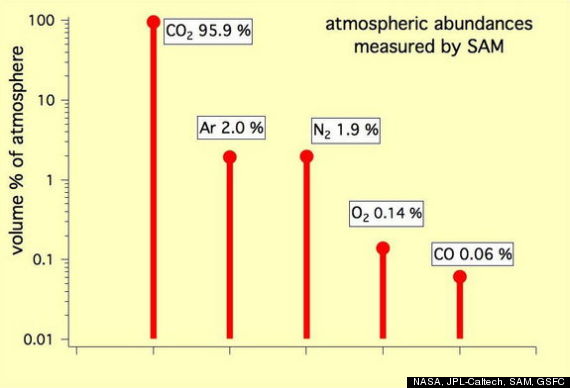 This graph shows the percentage abundance of five gases in the atmosphere of Mars, as measured by the Quadrupole Mass Spectrometer instrument of the Sample Analysis at Mars instrument suite on NASA's Mars rover in October 2012.

Scientists have detected methane in Mars' atmosphere before, using a variety of instruments on the ground and in space. But measured concentrations of the gas have been quite low, ranging from 10 to 50 parts per billion or so.

The lack of a detection by SAM does not necessarily mean these previous observations are wrong, researchers said. Methane concentrations may vary somewhat by region and over time.

"At this time, we don't have a positive detection of methane on Mars," said Sushil Atreya of the University of Michigan, a SAM co-investigator. "But that could change over time, depending on how methane is produced and how it is destroyed on Mars."

Possible non-biological sources of methane include comet strikes, degradation of interplanetary dust motes by ultraviolet light and water-rock interactions, researchers said. And the gas can be destroyed by photochemical reactions in the atmosphere or absorbed by the Martian surface.

Scientists believe that Mars' methane "sinks" are quite efficient, removing the gas from the atmosphere every few hundred years. That means any methane present in the Red Planet's air was likely generated recently.

Learning about the atmosphere

The new atmospheric measurements — based primarily on a few sniffs Curiosity took at a site called Rocknest — could also help scientists better understand how the Red Planet may have lost much of its original atmosphere, researchers said. Mars' air is currently just 1 percent as thick as that of Earth.

In measurements of atmospheric carbon dioxide, SAM detected a roughly 5 percent increase in heavy carbon isotopes, compared to estimated isotopic compositions at the time Mars formed. (Isotopes are versions of an element that have different numbers of neutrons in their atomic nuclei.)

This suggests that the top of Mars' atmosphere was likely lost to interplanetary space at some point, researchers said.

Curiosity landed inside Mars' huge Gale Crater on Aug. 5, kicking off a two-year mission to determine if the Red Planet could ever have supported microbial life. The rover carries 10 different instruments, but SAM is Curiosity's heart, taking up more than half of its science payload by weight.

SAM is designed to detect organic compounds, the carbon-containing building blocks of life as we know it. The mission team hopes to feed the first soil samples into the instrument in the coming weeks.

We should expect to hear much more from Curiosity, and from SAM, as time goes on, scientists said.

"Let me emphasize — these are the first measurements," said Michael Meyer, Curiosity program scientist and lead scientist for NASA's Mars Exploration Program. "We can look forward to more discoveries as the instruments are tweaked, the measurements refined and as we move through time and the seasons of Mars."

1 / 48
Curiosity's First Color Photo
Curiosity snaps the first color view of the north wall and rim of Gale Crater, where NASA's Mars rover landed Sunday night. The picture was taken by the rover's camera at the end of its stowed robotic arm and appears fuzzy because of dust on the camera's cover.
NASA