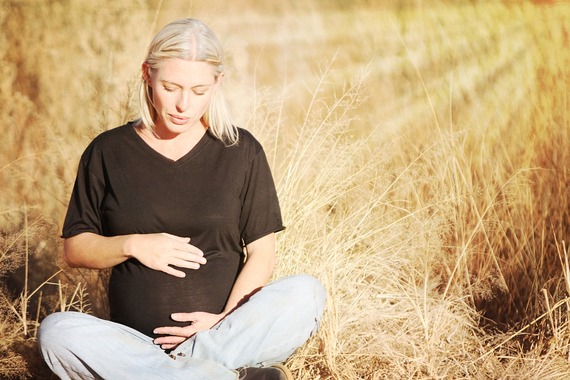 When I was pregnant nineteen years ago I wish my doctor had warned me I might be at risk for postpartum depression.

Her words wouldn't have freaked me out, they would have helped me cope when the darkness did indeed hit.

I wish during my 6 week check-up (when I was at my private worst) my Ob-Gyn had handed me a mental health screening and even if I lied on every question, she still explained how the "baby blues" are different than depression.

Hopefully now more health care practitioners will talk to women so those who suffer know they're not bad people or rotten mothers or God knows, alone.

The fact is worldwide 10% of pregnant women and 13% of postpartum women have a mental disorder and the numbers are even higher in developing countries.

While maternal mental illness is often lumped into the catchall "postpartum depression" it's more complicated than a single kitchen sink diagnosis.

Symptoms can show up during pregnancy or long after birth and they don't always look like depression, sometimes they look like:

Alone, or in combination.

So of course we hide our depressed, dark, anxious or obsessive thoughts.

Of course we privately sob and internalize and ache and disconnect. We suffer until our kids and our partner suffer too.

And while the following factors don't predestine women, they put them at higher risk for maternal mental illness:

• Sensitivity to hormonal changes during pregnancy and after birth
• A difficult or traumatic pregnancy and/or childbirth
• A personal or family history of depression or other psychiatric disorders
• A history of early loss, trauma or abuse
• Stress such as job loss, a move, illness, death, divorce, financial or relationship issues, a premature or sick newborn, leaving the workforce to be at home, etc.

"A complex interplay of genes, stress and hormones cause maternal mental illness, scientists say. Hormones go up more than a hundredfold," explains Dr. Margaret Spinelli, the director of the Women's Program in Columbia University's psychiatry department. "After birth, hormones plummet, a roller coaster that can "disrupt brain chemistry."

And in my case, check, check and check.

• Ever since I was a teen I had (and hid) mild depression and anxiety.
• My mother suddenly abandoned our family when I was five.
• My labor and delivery were long, brutal and complicated.
• I have a pituitary disorder that makes me sensitive to hormonal changes.
• When my daughter was 9 months old I left the workforce but never adapted to being at home (aka guilty ambivalence because I was grateful but mostly miserable).

Fortunately my pregnancy was relatively smooth and somehow the complex cocktail of surging hormones made my moods pretty stable.

But once I delivered and my hormones plummeted, so did I.

One morning when my daughter was two months old I leaned over to my husband during breakfast and with zero emotion said, "I feel like I want to be dead but don't worry, I know I need to take care of our baby so I won't do anything stupid. I just don't want to feel like this anymore."

I was convinced I'd made a mistake (Good mothers don't want to die, right?). I felt desperate, hopeless and alien, like my emotions had been hijacked by an invader.

The other day I asked women on a popular motherhood forum how they felt about screening.

"Screening would help (mothers) receive help earlier. I've been depressed before, and it took months to be diagnosed, let alone receive the appropriate treatment. A postpartum mom has a lot on her plate and she may dismiss the need to get help for herself over the needs of a newborn. (The screening) could be included in the baby's first and subsequent checkups. It does not necessarily have to be done by an OB."


A few were concerned the screening questions might label some mothers with a false diagnosis.

"I'm worried that you can't diagnose issues on the surface without digging deeper. A lot of questionnaires are worded in a way that people would get flagged when they shouldn't be."


One woman who conducts screenings emphasized that a piece of paper can't and shouldn't, replace skilled empathy.

"I find it to be a helpful tool not just for screening but as a conversation starter about the hardships of motherhood and parenting.

I think however, handing someone a paper and having them fill it out isn't a substitute for human interaction...I know after a few moments of talking to a new mom if she's coping well or not. I'd hate to see relationships replaced by screening forms."


A few questions can never capture the complexity or transience of a mother's emotional highs and lows. But I wish my doctor had talked to me; I wished she'd handed me a screening when I was pregnant and again during my 6 week check-up, long past when the postpartum blues should have ended.

At the time I was too ashamed to say unprompted, that I felt like I wanted to crawl into a hole and die.

Instead I choked back tears when my doctor asked her generic, "So, how are you?" I told her what I wanted to believe, that even though I was exhausted and completely overwhelmed, I was mostly okay.

When I was at my worst I called my reproductive endocrinologist who put me back on hormone replacement therapy (HRT) that I needed for my pituitary disorder.

HRT helped my acute depression but did nothing for my long term symptoms which were a combination of biochemical and situational factors.

When my daughter started Kindergarten it helped that I had more time to myself. I started to write. I exercised, changed my nutrition and switched to bio-identical hormones (vs. synthetic). I worked with holistic doctors who treated me for severe adrenal fatigue and who suggested targeted adrenal and neuro-supportive supplements. In time the combination drastically changed my moods.