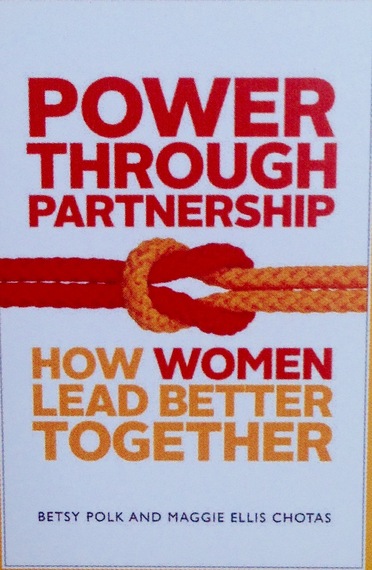 My first blog for Huffington Post was linked to the launch of Sheryl Sandberg's book Lean In so it feels fitting to write a post about Power Through Partnership: How Women Lead Better Together, by Betsy Polk and Maggie Ellis Chotas. Where Lean In restarted the conversation Power Through Partnership continues it, providing a missing link by identifying concrete ideas and solutions that actually empower women to be able to contribute even more by doing so together.

A strength of this book lies in the detail that they glean from their interviews with 125 female business partners across many different fields, including their own 12 year collaboration as Co-founders of The Mulberry Partners, a consulting firm, in Chapel Hill, North Carolina. But, for me, its true power lies in reading between the lines about how the partnership framework can be applied both formally and informally across the corporate infrastructure. Women, and companies who want to hire and retain them, should take note, this book is a welcome game changer.

As a Senior HR Professional, entrepreneur and co-author myself, I always read with interest anything that helps encourage the female contribution. But it wasn't until I read Power Through Partnership that I really reflected on what made my leaning in possible, enjoyable and fulfilling -- partnerships. Although the focus of Power Through Partnership is about more formal, female partnerships in business and leadership, and that they deserve to be as visible and as celebrated as say Ben and Jerry or Brin and Page, while reading I found myself reflecting on the informal partnerships that had guided me along the way, especially at the start of my career.

The first of these was choosing a husband who fully supported me and shared the load 50/50. Juggling various childcare options in the early years meant taking turns getting into the office for 9am, in the pre-Blackberry days, and leaving at 4:45pm to catch the train in order to get back to the nursery for the late pick-up at 6:00pm. The only way that I even knew that this was possible was because my boss at the time was juggling exactly this type of set-up after returning from maternity leave.

Another female Sales leader that I worked closely with also openly shared her routine. I vividly remember her recounting a story about putting her daughters in the bath, while she put on a face mask and sat beside them, describing it as her "spa time." They were open and honest in their examples and most importantly they were happy. They showed me that balancing a career and family could be possible. They didn't know it but they were an example of one of the most important takeaways from Power Through Partnership; "Partners are everywhere."

I also count many male leaders as partners in my success and choosing to work for companies that actively developed their female talent and measured not only how many women were achieving leadership roles, but also the positive bottom line impact more diversity can have. As a Human Resources Director at a company demonstrating leadership in this area, General Electric, I was directly involved in this type of talent management activity and was also a direct beneficiary of the positive and supportive culture that it created. A simple yet powerful experience was regularly hearing from male and female leaders about how they defined and created their personal work-life balance.

Polk and Chotas point out the importance of "debunking the myths" that so often accompany the media's stereotypical image of women working together. Just search for the term 'mommy wars' or watch any reality TV show with women in the cast and you get the idea. What makes for compelling TV does not make for a great way to work, nor is it a realistic portrayal of the positive female partnerships that are possible. Polk and Chotas propose the need for more of a "sistership" mentality in order to really benefit from all that women have to contribute, rightly suggesting that this is a "better way to work and lead together." I prefer the term that they chose for their twitter handle "powership" to describe "sistership" and some of its benefits:

We want to change the world, transforming the way in which women work by spreading the message about the tremendous benefits that can be realized in healthy, female partnerships, such as flexibility, confidence, freedom, support, mutual accountability and happiness.

Reading Power Through Partnership also reminded me of the direct benefits that I experienced during a more formal partnership arrangement while co-authoring Inspiring Global Entrepreneurs with a friend from college, Meghan Peterson Fenn. Both Meghan and I enjoyed the positive energy that came from our collaboration, especially after working alone as sole proprietors. When I was diagnosed with stage III, triple-positive breast cancer, during the final editing stage, I can say with confidence that if I had been working alone, the book would never have seen the light of day. Polk and Chotas share a similar example of when Chotas was diagnosed with leukemia and yet their business was able to continue thanks to the fact that they were working in a supportive partnership. At the same time reading this book also helped me to realize that I had more to contribute to the corporate world and that I was ready to return.

Polk and Chotas wrote Power Through Partnership because "no other resources carry this message for women. Sure, plenty of valuable sources make the case that life is tough - exhorting women to lean in, to stop trying to be Wonder Woman, or to let go of being overwhelmed . But how are women supposed to do that? Concrete ideas and solutions are needed."

It has been nine years since the article "Off Ramps and On Ramps: Keeping Talented Women on the Road to Success" was published in The Harvard Business Review yet applying for jobs after a career break has helped me to realize that little has changed when it comes to the recruitment infrastructure.

I don't take this lack of change as a sign that corporations don't want talented women back in the workforce. I take this as a sign that more women need to be contributing to the design of the computer software that is so heavily relied upon to filter candidates in and out. This example alone demonstrates to me the heavy price that we pay as a society for not having more women contributing fully.

Wouldn't it be great if there was a question on these online applications asking if you have taken a career break? Wanting to know what you gained from it? And how the company you are applying to could benefit? A very simple and inclusive fix that more accurately represents the diversity of the applicant pool. Imagine the day when they actively ask "Would you consider a job share?"

Polk and Chotas make a strong case that by working in partnership women can be more authentically themselves, they can achieve more together than they could individually because of "mutual accountability" and ultimately this helps them to be more creative and more successful.

Since I live near the authors I have been able to go along to a couple of their book launch events where they practice what they preach by highlighting and supporting local female partnerships. One such example really stood out to me, the case of two female sous-chefs who work in "powership" by sharing their position and making it possible for them to cover the hours of a full-time restaurant schedule, part-time.

This example reminded me of yet another Harvard Business Review article I read years ago when it came out in 2005, "Two Executives One Career." The message from the article, and the job share example that Polk and Chotas celebrated, was that both pairs brought the solution to the table after a successful track-record. We need to hear a lot more about how women are working in partnership both formally and informally in order change the landscape and fully benefit from all that women have to contribute.

I am heeding the powership "Call to Action" because as Polk and Chotas point out:

Partnership works too well for women to remain lost under the radar.

I look forward to the day when all job descriptions, performance reviews and company value statements include the word powership. Most importantly when more company cultures actively reflect the many different forms that working in powership can take. Powership, it truly is the game changer that has been missing.