John and Meryl Ferraro brought fifty new toes and fifty new fingers back to their home in Fullerton, Calif. Wednesday. Despite having been advised to reduce the number of fetuses she was carrying, Meryl successfully gave birth to quintuplets on Sept. 26.

“We figured we would eventually forget their names, so if we yell ‘GRACE,’ they’d all come running," Meryl Ferraro, 39, said to CBS.

And including 2-year-old big sister, Gianna, the bunch becomes "Grace Plus One." John Ferraro has been writing about the family's journey throughout the pregnancy on their blog, graceplusone.com.

Initial examinations led Meryl Ferraro and her doctor to believe that she was pregnant with twins. She was shocked when, at eight weeks, an ultrasound revealed five heartbeats. And then came the advice that no mother wants to hear.

Three specialists recommended that she reduce the number of fetuses she was carrying, according to the family's blog. But this did not align with the Ferraro's Christian beliefs.

"We decided it was not our place to choose which of our babies would live and which one would die," John wrote on the blog. "If God was giving us five babies, there was a reason. We made a decision to see them as a precious blessing from God above and not as burdens we needed to eliminate."

Meryl had to undergo surgery in June to prevent early labor. And in September, the couple flew to Mesa, Arizona, where a doctor who specializes in high-risk pregnancies, Dr. John Elliott, delivered five healthy babies, John wrote.

Now the couple will rely on volunteers to help with feedings, naps and diapers. And they say they've been overwhelmed by the generosity of strangers and friends who have donated time, diapers, clothing, furniture and cash -- in some cases, through the family blog.

The Ferraros broke a record by coming home from the hospital eight days earlier than other quints, according to the proud father.

"God has blessed them richly. Let the fun begin!!," he wrote. 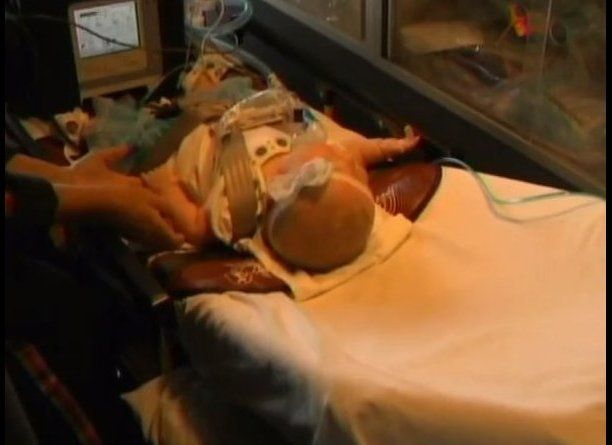 1 / 10
Olive Rutowski, Born At 23 Weeks
Olive was born prematurely at just 23 weeks and after several medical complications, was finally sent home from the hospital in time for her first birthday. <a href="https://www.huffpost.com/entry/olive-rutkowski-miracle-baby_n_1797485" target="_hplink"> <em>How Olive was finally able to be reunited with her mom. </em></a>
WANE