With Dylan Farrow's allegations that her adoptive father Woody Allen sexually abused her when she was 7 years old back in the spotlight, old interviews and articles detailing both Mia Farrow and Woody Allen's sides of the story are rapidly resurfacing. Dylan's open letter in the New York Times, and the heated discussion surrounding her claims, prompted CBS to upload their 1992 "60 Minutes" interview with Allen, in which he denies molesting Dylan, and claims the allegations brought against him is part of Mia's plan to exact revenge for his affair with her adopted daughter Soon-Yi Previn.

In the interview, Allen told correspondent Steve Kroft that several weeks before Dylan made her first allegations, Mia called him up and in the course of an "argumentative phone call," Allen claimed she told him, "I have something very nasty planned for you." Allen also said that on many occasions Mia had told him, "You took my daughter, and I'm going to take yours."

During the interview, Allen dug up a Valentine's Day card he said Mia gave to him six months after the molestation allegations came to light, which can only be described as a frightening thing to receive.

"She didn't send it to me; she gave it to me. And I said, 'Oh, thanks,' you know. And I went downstairs, I got into my car and I opened it up, and there ... was a very, very, very chilling Valentine, meticulously worked on," Allen revealed. "I mean, I -- one hesitates to say psychotically worked on -- you know, a Victorian Valentine and photo of the family, and through all the kids was thrust needles and a steak knife stuck through the heart of the thing." 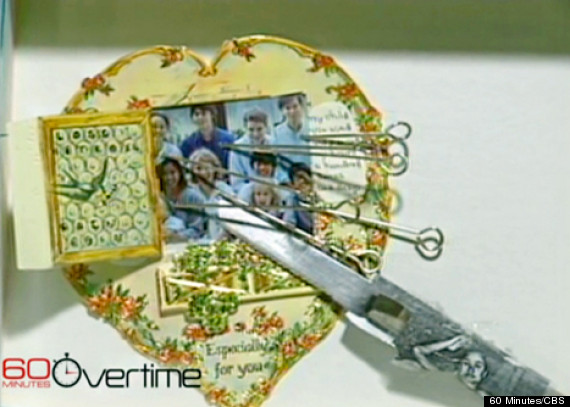 "Once my heart was one and it was yours to keep. My child you used and pierced my heart a hundred times and deep," was written on one side of the card, and looking closely one can see that Soon-Yi's photo was taped around the knife that had been plunged through Mia's heart. Allen revealed he "got scared because, you know, that was -- that was one of the times that I thought, 'My God, this is really' -- you know to -- if you look at the thing, it's quite frightening."

In the years since the allegations, Farrow made sure there are no more family photos with Allen pictured. Mia's son Fletcher Previn told Vanity Fair in October 2013 that he has Photoshopped Allen out of all their family photos and edited him out of family videos so none of them have to see him again.