American workers' productivity has soared over the last 30 years, but that extra output hasn't translating into higher earnings for the American middle class, according to a report released this week.

A 40-year-old male high school graduate earned less in real terms in 2009 than he would have in 1980, according to the report by the Employment Policy Research Network, a collective of labor, management, economics, employment and sociology researchers from 50 universities brought together by the nonpartisan nonprofit Labor and Employment Relations Association.

As middle-class Americans have lost out economically over that 30 year period, productivity, corporate profits and the incomes of America's rich have all soared, the report said. By 2009, 1 percent of the population lived on 21 percent of the nation’s total annual earnings.

The study warned that the average middle-aged man can no longer expect or assume his children's economic situation will be better than his own.

Declining middle-class wages have also helped erode the federal government's solvency, the study's authors said. It might even be causing a decline in the marriage rate.

"As the link between productivity and wages broke down, families and the government turned to borrowing and credit to support living standards," Frank Levy, one of the study's authors and a Massachusetts Institute of Technology professor of urban economics said in a statement. "These options are no longer sustainable."

Starting in the 1970s, a series of economic challenges -- inflation being most prominent -- left companies scrambling to reduce costs, according to the study's authors. Workers, their pay, their unions and their legal protections, along with laws limiting the way that companies could do business, all became the target of corporate attack.

Soon enough, companies slashed employees and wages and developed new products and services that could often be produced by cheaper workers overseas, the study's authors said. The demand for American blue-collar workers, in short, fell far behind their supply.

Executives who conceived of and managed corporate restructuring efforts -- job cuts, taking on and managing debt and wringing more work for what was effectively less pay from workers -- have been rewarded handsomely, the report found. At the same time, the middle class has been asked to do more while receiving less pay, shoddier benefits and no assurance that their jobs will not be sent abroad in the next round of corporate restructuring. 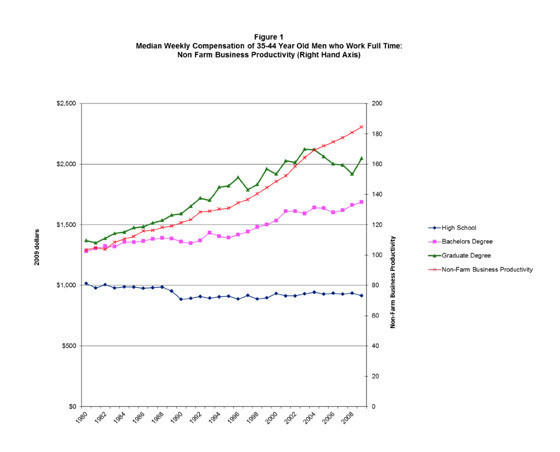