Mona Eltahawy meets me in Harlem at one of her favorite bars, the place she goes to watch and enthusiastically live-tweet soccer matches. We sit outside and keep our jackets on. Hers is a bright coral pink, as is her hair. The Egyptian-American writer tells me it’s a deliberate choice. “My nieces love pink and they're both fierce girls, so I love the idea of co-opting pink from princesses to protests,” she says.

In the U.S., Eltahawy is currently one of the most prominent female voices speaking out on the contemporary Muslim world. She juggles many titles: Feminist. Award-winning writer. Media personality. And a new label she’s only recently felt comfortable adopting -- activist.

Not surprisingly given her high profile, she’s become a polarizing figure among foreign policy wonks and journalists. Some are uncomfortable with the self-given authority with which she speaks on the subject of Muslim women. Former Bush administration speech-writer Joshua Treviño has called her “not that bright.” Or the classic putdown for outspoken women -- she’s crazy. Another knock on her: She never shuts up. As journalist Jeremy Scahill memorably tweeted: "I think Mandela talked less about his 27 years in prison than @monaeltahawy has about her 22 hours in a holding cell."

In her most recent exploit to upset the Twitterati, Eltahawy was arrested last September for vandalizing an anti-Islam subway sign in New York City that compared Muslims to “savages.” Critics on the left and right pounced, chiding her for breaking the law and disrespecting the First Amendment. A month later, when asked about the incident, Eltahawy sighs.

“Hate crimes against Muslims have tripled since 2010, and we on the left are sitting here arguing over vandalism,” she says, shaking her pink curls. (Eltahawy is 45, but looks about a decade younger. She credits her Egyptian blood.) “This idea that’s there’s only one way to protest inequality is just ridiculous. There’s a spectrum of protest. People have to protest in the best way that suits their conscience and principles.”

Days after her arrest, the very real consequences of anti-Muslim sentiment were brought violently home: Eltahawy’s brother’s local mosque in Toledo, Ohio, was set ablaze. According to the FBI press release, the man muttered “[expletive] those Muslims,” while he was being booked. 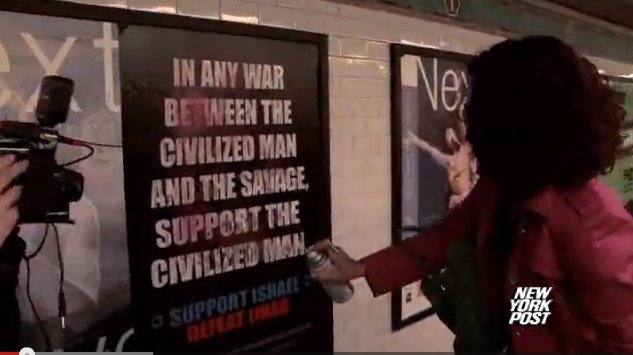 “If you don’t connect the dots between hate speech and hate crimes, like that mosque burning, nothing will change,” Eltahawy says. “Right now, it’s socially unacceptable to be overtly racist against blacks unless it happens to be against the president, but it remains socially acceptable to be racist and bigoted against those who are Muslim or who look like Muslims, which are basically brown people.”

She admits that the haters, especially on Twitter, sometimes get to her. “When you need to go out there and fix shit in the world, Twitter can be awful,” she says. “There’s so much bullying. The whole point of Twitter is to give everyone a voice.”

Eltahawy, who was born in Egypt, began her career as a traditional news reporter in the Middle East, writing for Reuters, The Guardian and the International Herald-Tribune. In 2000, she moved to the United States and became a naturalized citizen.

But her career path changed direction after the terrorist attacks of 9/11. Confronted with a country suddenly hostile to Muslims, Eltahawy quit reporting to become an opinion writer. Freelancing for The Washington Post, she drew attention to the post-9/11 treatment of Muslim-Americans, including her brother, a cardiologist living in Michigan who was subjected to special registration as part of the Patriot Act. “9/11 killed objectivity for me,” she says.

When I met Eltahawy, she was readying to move back to Egypt, now in the process of building a democracy after the ouster of long-time dictator Hosni Mubarak.

Eltahawy rolls up her sleeves so I can see her forearms.

In November of 2011, months after Mubarak was removed from power, she traveled to Egypt and was on the front lines of the clashes between protesters and the military. The country was again embroiled in protests to ensure the demands of the revolution -- economic justice and civil and political rights for Egyptians -- were fulfilled. Infuriated by the army's attempts to delay the political transition to civilian rule, protesters re-occupied Tahrir Square. Dozens were killed in a bloody crackdown.

On Mohamed Mahmoud Street in Cairo, Eltahawy was arrested. She was beaten and sexually assaulted by riot police, and her arm and wrist were broken. 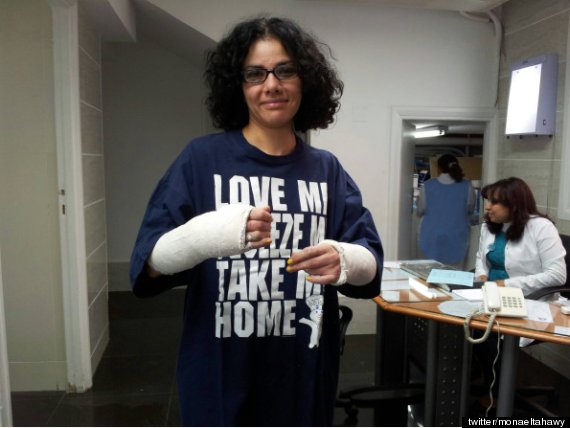 After three hours in detention, she was able to surreptitiously borrow a phone and tweet what had happened: "Beaten arrested in interior ministry." Within an hour, her tweet reverberated around the world. #Freemona trended. The U.S. State Department got involved and after 12 hours of detainment, Eltahawy was let go -- battered, broken and utterly defiant.

The whole time I was thinking about article I would write; just you fuckers wait.

“Something snapped in me then,” Eltahawy says. “Looking back now, especially at what’s happened over the past year, the writing just became not enough.”

After her arms healed, she got a tattoo of Sekhmet, the fierce ancient Egyptian goddess of retribution on one forearm. With the head of a lion, “she’s not a bullshit goddess,” Eltahawy says. She plans to get the name of the street she was attacked on and the words for freedom in Arabic tattooed on the other arm.

“I’m not emotionally healed from what happened to me,” she says.

Since the assault, Eltahawy has acquired a new interest: poetry. She reaches into her bag and pulls out The Captain's Verses, a collection of poems by Pablo Neruda. Flipping through the pages, she points out some of her favorite poems. “Pablo Neruda, he was political and personal. He was very much of the revolution,” she says.

This is new for her, reading poetry. Nowadays she doesn’t leave the house without it.

“I need joy in my life. I’ve been through a difficult time,” Eltahawy says. “The revolution has to be about joy, otherwise it’s not a revolution worth having.” 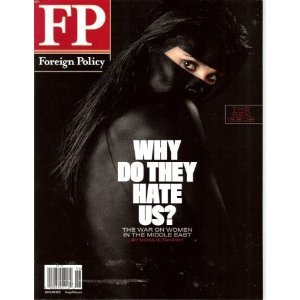 Eltahawy’s first big article after the attack, provocatively titled "Why Do They Hate Us?" was a brutal indictment of misogyny in the Middle East and ran on the cover of Foreign Policy’s "Sex" issue.

In it, she railed against a culture of discrimination against women in many Arab countries, citing female genital mutilation, so-called "virginity tests," child marriage, sexual harassment, domestic violence and the inability of many women to dress, travel, marry or divorce freely.

Framed as “men vs. women” the piece ignited a firestorm of criticism. Eltahawy welcomed the backlash. “I wrote that piece very angrily because it was the first one I wrote with all 10 fingers and it hurt like hell,” she says. “I was in a lot of pain. And a lot of anger. And a lot of emotional trauma. It was very personal and political. And I wrote it to provoke.”

The sensational artwork accompanying the story didn’t help. An image of a naked woman slathered in black paint, invoking a burka, graced the cover.

Some critics worried that Eltahawy minimized a complex issue by writing in such broad strokes. “Eltahawy entirely neglects the socioeconomic roots of gender inequality, the rise of authoritarian regimes in a post-colonialist context, the remnants of dehumanization and oppression from colonialism, the systematic exclusion of women from the political system or those who are used as convenient tools for the regime,” opined Moroccan-American writer Samia Errazzouki on Al-monitor.com. “There is more to gender inequality than just ‘hate.’”

American essayist Katha Pollitt defended Eltahawy for her blunt tone in an email. “The great feminists of history have not been reluctant to call men out—Mary Wollstonecraft, Elizabeth Cady Stanton,” Pollit wrote. “There is a place for a firebrand, for someone who just cuts to the chase and says the way women are forced to live in Egypt, Saudi Arabia, Yemen is crap. It's refreshing to read an article that doesn't make all the nods in every direction to ward off accusations from nationalists, religious, other activists, etc.”

She commended Eltahawy for asking why men were so stuck on controlling women, especially women’s sexuality. “I actually thought Mona's question was a good one: 'Why Do They Hate Us?' Unfortunately, she didn't answer it.”

Eltahawy is telling me about her plan to turn her Foreign Policy essay into a book when she’s interrupted, mid-sentence, by a young man who has come off the street. “Are you Mona?” he asks shyly. “I’m a huge fan of yours.” Reshwan, 24, a Pakistani living in Harlem, thanks her profusely for her work standing up for women’s rights. “I really appreciate what you do,” he says. “Really. Thank you.”

He ambles off down the street and Eltahawy looks a bit startled.

“This is why I’m going,” she says. “The fight for women’s rights, secularism, sexual freedom, individual freedom, that’s the fight that people are fighting bravely that I want to join.”

Since the revolution, women’s rights in Egypt have not improved, she says.

“We have a president from an ideological background that doesn’t believe in equality for women," she says.

“But what has changed is women’s ideas and society-at-large ideas about what women can achieve,” she says. “You can’t undo the sight of millions of women in the street as part of the revolution, you can’t forget that, you can’t tell women that you weren’t a part of this.”

Since our meeting, Eltahawy has traveled to Egypt twice. Her last visit coincided with the second anniversary of the uprising that ousted Mubarak, and was marred with reports of rampant sexual assaults on female protesters.

In an email, Eltahawy wrote that the assaults were obvious attempts to terrorize women out of participating in protests.

She lamented the lack of public outrage over the attacks. "A 19-year old was raped with a blade, for f***'s sake! What will it take to tip Egypt over that edge of enough?! We're not yet at the Delhi moment where we saw thousands upon thousands protesting that horrific gang rape."

Still, Eltahawy said she was encouraged to see grassroots groups fighting on the ground to keep women safe.

"Here's to rage and disobedience on a mass scale."